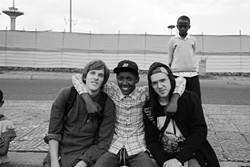 In 2011, Cambrian Sean Stromsoe was invited to Ethiopia with three days’ notice. He served as part of a film crew with a NGO (non-governmental organization) that was tackling elephantiasis. While abroad Stromsoe met Abeneezer “A.B.” Temesgen, an Ethiopian teen who exhibited some pretty dope skate skills. The two hit it off and soon A.B. was helping Stromsoe with his video and photo shoots, as well as showing him around and serving as interpreter. Through A.B., Stromsoe discovered a rising skateboarding culture in Ethiopia, and the type of passion inherent in youth.

Kids around Ethiopia share the few, tired boards they have. There are no skate parks, like in the states. As a relatively new sport to the region, skateboarding is misunderstood by some of the older generations. Yet, they skate on.

Recognizing a need for a skateboarding community, Stromsoe and A.B. founded Ethiopia Skate: dedicated to promoting skateboarding in Ethiopia. The project aims to build a park in Addis Ababa, Ethiopia, (and eventually branching out to other cities) complete with rails, ramps, and a half-pipe; as well as boards for skaters to borrow, foreign volunteers to administer first-aid and help them learn English, and perhaps even a place for kids to study.

Stromsoe says that such a park will provide the community with  “a positive place for them to learn and grow.”

And also a place for clean play.  The region hosts the popular use of khat, a flowering plant native to the horn of Africa that, when chewed, has amphetamine-like effects on the user. Skateboarding, and more importantly a safe place to do it, provides kids and teens with something else to do to pass the time, as well as a platform to make new friends and establish community.

Stromsoe says that the greater Ethiopian community and culture welcomes the sport and the idea of a park, but with government agencies preoccupied with the nation’s rapidly developing infrastructure, putting such a project into motion will require some serious up-front capital. If Ethiopia Skate can present a solid business plan, they have a really good chance of receiving government assistance. And so Ethiopia Skate has launched a fundraising campaign to generate funds. The goal is $60,000. It’s a big number that Stromsoe admits is an arbitrary estimate based on the assumption that the land and materials will be mostly donated, but Ethiopia Skate isn’t worried. “If we don’t make that goal, it’s not the end of the world because we can still use that money really well to make some ramps and some rails,” said Stromsoe.

Ethiopia Skate hopes to receive funding from local Ethiopian resources in the future, such as the American and German Embassies, and possibly even the U.N. The ultimate goal is to create an organization that is self-sustaining.

“To be sustainable is very important,” said Stromsoe. “People don’t do that enough in Ethiopia; Africa, in general. They think we can just send all of our used stuff over there to solve the problem. But to help them create that for themselves is the best thing you can do.”

Despite being half the world away, Stromsoe thinks people in SLO County can help. People can donate money, of course, but he also says:

“There is no coincidence … there is always a way someone can help, besides money.” To learn more about Ethiopia Skate, visit its Facebook page: facebook.com/Ethiopiaskate. To donate to the cause, check out their Indiegogo page: indiegogo.com/projects/Ethiopia-skate-campaign. Donations are accepted through Feb. 13.

Three cheers for eating things that are friendly toward our four-legged brethren. Vegan Week SLO kicks off Jan. 11 at Bliss Café, 778 Higuera St. (in the Network mall) from noon to 4 p.m. There will be samplings of vegan cuisine, prizes, and for Fido: samples of “V Dog” vegan dog food! What will they come up with next? To learn more contact info@veganweekslo.com.