Created by Sam Levinson (Assassination Nation, The Wizard of Lies), Euphoria follows the lives of a group of high school students as they deal with friendship, love, identity, drugs, sex, and trauma. It's loosely based on an Israeli TV series of the same name. (10 55-min. episodes)

Glen File this one under the "hard to watch, hard to turn away from" department. If you've seen Kids (1995) or Thirteen (2003), you know how disturbing it is to see children make terrible choices, and that's essentially what Euphoria is all about, starting with Rue Bennett (Zendaya), a troubled young woman grappling with depression and self-medicating with whatever she can get her hands on. When she meets Jules Vaughn (Hunter Schafer), a transgender student new to Rue's school, they find they're kindred spirits and are fast friends. There's also Nate Jacobs (Jacob Elordi), the school quarterback who has a toxic relationship with cheerleader Maddy Perez (Alexa Demie); hanger-on Kat Hernandez (Barbie Ferreira), who finds her power as a cam girl; "easy" girl Cassie Howard (Sydney Sweeney); and a host of others. In an ironic twist, one of the most sympathetic characters is Fezco (Angus Cloud), Rue's drug supplier. One of the series' clear villains is Cal Jacobs (Eric Dane), quarterback Nate's father, who's into sex with underage trans females. I found it really hard to watch at first, but I was soon invested in these kids' lives, desperately wanting them to be OK. It's difficult subject matter, but this series handles it with a lot of nuance. 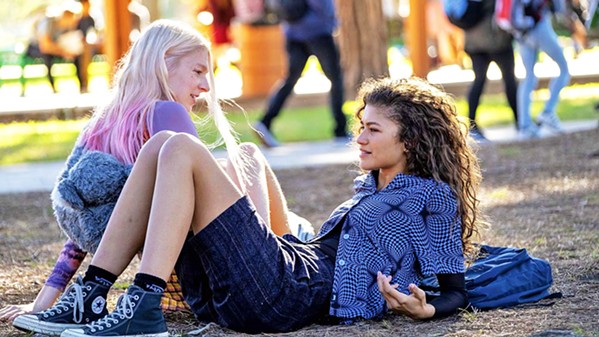 Anna These characters are seriously complicated, and the series aims to show that whatever your life looks like on the outside doesn't reveal what's really going on inside. Nate Jacobs is a really unlikeable guy—he's got the ego of a douchebag quarterback who has had life easily handed to him. You could look at him with his opulent lifestyle, his hot girlfriend, his status with his peers, and think he's got everything he could want and more. How could someone like that be miserable? Nate has been holding on to secrets galore for most of his life, and they've slowly eaten away at him and turned him into this self-loathing jerk who would rather burn down the world than admit his vulnerability. This show embodies that tortured teenage experience so well throughout all of its characters, and reminds those of us well out of our teen years how incredibly hard that time of building your identity can be. Complicated characters along with a visually stunning aesthetic make Euphoria one of a kind. I'm hooked.

Glen Visually stunning indeed! The cinematography is incredible, as is the costuming and makeup, and the acting is sublime, especially Zendaya and Schafer, the latter of whom is making her acting debut in this series. You may have heard of her. Her father is a pastor, and when he moved his family to North Carolina to a new church, Schafer, a trans teenager, protested North Carolina's Public Facilities Privacy & Security Act, which made it illegal for trans people to use a public bathroom that didn't conform to the sex listed on their birth certificate. The law was eventually repealed. She's a powerful performer, and she and Zendaya have compelling chemistry. Zendaya got her start as a child model and backup dancer, eventually landing the role of Rocky Blue on Disney's Shake it Up. She gets a chance to show off her singing talents in the final episode of the season in a fantasy sequence that's really interesting. Euphoria may be hard to watch, but it's worth the discomfort.

Anna Zendaya and Schafer are both heavy-hitters, and there's a whole lot of talent and a whole lot of chemistry between them. I really like how the series is laid out: Individual characters or relationships may get focused on in an episode, but there is also a whole world of things going on around that particular storyline. It's pretty genius television-making, and the over-the-top perfection of the makeup and costuming paired with gritty and difficult storylines is a great juxtaposition. Even the awful, difficult, heartbreaking moments glow with a dark beauty. It's dramatic but doesn't even brush against becoming soap-opera-like. There are secrets and darkness and a bunch of young people experiencing the greatness and the terribleness of life for the first time. I can't wait for more of this, more of Rue and Jules, and more of that magnetic energy they give off. This one is worth every difficult moment. It's fantastic television. Δ