Evani Lupinek's dreamlike vistas hover on the edge of abstraction

To Paso Robles artist Evani Lupinek, home is a relative term. Born in the Netherlands, Lupinek insists she’s “not all that Dutch.” When she was 9, her family moved to Australia, though Lupinek says she doesn’t consider herself A ustralian. In her youth, she led a relatively nomadic life, living in Europe and Canada and eventually the United States, where she married and settled down. Her accent, I noticed when we recently spoke, is subtle yet mystifying. Lupinek enunciates like a Dutch speaker, while her Aussie side makes father rhyme with lather.

Fittingly enough, Lupinek’s current exhibit of nearly abstract oil paintings, hanging through September at Vale Fine Art in downtown Paso, exudes a similarly rootless quality. The show, simply titled “Recent Paintings,” is a collection of tranquil, dreamlike, and exquisitely beautiful vistas. Something about Lupinek’s land- and seascapes seems to evoke the eternal: There are no signs of civilization here, no animals, no temporary structures at all. The only thing that moves across the grass and water is the wind. It’s the earth before it was inhabited. Or after. It’s all the same to the earth.

Details here are obscured—there’s grass, but no finely articulated blades; the transition of sea to sky is an impossibly gradual fade of blue to mother-of-pearl. It seems the exhibit has more to do with the initial sensory experience of a place than any particular place itself.

“If I was from one place only, and that was just who I was, I would probably paint just that,” explained Lupinek, sitting in the empty gallery surrounded by her work. “But because I’m from so many places, it becomes a composite, and a composite needs to stay simple, because otherwise it would be chaos, wouldn’t it?”

Curiously, Lupinek said, some viewers are certain they recognize local sights in her work. (“I’ve been there” is one of the reactions she hears.) Others see them as unfinished, lacking some sign of life—a human, an animal, a farmhouse—that would make the pieces complete. One woman told Lupinek she could “just see” a pelican standing on the abandoned shore of one of her abstracted oceans, a suggestion that seemed to amuse the artist. 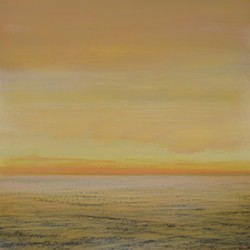 “Why not?” I asked Lupinek, experimentally. (Wouldn’t people just adore the occasional pelican?)

“I think it has to do with maybe the type of work that it then becomes,” she replied, “… It would be so easy to just put a little figure walking along. And you know what? People would love it. Or a little deck chair … You could take each one and add an element like that, and you know what, they would probably sell like hot cakes.”

But this would undermine the intention of the work, which Lupinek describes as “a metaphor for time:”

“If I look at the paintings, I see distance; I see distance and time. Those are the two things I see. In other words, things that are in the past are quite a long ways away, because of the age that I am, and it’s hard to see distance in the future, but hopefully both are there, in the space. They maybe allow past and future to exist on the same canvas. That’s my hope, because, you know, we’re in a finite situation.”

It’s this finite situation, the fleeting situation of living, which “Recent Paintings” evokes. Imagine humanity from the earth’s perspective: The vast majority of people who have been born are dead already, and the miniscule fraction that are currently living will be dead shortly, like grass in the sun. The earth is a reminder of mortality, as a gardener knows; the soil you till will outlive you.

But the garden is nonetheless a peaceful place, despite such implications, and the works in “Recent Paintings” have a tranquil, even meditative quality. Lupinek avoids drawing too much attention to the process of painting, or to the presence of the painter. Brushstrokes are subtle and often traverse the space horizontally, making an uninterrupted line. (“I don’t want the language to overwhelm just the impression,” she explained of this approach.)

The hues of Lupinek’s iridescent skies are often the result of chance: Oils being a messy medium, she explained, the labels on her paint tubes are often obscured. Often, it’s not until the paint has already been applied to the canvas that she discovers what color it is. From there begins a process of reacting spontaneously to the conditions presented, creating new conditions, reacting to those, and so forth—until the work is complete.

Lupinek’s work in general seems to evolve in a similar way, intuitively moving toward the horizon.

“This work, I feel, will carry me into the future,” she said—meaning, in this case, not eternity, but at least the next few years. “It will change, and it will modify … but there are all the elements in it, for me personally, that will probably gratify me for a long time.”