Everybody needs a Friend

A traveling modern dancer performs and teaches in SLO 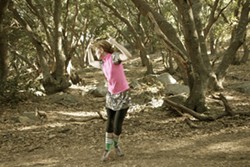 Ashley Friend is back in San Luis Obispo. The modern dancer, a SLO native but New York City resident, spent eight months on the road between May 2008 and January 2009 driving an RV from east to west coasts. A soft-coated wheaten terrier named Isadora was her sole companion. She returned to New York only to begin a two-week drive to SLO at the tail end of July. New York during the summer was no place to raise a puppy, she reasoned. While here, she’s hosting weekly dance workshops at Class Act Dance in Paso Robles and performing her two most recent works at the Spanos Theatre on Sept. 11.

“I didn’t dance. I didn’t rehearse. I just experienced the land,” she said, of her two-week trek. To her, that meant driving through the center of the country and camping outside along the way. She saw Georgia, Utah, Kansas, Missouri, descended into Death Valley when it was 128 degrees outside. She listened to NPR on the radio along the way and—in those dark places where there was no NPR—Christian stations. As a result of these auditory experiences, Friend incorporated speech into the 25-minute piece that she created as a response to her two journeys.

She called the piece “Honey Flat,” after a place she camped in Texas, a space filled with the cries of coyotes. She calls the land ordinary, but was inspired by the strangeness of the name. While there, Friend danced at the edge of the canyon.

In February, Friend performed her first installment of “Honey Flat” in New York. The dancer prefers to perform each new work multiple times, using videotapes and feedback from other choreographers and dancers to allow the piece to evolve. Already, she has performed “Honey Flat” three times. Her intention was to translate her experiences on the road into dance, emphasizing her physical interaction with the land over her encounters with other people. She compares the result to a piece that she performed in SLO in 2006, called “Scary Body.” By strapping prosthetics and other physical impediments to her body, Friend explored how her movement vocabulary changed. In this case, however, it was the land and weather that she was forced to negotiate.

“I do a lot of sort of collapsing and release into the ground and getting back up again. I feel like ‘Honey Flat’ is like that, this idea of giving up to gravity and then getting back up,” Friend explained. “The main thing is just that realization that the movement was so influenced by external forces—the earth, the weather. As dancers we’re so used to having the controlled space of the studio. The temperature is controlled. The floor is perfect and refined. Everything is for you.”

In Joshua Tree, Friend danced in the snow for the first time. And in White Sands, New Mexico, she negotiated the fine particles billowing around her.

“Honey Flat” remains a work in progress; the music has yet to be selected, though she was planning on incorporating Celtic music by David Brewer, a bagpiper she met in Cambria. The intrepid performer also experiments with light, shadow, projection, reflection, and video back in New York. She would like to bring a little of that aesthetic to SLO, and is attempting to rig a reflective floor for her Spanos Theatre performance. She also recently reneged from her original plan to wear ordinary dance attire, and is plotting to create a gothic West-inspired costume, equal parts lace and insanity.

During the Sept. 11 performance, Friend will also debut a new piece called “I Hate John.” (“It was in reference to somebody,” she admits, of the title.) It’s a shorter dance, a mere eight minutes long. In part, she simply wanted to create something that wasn’t 25, 50, 70 minutes long, as all of her pieces since 2006 have been. As with “Honey Flat,” music is still something of a question mark. When she began working on the piece in New York, she had an ’80s music theme, which she recently overhauled. The same situation occurred some time ago with music from the ’70s, leading Friend to conclude that a decade’s music, however entertaining, simply isn’t a substantial enough theme for a piece.

“You have to start somewhere,” admitted Friend. “And then, for me, I go ‘that was fun. But now I want to go deeper.’ I like the honest and authentic. And if I start with a decade that’s a little more on the surface.”

All of this ties in with Friend’s deliberate approach to her choreography workshop. She has a list of activities to get her students thinking, and moving. Sometimes, she’ll give them an improvisational command, such as make circles with your body. Or she’ll draw a path on a piece of paper and ask her dancer to follow that path in the studio. They do writing exercises to determine the purpose behind their work.

“Intent is really important in dance. Otherwise you’re not making a dance. You’re making a routine. You’re making something that’s not so deep and personal. Or even artistic,” she insisted. “I start with a lot of questions. From what is dance, which is simple but complex. To when does a performance really start. Is it when the dancer comes out? Or when the audience comes into the space? Is it when you begin work on the dance? Does the audience just want to see themselves on stage?”

Friend has extended an invitation to her workshop students to join her on stage on Sept. 11 to perform their new choreography. After the show, and a performance of “I Hate John” scheduled for October in New York, Friend hopes to renounce her days as a soloist. Temporarily, at least. Since 2007 she’s made nothing but solos; her last group piece was titled “Sunshine and Dirt.” She drove across the country alone, never seeing the same person twice. But when she returns to her adopted city, teeming with eight and a half million souls, her dancing will gain a new extroverted edge.

Arts Editor Ashley Schwellenbach believes that the earth is flat and the sun a ball of honey. Send science textbooks to aschwellenbach@newtimesslo.com.