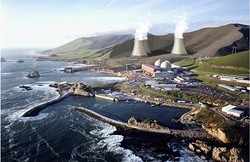 That’s the multi-billion-dollar question surrounding a recently released report by Pacific Gas & Electric’s contractor analyzing means of eliminating the plant’s once-through-cooling system in favor of one that complies with State Water Board regulations.

Simply put, once-through cooling systems take in water from a nearby source—in Diablo’s case, the Pacific Ocean—circulate it through pipes to absorb heat and to cool spent fuel pools and safety components, and then discharge it, now warmed, back out into the source.

In May 2010, California’s State Water Resources Control Board adopted a policy to bring the state’s two nuclear plants—Diablo Canyon and the since-shuttered San Onofre Nuclear Generating Station—into compliance with the federal Clean Water Act by reducing their water intake flow by at least 93 percent.

Diablo Canyon has until December 2024 to comply with the regulations; that’s the same year its current operating license is set to expire.

The plant’s intake structure is 240 feet long, 100 feet wide, and 18 feet high and extends down some 30 feet below sea level. It’s in a cove of sorts, and is backfilled by rock on three sides, with water coming in on its western side. The intake’s four 13,000-horsepower electric motors pump some 1.7 million gallons of seawater per minute, or up to 2.5 billion gallons per day, according to PG&E.

Once-through cooling systems were initially the most popular options for dealing with heat because of their simplicity and low cost, but few new power plants use them because of impacts on local ecosystems and marine life, which typically consist of species at the base of the food chain.

Though a series of walls, racks, and screens keep most debris from entering the intake structures, Diablo Canyon has run into its own problems with the system. In April 2012, PG&E was forced to power down the plant’s Unit Two reactor after southerly winds blew migrating sea salps—very small jellyfish-like critters—into the structure, clogging its screens and affecting water pressure.

In complying with the federal Clean Water Act, many non-nuclear coastal plants that use once-through cooling have chosen to modernize their systems to air-cooling systems. Others have pursued such alternative controls as advanced methods of screening. Diablo Canyon, however, is required to investigate alternatives through a special committee: the Review Committee for Nuclear Fueled Power Plants, comprised of state regulators, utility reps, and advocates.

Compatible closed-cycle cooling systems—of which the report found five—vary in the details, but the wet ones all generally reuse cooled water in different cycles as opposed to immediately discharging it back to the original source. They rely on large cooling towers that expose the water to ambient air; some evaporates, and some is sent back into the plant. The dry systems use air instead of water to cool a turbine and can decrease a plant’s water consumption by more than 90 percent, but require more fuel per unit of electricity produced, leading to more air pollution and other environmental impacts related to producing and transporting the fuel, according to data from the Union of Concerned Scientists.

The draft report notes that this system would require excavating a portion of the mountains immediately north of the Diablo Canyon power block to build new cooling towers—akin to those seen in the opening credits of The Simpsons. The specific technology used would determine how many towers would have be built: If that’s two, PG&E would need approximately 62 acres of leveled ground; for four towers, the utility would need 109 acres, according to the draft report.

Also according to the report, construction costs for the closed-cycle systems would range from $6 to $12 billion, which—though the report doesn’t explicitly say it—would almost certainly come from ratepayers. Construction could take as long as 14 years.

The other proposed alternatives cost less and are expected to take less time to build, but each has its own limitations and drawbacks, ranging from biological to logistical challenges.

The proposed alternatives, of course, would be subject to California Environmental Quality Act review, as well as other lengthy permitting processes. However, Bechtel concluded in its report that the three proposed alternate technologies wouldn’t require a license amendment request from the plant’s federal regulator, the Nuclear Regulatory Commission (NRC).

Not everyone agrees. The Diablo Canyon Independent Safety Committee—another oversight group, established in a settlement between the California Public Utilities Commission, the state Attorney General, and PG&E, specifically tasked with reviewing the safety of everything Diablo does—issued an evaluation of the previous draft of the alternatives report. The three-member body found that not enough information is available to suggest how any of the proposed cooling system alternatives would impact safe operation of the plant.

They further disagreed with the report, arguing—given the extensive retrofitting required—that any of the proposed closed-cooling systems would require PG&E to file a request to amend its operating license with the NRC.

Given that PG&E is seeking a renewal of its operating licenses for another 20 years beyond the current reactors’ license expiration of 2024 and 2025, that may not bode well for license renewal.

The safety committee will again discuss the draft alternatives report at its meeting on Oct. 10 at the Avila Lighthouse Suites at 8 a.m. See that meeting live at dcisc.org/agenda.php.

“Importantly, the content of the draft, and even the final report, is not the end-point regarding the future state of the power plant’s cooling system,” Tom Cuddy, spokesman for PG&E, wrote in an e-mail response to a New Times request for comment on the report. “It is an information resource for further evaluation/consideration that supports agency policy development.”

However, the report has already attracted interest from locals. Fred Collins, tribal administrator for the Northern Chumash Tribal Council, told New Times the area north of the plant is the same site as his direct ancestors’ village. He takes special exception with the report’s claim that “all cooling tower layout location footprints avoid the Indian burial grounds.”

“We’re not real happy about it,” Collins said. “Our determination is that it absolutely does impact a Native American cultural site.”

Others who spoke to New Times—who declined to be named for this article because of their participation in various related committees and panels, and who haven’t yet submitted comments for the official record—pointed to the cost to retrofit the plant, the size of the cooling towers, uncertain environmental impacts on the hills north of the plant, and the visual impacts of towers on the coastline as major concerns.

According to State Water Board Director of Public Affairs George Kostyrko, the board review committee is accepting comments from the public on the draft report until Oct. 17. The review committee members will be supplied with those comments prior to its Nov. 4 meeting in Sacramento and will make recommendations prior to the release of a final alternatives report on Dec. 16.

The draft report can be viewed at swrcb.ca.gov/water_issues/programs/ocean/cwa316/rcnfpp. Comments can be submitted to Shuka.Rastegarpour@waterboards.ca.gov.