Are you macho enough to say you love pink wine? I am. If you’re also answering yes, you won’t want to miss this outstanding new Central Coast wine festival devoted to Paso Robles’ pretty pink wines. The second annual Real Men Drink Pink! is approaching fast, and tickets to this rockin’ hot party won’t last long. Twenty of Paso’s top rosé-producing winemakers are inviting everyone to a beach party in Paso Robles. Yeah, you read that right. It takes place at Star Farms where, apparently, the owners really wanted beach front property in San Miguel. So they built their own half-acre blue lagoon with white sandy shores and palm trees. 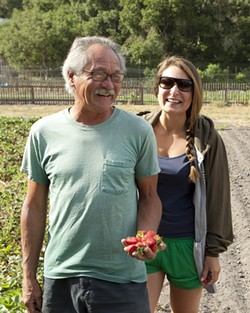 “I went to see the property after someone told me it was a little oasis in the middle of Paso Robles,” said Christian Tietje, winemaker at Cypher Winery and founders of Real Men Drink Pink! “Star Farms is like a slice of the Caribbean in Paso Robles, and we’re going to put on a premier, sophisticated event: We’ll have great foods like charcuterie and lobster, and rosés from winemakers that love doing this.”

The event was created when Tietje and his Paso winemaking brothers and sisters partied together on warm summer nights while sharing their rosés with one another. It occurred to Tietje that the righteous party should be shared with their winery club members who love pink.

“The first party was my play on the ’80s when everything was outrageous and campy,” he said. “It was a big, righteous party where everybody wore pink, some wore pink wigs, some entire pink outfits, and we had pink blow-up furniture. We decided to blow it up [the rosé party], but still keep it cool and funky.”

It was so successful, it led these insightful partiers to create a charitable event that includes everyone who drinks pink. Well, you can enjoy it if you get your tickets early enough. Because once the announcement about the amazing band who will be performing hits social media, you’ll be begging for tickets that have long since sold out.

Get the full story at realmendrinkpink.org or on Facebook under the event name. Star Farms is at 7835 Estrella Road in San Miguel. The grand rosé tasting happens June 23 from 1 until 2:30 p.m., immediately followed by the Pink Party from 2:30 to 5 p.m. featuring a DJ and secret headliner band (whose name will be announced May 28), and you can swim, so wear your pink bathing suit under your clothes. Tickets cost $75 each. During the Pink Party, food trucks serve foods available for purchase, and rosés can be bought by the glass. The cleverly conceived rosé tasting and party benefits “must! charities,” and the Central Coast Cancer Community.

“Winemakers are excessive people. I’m one of them. We’re into food and people and drinking rosé,” said the garrulous Tietje, a Rhone and Spanish wine specialist who makes Cypher Pistil Rosé with a pink snakeskin label. “There has been a burgeoning rosé movement happening over the last five years. The wine community can’t get enough of it and somms [sommeliers] are really into it.”

If you want to be into it, too, reserve your tickets early and get your pink on.

Did you know that strawberries are SLO County’s top crop? I always expect it to be wine grapes, but those came in second place in 2012. Last year, strawberries outsold wine grapes by more than $8 million, according to the SLO County 2012 Crop Statistics Report. That’s gross value and doesn’t include increasing costs of production like transportation and labor. However, total production of winegrapes increased 31 percent compared to 2011, when an April frost severely reduced vineyard crops. Strong prices and high demand for San Luis Obispo County’s wine grapes set a new record in 2012, valued at more than $197 million.

“The total value of strawberries was over $205 million, representing 24 percent of the combined value of the county’s entire agricultural industry,” the Crop Statistics Report noted.

I prefer buying strawberries, among other fruits and vegetables, at local farmers markets because I want food that’s freshly harvested by passionate farmers who don’t spray. My go-to farmer is Ralph Johnson, who employs organic methods and hand-tends those sweet little berries with only one assistant. Johnson isn’t certified organic, but he’s passionate about producing fruit and vegetables that are close to being labeled organic.

“The main pitfall of being certified organic is not having a compost pile, but my farm isn’t big enough for one,” Johnson admitted. “I don’t spray sulphur or any other sprays, so I have to throw away a high percentage of berries.”

Johnson told me most produce damage comes from birds and bugs. So if you buy fruit or produce and it doesn’t have bugs or little bites, it’s likely they aren’t farming organically.

“A lot of guys use organic oils, but it’s still spraying. I use a lot of chicken manure compost,” he said.

I had to look it up, as I’ve never lived or worked on a farm. Chicken manure can’t be used raw, it stinks, and the ammonia isn’t healthy for chickens or people. Once the manure is composted, it’s converted to “black gold.” Then it’s a good soil amendment for adding organic matter and increases water holding capacity. Chicken manure adds more nitrogen, phosphorus, and potassium to your plants than horse or cow manure can, according to WSU Cooperative Extension’s educational website Seattletilth.org/learn. Johnson grows Albions (their high sugar content and firmness make them popular among commercial growers), plus Seascape and the old-fashioned Sequoias. You’ll find him at SLO County farmers markets every day except Tuesdays. ∆