The SLAM showcases a cross-section of contemporary sculpture 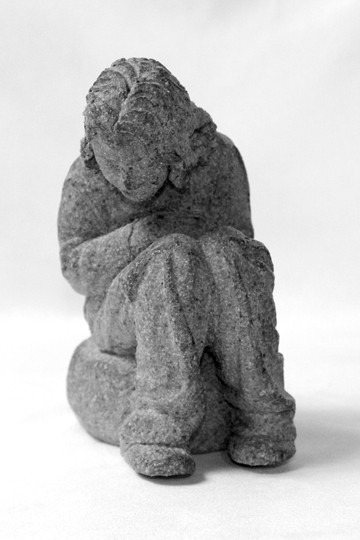 Three hundred and three pieces were submitted to the 2nd biennial “California Sculpture SLAM,” an exhibit of fine sculpture by California artists. Thirty-eight made it in, and are currently on view at the San Luis Obispo Museum of Art. The SLAM, it would seem, requires a great deal of painful cutting away to reveal its true form—much like the medium it represents. Unless you’re working in paper, like Goran Konjevod. Or twigs, like Tamara Mason. Or blown glass, like George Jercich. Or zip ties, like Chris Beards. Then I don’t have a metaphor for you. Sorry!

The truth is that contemporary sculpture is incredibly varied, making jurying difficult, and easy comparison between works impossible. I do not envy this year’s juror, Los Angeles-based sculptor Coleen Sterritt, in the slightest. I have no idea, for instance, how one judges the deliberate rudimentariness of Jonna Ramey’s Crude (a lumpy crow rendered in encaustic wax and sandstone) or the sheer audacity of Mason’s Unction (essentially a dead plant on the wall) against the imagination and technical skill on display in Earth Mother in Flight, a bronze work by Donald Ajello. With no prescribed theme or other guidelines, each piece in the SLAM appears to have fulfilled a very different goal. Some works are conceptual. Others respond to natural forms. Some have a message, while others are simply playful, innovative, and intriguing to the eye.

The exhibit shows a great deal of care in the way works are presented and allowed to interact within the space. Larger, freestanding pieces such as Jercich’s Abatoir and Adon Valenziano’s Loxodonta daliensis—a fantastically surreal piece seeming to combine a mammoth and a praying mantis; humorous, prehistoric, strange—dominate the floor space in one half of the room, and are among the first to catch the eye. Wall sculptures are largely kept to this side, among them Settino Scott’s Mortality, a shark head with its mouth open wide, revealing layer within layer of teeth—some of them human. It’s both nightmarish and totally ridiculous; laughable in its extreme ferocity, like something out of a pulp horror film.

The other side of the room has been bisected with a divider. On one side, several smaller objects can be seen on pedestals. Of particular poignancy are L.A. artist Christopher Chinn’s maquettes of homeless people, part of a bigger project for which the artist placed site-specific, life-sized ceramic statues of the homeless throughout Skid Row. Even in miniature, Chinn’s pieces confront our conscience by commemorating a class of people we try to forget exist; a class many people would sooner let suffer and die than touch. Chinn shows the humanity of the forgotten—ironically, by rendering them as objects.

On the other side of the divider, the first side you see upon entering the space, a few mid-sized works hold their own. Architect Marvin Armstrong’s abstract wood sculpture Temple is a lovely example of an artist’s reaction to natural forms, in this case a manzanita shrub. The work’s amiable, almost bulbous curves create a crouching, elegant shape that’s different from every angle—although, thanks to some relatively tight quarters, it’s not always possible to walk all the way around such pieces.

Jenne Giles’ fiber work Dead Hare is immediately compelling; a piece that could almost be a stuffed animal, if it didn’t appear to be frozen by rigor mortis. How to explain pictures to it?Autumn Jennings has created a twisty, angular column of rusty screws and nails that shines like more precious metal in the right light. Goran Conjevod’s wonderful work Companions is architectural and somehow creature-like; two folded paper constructions complementing one another. It’s a piece that manages to appear significantly heavier than it is (in publicity photos, it resembles metal) and its delicate nature reveals itself only when seen up close.

Juror Sterritt presented awards at the show’s opening reception, while admitting that determining a winner among such a strong yet varied group is something of a fool’s errand. Ajello’s aforementioned Earth Mother in Flight took third. Kathy Allen’s wall sculpture Bed Wax—wax pushed oozily through bedsprings; evocative, brave, gross, awesome—took second. Luis Moreno’s The Raw and the Chewable placed first, a freestanding mixed-media piece of what looks like wood and paper being consumed by an organic, viscous substance.

With no thematic guidelines other than those in implied in its title, the California Sculpture SLAM is about as varied as it gets, showing us how San Luis Obispo County fits into the cross-section of contemporary West Coast sculpture. The SLAM is a showcase of the artist’s struggle—as well as the juror’s.