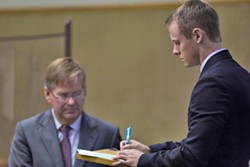 McMillan—who was arrested by San Luis Obispo police on Sept. 4, 2014, and subsequently charged with two felony counts of drug possession for purpose of sale—pleaded no contest to felony marijuana possession and had his other charge dropped as a condition  of the plea.

A plea of no contest results in a conviction but isn’t an admission of guilt.

In a Feb. 6 press release, Assistant District Attorney Lee Cunningham said McMillan’s sentencing is set for April 17, adding “he will be sentenced to no more than one year in county jail as one of the terms of his probation grant.”

The Delta Sigma Phi fraternity house where McMillan was arrested was also the site of an alleged armed robbery last year. The legal case against five Cal Poly students accused of perpetrating that robbery is still proceeding independent of McMillan’s case.

McMillan’s attorney—Robert McMahon—deferred comment on the plea agreement when contacted by New Times, but added that “there’s a lot of positive things to be said about my client.” McMahon did not respond to a follow-up request for comment.

In a separate part of the case, Santa Barbara-based attorney Neil Levinson argued on Feb. 6 that the Delta Sigma Phi Alumni Corporation Board (owner of the fraternity house) is the rightful owner of $2,700 out of the roughly $4,700 in cash seized during McMillan’s arrest last year.

“Cash seized by the police was rent money paid by fraternity members to the defendant, who was authorized by [the house owner] to collect rent payments from those fraternity members … and not used for the sale of drugs or any other illegal purpose,” Levinson wrote in his motion, requesting the return of $2,700 in cash.

Deputy District Attorney Kathleen Secrest opposed Levinson’s motion, writing that text messages seized from McMillan’s phone “clearly show the defendant to have been dealing marijuana and RX drugs to a larger number of individuals both inside and outside his own fraternity.

“It is impossible to separate out possible rent/security deposits from drug monies collected by the defendant as a result of his rather sophisticated drug sales endeavor,” she wrote.

Judge Michael Duffy is set to rule on Levinson’s motion on April 17.