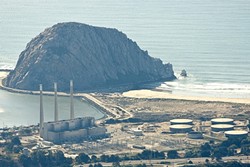 On Nov. 17, Dynegy shareholders will vote on whether to sell the company, along with four of its power plants, to The Blackstone Group for $4.50 per share. The whole kaboodle would then be turned over to NRG Energy for a cool $1.4 billion. Dynegy management really wants the deal to go through, having issued two letters to wary shareholders in October urging them to approve the sale or face likely financial fallout.

Included in the deal, should it go through, is the sale of one power plant in Maine and three California natural-gas facilities: Moss Landing, Oakland, and Morro Bay. Blackstone would pick up $4 billion of Dynegy’s debt.

On May 4, the California State Water Resources Control Board approved a policy that effectively banned once-through cooling systems, those that suck ocean water to cool various machinery and wreak havoc on aquatic ecosystems. One month before that regulation became official, Dynegy had its first meeting with NRG to discuss a sale, according to the Wall Street Journal.

Dynegy has until Dec. 31 2015 to comply with the regulations, which would require a veritable facelift, nose job, and BOTOX to wean the Morro Bay plant off its dated cooling system. State Sen. Sam Blakeslee told New Times such a retrofit would probably cost between $700 million and $1 billion, and would require a new power-purchase agreement to keep the plant online long enough to justify the expenditure. Additionally, Dynegy needs a lender willing to dump money into the retrofit, a show of community support, and all the proper permits.

“All this uncertainty is deadly to capital purchase projects,” Blakeslee said.

Though Dynegy representatives are reluctant to say outright that the Morro Bay plant appears to be economically kaput, they have acknowledged in a roundabout way that it’s not worth keeping.

“We have stated that Dynegy does not have plans for a cooling tower investment at Morro Bay,” said company spokesman David Byford.

According to Dow Jones Newswires, the regulations would force Dynegy to shut down its South Bay power plant near San Diego, as well as one unit of Moss Landing.

Morro Bay has been a quick, but dwindling investment for Dynegy. They purchased the plant from Duke Energy in April of 2007 back when Dynegy’s stock was on the uptick—hitting a five-year high of $52.50 per share in July of that year. About a year later, the stock began to plummet.

As of press time, Dynegy’s 120.6 million shares of stock were hovering closer to $4.75 per share. The stock is down 47 percent this year, according to Dow Jones Newswires. NRG, on the other hand, was carrying 253.18 million shares worth about $20 a pop, as of press time.

A Zachs Investment Research report warned investors to hold back from Dynegy until the sale to Blackstone and NRG is finalized. The firm gave Dynegy’s stock a neutral recommendation. The same report called the Blackstone deal a “win-win for both the parties,” stating that Dynegy’s shareholders were facing a grim future on their investment, and Blackstone “is eyeing Dynegy’s generation assets.”

In two the-sky-is-falling letters, Dynegy urged its stockholders to approve the sale.

“Your Board of Directors believes this transaction is in the best interest of Dynegy’s stockholders because it provides immediate, certain, and fair value for your shares while reducing the considerable downside risk facing Dynegy if the Blackstone transaction is not approved and completed,” the company wrote on Oct. 19.

Some stockholders have publicly opposed the deal, saying that the company would be more profitable as a stand-alone entity.

So what does that mean for Morro Bay? Could NRG be the savior with a wallet fat enough to keep Morro Bay online?

“I don’t know,” County Supervisor Bruce Gibson said. “The company’s not been real forthcoming with their plans—the energy business is a whole world unto itself.”

Morro Bay Mayor Janice Peters said she had “no idea what their plans are.”

“It’s a peaker plant though,” Peters said. “So whether they would not want to put in that new generating system, I don’t know, because it may not be financially worth it for them.”

Morro Bay operates only during peak demand periods. The city used to draw revenues as high as $3.5 million from its lease with the plant, but that money has since shrunk by almost 80 percent.

In fact, ecobaun, an alternative-energy construction company, was devising a plan with Dynegy to repurpose the property toward alternative energy projects with an on-site campus and a goal of repurposing the site from a 55-year-old pollution belcher into a testament to 21st century energy ideas. Tom Fee, the company’s founder, said the plans for such a transformation could come to fruition in three to four years, which would provide a transition rather than complete plant shutdown.

“There’s the possibility that if you kill the giant, you have a giant rotting corpse,” he said.

But the potential sale to Blackstone and NRG may have screwed that deal. Either way, Fee still doesn’t know how the plan would fare with new owners.

“Ecobaun is hoping that the new owner, NRG, will accept this same-use plan and will make a decision to proceed based on our proposal,” Fee said.

Even retired economic attorney Ronald Barusch, who wrote the Wall Street Journal piece on the Dynegy-Blackstone deal, said he wouldn’t be much help answering why someone would purchase the Morro Bay plant.

So what do the companies involved have planned?

“You have to realize the plant’s being sold, or there are discussions on the sale, and we can’t speculate what the new owner would or wouldn’t do,” Byford said.

“Unfortunately we can’t comment on any of that because the acquisition has not closed yet,” Blackstone spokeswoman Heather Lucania said.

Maybe by Nov. 17 we’ll have some idea what the future holds for Morro Bay’s smokestacks.