The work of San Luis Obispo artist Lena Rushing is instantly recognizable. A mix of figurative expressionism and surrealism with some mixed-media touches, Rushing’s pieces often feature subjects in bizarre or incongruous situations. It’s no surprise that women with exotic animals—an anteater delicately curled around a girl’s slender wrist; a warthog doubling as a footstool—are a primary motif in Rushing’s solo show “Strong Women in Strange Company,” currently hanging at Paso Robles’ Studios on the Park. 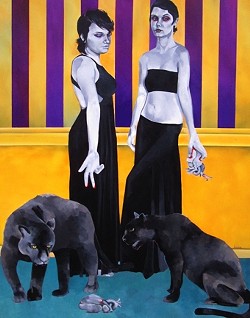 Rushing, a resident of the Central Coast for more than 15 years, has shown her work in just about every coffee shop, lobby, and group show in the area. Perhaps as a result of showing in everyday spaces, Rushing seems to have developed a way of being provocative, honest, weird, and often quite dark while maintaining a certain level of charm and easy likeability. The animals that appear so often on Rushing’s canvas may have something to do with this; after all, animals can be sympathetic, poignant, and deadly creatures—sometimes all at once.

Place a few mysterious and beautiful women into this menagerie, and the works take on new meaning. A panda bear snuggles in a woman’s lap, the dark, sickly bags under her eyes echoing the bear’s own distinctive markings. Vultures encircle a woman dressed in a red Victorian gown, and she gazes down at them with what looks like solemn acceptance. Some of the birds claw at her dress, but others don’t interact with her at all, and appear, thanks to their improbable, collage-like placement, to exist on an altogether separate plane.

The animal kingdom contains a wealth of iconography—there’s an animal to symbolize pretty much anything you like. Some are quite obvious: owls for wisdom, vultures for impending doom. Others, like the walrus and the squid, are harder to decipher. In one piece, a woman sitting nonchalantly on the floor is confronted by an alligator wearing a birthday hat. She appears nonplussed as the creature opens its jaws in a way that could be curious or, just as easily, menacing. In another work, two women with red-lined eyes throw eviscerated, bloodless hearts to black panthers. 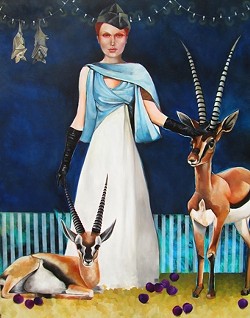 A woman draped in robes stands beside two gazelles—one of whom rests at her feet—and gazes icily at the viewer. Many of Rushing’s pieces feel like portraiture: Aware of being watched, their subjects either stare ruthlessly back or strike vaguely self-conscious poses.

Rushing often employs patterns and designs in her work, giving the pieces—even those set in the outdoors—a sort of decorated, indoor feeling. Her work Under the Bridge is one example: Patterns and textures are placed next to one another all too cleanly to be realistic. The glimpse Rushing gives us of the outside world could just as easily be painted onto the wall that traps the subject inside, giving the scene a close, tunneled effect. (That’s not to overlook the subject herself: a woman under a bridge, wading through water in a red gown with two owls on tethers. The train of her dress appears to turn into blood, as a shark fin makes its way toward her.)

The works’ “indoor” effect is furthered by the artist’s penchant for flatly colored backgrounds, which often gives her subjects a heightened feeling of intensity, as if the beholder and the subjects pictured were in a very small room together.

If used too frequently, viewers may tire of the whole mysterious-woman-with-downcast-eyes motif that is a hallmark of the exhibit. But for now, it works. Rushing’s women, surrounded in subtext that is both domestic and exotic, tell enticing half-stories, stopping us in our tracks, forcing us examine each situation with new eyes.

Arts Editor Anna Weltner has a capybara on her shoulder. Contact her at aweltner@newtimesslo.com.