Looking for something unusual and quirky with which to fill your home? Left Field, a new home goods store in San Luis Obispo, has the answer. Airy and filled with natural light, the space is jam-packed with a hodgepodge of hanging greenery and a kaleidoscopic array of rugs, pots, and other novelty curio items. The effect is cozy and welcoming, cultivated by the affable owner, Nick Wilkinson.

This is Wilkinson’s second store; he also owns Grow, a Cambria nursery specializing in unusual succulents and pottery. He first got started with succulents while he was attending San Diego State University, an area he calls a “primo” growing zone for such plants. He ended up collecting more than 200 succulents, along with some vintage pots before he found an old nursery for sale while visiting his parents on the Central Coast. But Wilkinson said it was always his plan to make his way down to San Luis Obispo, where many of his artist friends are based. With the help of his associate and friend Leslie Clarke Gray, they were able to officially open Left Field in February, offering locals an unusual olio of objects and knick-knacks. 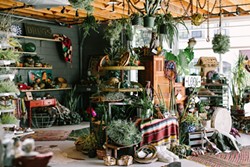 “I usually deal more with the succulents and plants and the handmade pots—that’s more what I have going on at Grow,” Wilkinson said. “But by bringing Leslie’s aesthetic into the mix, we’ve been able to include some quirky interior art pieces. It’s like home goods with a twist. This is not your grandmother’s home goods store.”

Wilkinson said they decided to name their store Left Field because of their goal to bring in the unexpected and unusual. And their collection is definitely that: The art pieces range from standard decorative plates, masks, and Persian rugs, to sculptures of feet and a large multi-colored soccer ball, plus a few signs emblazoned with the word “DRUGS.”

“After 10 years of doing this, you kind of get the hang of it, and you round up a few sources where you can get most of your stuff,” Wilkinson said. “Plus, once you actually start doing it, things just start coming your way. I feel very fortunate that I’m able to have a business that’s predicated on us buying stuff that we like.”

Additionally, Left Field has a small gallery space in the back, which Wilkinson hopes to use for small, personal art shows in the future.

“My background is in painting,” he said. “But rather than do a gallery that’s all about me, I wanted to focus on bringing in artists outside the community. San Luis Obispo definitely has a lot of representational art, which is great, but what I really connect to and what really inspires me is more abstract styles of art that’s a little different.”

Cal Poly received a national award in February for its efforts to increase the number of high school teachers. Cal Poly saw five physics teachers graduate—the most at once in the school’s history—during the 2013-2014 school year. The Physics Teacher Educational Coalition’s (PhysTEC) 5+ Club presented the award at its 2015 conference in Seattle, along with 11 other institutions—such as Brigham Young, the University of Minnesota, and Rutgers University—that had at least five physics teacher graduates last year. PhysTEC is a joint project of the American Physical Society and the American Association of Physics Teachers, and is dedicated to improving and promoting physics teachers’ education. Cal Poly has been involved with the program for the more than 10 years.