Wandering is the winemaker way

I was quite impressed while tasting through two Center of Effort (COE) and Effort 2009 Pinot Noirs with winemaker Nathan Carlson. The quality of both wines was hardly surprising; they showcase the quality of the Edna Valley wine growing region. Carlson, who’s passionate about winemaking, makes COE wines where they’re grown at the estate vineyard in Edna Valley. Devoted exclusively to Chardonnay and Pinot Noir, these Burgundian varieties make up their flagship wines labeled COE and Effort, the latter their second label, exclusively Chardonnay and Pinot Noir. Both are excellent choices in these quality-driven wines, but their value-priced Effort wines are priced about a third less than the price of the flagship COE brand. 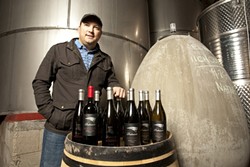 The tasting took place at the winery (originally Lawrence Winery) after Carlson contacted me about another project he was excited about: making wines for the New England Patriots for their own brand, labeled “Patriots.” They’ll have more bragging rights should they win the Super Bowl this year for their fourth title. I wish I could tell you where to get the wines locally, but you’ll have to wait until the Pats start this year’s season at Gillette Stadium to find them. The good news: You can taste COE’s excellent wines right here in SLO County. Although they’re made at the old Corbett Canyon winery in Edna Valley, it no longer has a tasting room open to the public. But you’ll find at least one of these delicious wines at many of our local wine shops, including 15 Degrees C, Gather, Meze, Stax, Tastes of the Valleys, and Vintage 1255.

COE is owned by the Swanson and Rossi families. Carlson explained that Bill Swanson is a close friend of Robert Craft, who owns the Patriots. When Craft tried the new COE line of wines, he ordered 20 cases for the owner’s box at Gillette Stadium. As soon as David Wheeler, vice president of food and beverage, tasted the wines, he suggested buying wine from COE labeled for the Patriots. Carlson made them during the 2009 vintage, which resulted in 50 cases of Pinot Noir and 100 cases of Chardonnay grown in COE’s vineyard.

“The blend is similar, but not the same as I made for COE,” Carlson said.

He told me about sending the wine samples to New Hampshire, which is legal, because shipping wine to Massachusetts is illegal. That way, they could taste the wines and let Carlson know of any changes they wanted in the wines’ flavor profiles.

“They wanted a reserve line with silk-screened labels, which is only sold within the club level at Gillette Stadium,” he said. “They also wanted a house wine line-up of Chardonnay, Pinot Noir, and Cabernet Sauvignon. Ancient Peaks helped us out by providing the Cabernet from its vineyard.”

The reserve label, designed by the team’s house graphic design department, is pretty cool; it features the three Super Bowl trophies the Patriots earned in past years.

Carlson’s interest in wine began when he was working as a bartender at Citronelle restaurant in L.A. He started working for Richard Sanford in the Sta. Rita Hills, and then at Laetitia. His switch to production began at Claiborne and Churchill. At the latter, he poured wine for visitors and helped owner and winemaker Clay Thompson with winemaking at every opportunity.

“Clay finally said, ‘I guess I’d better hire you,’” Carlson said, chuckling at the memory. He stayed there seven years before leaving for an opportunity to work a harvest in Oregon at Lange Winery in the Willamette Valley. Upon returning to Edna Valley, he was hired to work with winemaker Larry Brooks at Tolosa, where Carlson worked for four years. He landed the winemaker’s job at EOS when it was sold by founder Frank Arciero, but didn’t stay long. That was fortuitous; he found a much better job with COE. He added: “I plan to stay here long term.”

The wine business has a lot in common with the restaurant industry. Like aspiring chefs, winemakers move around to experience harvest in different regions, as well as making different varieties of wines. Such experiences build their skills. It’s said that any winemaker can make wine in a good year, but only good winemakers can make a good wine in a bad vintage. I’ve admired Carlson for his dedication to winemaking since I first met him at Claiborne and Churchill. He has a long and solid history in the Edna Valley wine region.

When Swanson and Rossi decided to create the brand, they sought the help of some the best people in the business, including Mike Sinor, who makes his own brand, Sinor LaVallee and Ancient Peaks. Because Sinor was already so busy, they hired Carlson in spring of 2010. They also hired the highly respected Talley Farming to revive the neglected vineyard that was originally planted in 1997 when the winery was still Corbett Canyon. This historic winery estate, established in 1987, has undergone many changes over the years. But it was never as serious as it is today. The COE team is committed to making it a destination for profound Chardonnays and Pinot Noirs.

The 65-acre estate vineyard is dedicated to 22 acres of Pinot Noir with clones Dijon 115, Wadenswil 2A, and Mariafeld 23, and 43 acres of Chardonnay, all clone 5.

“We had work to do to find the best parts of the blocks, really breaking down each row of vines,” Carlson explained of the sustainably farmed vineyard.

“It’s been fun [working on the Patriot’s wines]; it was a sideline, like our partnership with the SLO Historical Society for their fundraiser,” he concluded—but they’re serious when it comes to the vineyard and the resulting wines. “We’re bringing the estate up to the quality we want, but doing it slowly, methodically. We’re planting more Pinot Noir in small blocks on the more interesting parts of the property. We decided to make wines the property wants to make. Not everyone does that.”