The Central Coast is simply swimming in wine. You can’t pop a cork in this county without hitting someone on his or her way to a tasting in Paso Robles, a beautiful wine bar in downtown San Luis Obispo, or a student studying viticulture at Cal Poly. But the owner of Proof Wine Collective, Josh McFadden, said in a recent interview that wine still has much more to offer. It isn’t just something to be consumed, he said. It’s something to be experienced. It provides the essence of culture that every single person should attempt to embrace and understand. 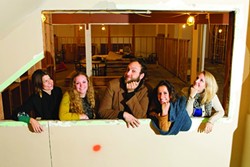 Four years ago, McFadden built Proof Wine Collective from nothing. He has a mission to help others flourish in the industry. He became a self-proclaimed wine connoisseur and uses his knowledge and creativity to help other wineries, vineyards, and wine businesses to embrace who they are and create projects that can inspire pride.

“My goal is to show the best part, the true part of them. ‘This is what I am, maybe I don’t feel like it today, but tomorrow, and in a year, five years, I’ll become this thing.’ It’s giving them a really beautiful shell for them to grow into,” McFadden said.

With years of marketing and branding experience under his belt, McFadden and his company are taking a step to open something that can’t quite fit under one title, but can be held in a 4,500-square-foot space. It’s a wine bar, a restaurant, a store, a place to learn about wine, a friendship-making venue, a consumption zone of delicious wine, a designated area for someone to embrace his or her inner weirdness. Whatever way it spins, the space McFadden is creating is going to be something more than a traditional marketplace, but it’s his goal for his customers to leave feeling better than when they entered. He calls it Turncoat Wine Co., and when imagining the project, he asked himself at every turn, “Does the space allow for someone to live life there?”

“I want to inspire you. I want you to say, ‘This is incredible,’ and ‘I want to come back again,’ and ‘This was a very special time that I had,’” McFadden said.

Proof Wine Collective created a campaign on kickstarter.com, a website that helps upcoming businesses raise money, with a goal of getting $25,000 in donations. On their Kickstarter profile, they’re also selling some interesting prints to raise funds. One poster they created reveals presidents of the United States with a list of their drugs of choice. McFadden found this portrayal appropriate because of his belief that none of the presidents would be who he was if he hadn’t experimented with such drugs, including alcohol.

“I want to show people that alcohol is not something evil. It is something that is un-decidable. It is not good or bad. It’s a drug; it’s a cure and a poison. Everything you think about alcohol, whether it is good or bad, that is all about you,” McFadden said.

McFadden is an expert in the wine industry and views it as more than just selling a glass of wine. His goal is to take all of his abstract, interesting views and share them through the creation of Turncoat Wine Co. The experience is intended to be indescribable, and potentially life-altering.

“If this doesn’t hit the mark of beautiful, amazing, and awesome, we failed,” McFadden said.

Turncoat Wine Co. will be on Higuera Street, and McFadden hopes it will open in the next couple of months. Proof Wine Collective is located on Marsh Street. More information about both businesses can be found at proofwinecollective.com.

Although he’s 25 years old now, SLO native Dustin Lucas has been battling cystic fibrosis since he was a child, and the nonprofit Children’s Organ Transplant Association is helping his family raise money for expenses related to a double lung transplant he received on Nov. 17. His medical insurance covered the surgery, but Lucas must stay near the Stanford hospital in Palo Alto for six months while he recovers. Donations can be made at cota.donorpages.com/PatientOnlineDonation/COTAforDustinL/.