The Exploration Discovery Center, located at 867 Ramona Ave. in Grover Beach, is open seven days a week from 10 a.m. to 5 p.m.

Between an aquaponic garden, a 25-foot-tall ancient Egyptian pyramid replica, and an inventors' lab with enough tactile treasures to fill a whole day of play, the Exploration Discovery Center in Grover Beach is more than your typical children's museum.

While the center has many of the tried and true, Exploratorium-esque exhibits (a coin funnel to learn about gravity, a plasma globe with colorful electricity bolting around), it also features stations that most kids—and even adults—haven't explored before. 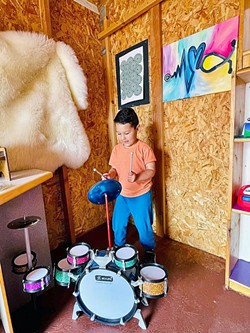 Debra Ugalde was a bilingual educator for 25 years in Santa Maria and is a founding board member of the center, which opened in its current form just a few months ago. As we walked through the museum's outdoor space, she explained that the aquaponic garden is self-sustaining. Koi fish swimming around in one bucket fertilize the plants, and vice versa. The only upkeep the garden requires is adding water when it evaporates. Children can see plants growing, and watch them progress when they come back.

"Everything you see is hands-on," Ugalde said. "They're not doing anything on the computer. Most people spend two hours when they come."

The garden is just one of more than a dozen interactive exhibits and stations that kids can roam through at the Exploration Discovery Center.

Once home to the Grover Beach Volunteer Fire Department, the center's three garage doors (built originally to accommodate fire engines) are now painted bright purple, blue, and green. In 1999, former firefighter Clifford Clark leased the building, and after a decade of remodels, he opened the building as the Exploration Station, with a sprinkling of indoor exhibits aimed at 10- and 11-year-olds.

Years later, Ugalde was looking for a space to bring her dream of a local cultural center for kids to life. She merged with the existing Exploration Station, and Exploration Discovery Center was born. It opened to the public earlier this year.

The new museum features exhibits from the past but takes things up a notch by providing outdoor spaces for visitors too, and extending the age range that can enjoy the space.

In the front, younger kids ages 2 to 4 can play with a water feature and then head inside to the pretend veterinary station and the mock kitchen, or get creative in the craft room.

In the back outdoor space, there are koi fish, ducks, and turtles for kids to gawk at. Youth ages 9 to 12 are encouraged to check out the aquaponic gardening area.

But the main attraction in the back area is the Egyptian-style pyramid. This is where the cultural education aspect comes to life for Ugalde, who said she was inspired by students she worked with in Santa Maria.

"My kids in Santa Maria hadn't even been to the ocean, and when you take them on field trips, that's amazing to them," Ugalde said.

Asking children to learn about even farther away places like Egypt, she continued, is a challenge without the right tools.

"If you can [make] it tactile, showing them a movie, touching, feeling, then you're opening their horizons," Ugalde said. "I think in this world one of the things we need most is to appreciate other cultures."

This inspired the center's pyramid, where kids can go inside and learn about the ancient Egyptians. Next up, the Egyptian pyramid will turn into an Aztec-style one.

"It's all accessible," she said. "We had some speech therapists come in [with] children, who asked if they could recommend this place, because they had never seen the children they were observing talk so much in their life before. ... We're here for the kids."

For admission and pricing, visit the Exploration Discovery Center's website at gbdiscoverycenter.org.

• 3C-REN (The Tri-County Regional Energy Network) is launching a new Multifamily Home Energy Savings program to save property owners and managers money by connecting them with rebates for multifamily properties. 3C-REN is a partnership between San Luis Obispo, Santa Barbara, and Ventura counties that offers energy-saving programs and industry training to the community. Find more information about the program on 3C-REN's website, 3c-ren.org. Δ