Exploratory theater: Cuesta's Drama Program pushes students to become a part of the plays they collaborate to create and perform

Black walls and echoed steps are all that's left of the Ghost Ship.

The mast no longer swings toward audience members sitting a little too close for comfort. The sounds of swashbuckling, a raging sea, ghosts, and murder are gone. Flashing lights and wafting smoke disappeared along with the piles and planks of a rickety old dock.

The 100-seat experimental theater at Cuesta College's Harold J. Miossi Cultural and Performing Arts Center (CPAC) feels hollow. Empty except for the voices bouncing off of the cement floor.

At the beginning of February, this space was unrecognizable—neither in dimensions nor place

Instead, it was a replica of Los Angeles Theatre Center's Theatre 4, which is roughly two-thirds the size of the CPAC's experimental theater. Richard Jackson, who teaches stagecraft and technical theater at Cuesta College, and his students erected new (temporary) walls, crafted a smaller lighting grid above that, and boxed out all of the exits in order to perfectly match Theatre 4's smaller, imperfect shape.

Then Jackson and his students got to work rebuilding the stage and set of Ghost Ship to fit the newly created space. Cuesta College's Drama Program debuted the original production, a play that Cal Poly theatre professor Philip Valle wrote specifically for Cuesta, in the experimental theater in fall 2018. The show, which ran from November to December 2018, was picked to compete in the Region 8 Kennedy Center American College Theater Festival (KCACTF) at the Los Angeles Theatre Center from Feb. 12 through 17. The region covers hundreds of colleges in Nevada, Arizona, California, Hawaii, and Guam—only a handful are picked to compete in the festival.

So the cast and crew remounted the production between Jan. 24 and Feb. 9 in preparation.

But before the ensemble did that, Jackson headed down to Los Angeles to check out Theatre 4, carefully measuring every nook and cranny.

"The whole show had to be compressed, so that it would be to scale," Jackson said. "So by building that space here, it allowed them to learn that space here. ... So when we got there, it was like walking into our own theater. It was creepy."

He gave two reasons for the painstakingly detailed process: Ghost Ship was an immersive experience. The lights, the sounds, the way the actors move, where the audience sits—all of it matters to the outcome of the show. Plus, the set was active and the audience was close, so they had to be sure not to hit anyone when something like the mast of the ship swung around the theater. Jackson also said that he learned a lesson from 2014, when the drama program first took a theater production—another collaborative original, pool '63—on the road to compete in the regional festival.

"We got there and it was nothing like I thought it would be. ... We pulled it off, but it was a very humbling experience," Jackson said. "Since pool '63, everything I design now, I design it with the idea that it's going somewhere."

Cuesta has competed at the KCACTF since 2013. In 2014, pool '63 won five national KCACTF awards and was picked to represent the U.S. in the 2015 International University Theatre Festival in Mexico City. In 2016, another original, Refried Elvis, won six national KCACTF awards, and last spring, Cuesta's production of Man of La Mancha received 14 national awards.

While the Ghost Ship ensemble is still waiting to hear the results of this year's Region 8 KCACTF competition, preliminary comments from some of the festival's adjudicators reveal a lot about what Cuesta's Drama Program is all about. Buzz Herman, national chair of the KCACTF National Playwriting Program, told the ensemble that their show blew him away. Herman spoke to them after one of the nine shows the cast and crew put on during the festival, congratulating them for creating more than just a play. A Cuesta student recorded the interaction and posted it to YouTube.

It was an event, Herman said, and you could feel that energy in the crowd after it was over.

"From the lighting to the sound to the makeup ... all of that created this mise en scène that said everybody was on the same page, everybody was communicating together," he told them. "You created such a visceral world, I smelled it, I tasted it, I felt the texture, I felt the sweat, I felt the muscles of the actors, I felt the hand on my leg."

"That's exactly how we wanted them to feel," said Elzalde, who played Judge Hatch in Ghost Ship. "I think about it now, and I still can't believe it."

Elzalde is a second year student at Cuesta who's planning on sticking around another year. Although her general education requirements are pretty much fulfilled, she wants to take all of the theater classes she can before she leaves: Jackson's technical theater classes and more of Drama Program Artistic Director bree valle's acting methods classes.

"It's one of the best trainings I've ever received. I've been doing theater since I was 10, and honestly, I've learned so much," Elzalde said. "What's crazy is it's just two people running the whole department."

The play started with an idea—a true tale. A ship discovered adrift, abandoned in the Atlantic Ocean near the Azores Islands in 1872. Her lifeboat was missing but her sails were full. She was a bit out of sorts. What happened to the Mary Celeste?

There were two rules, valle said. The run time would be limited to 30 minutes, and that half hour would be packed with tropes of the horror genre typically reserved for film.

"That means we experimented with blood and gore and feats of magic," valle said.

A draft of the script was ready by August 2018, valle said. And during auditions, she and her husband, Philip, gave the actors pieces of that draft. After the show was cast, each individual role was written with those specific actors in mind, she said.

"That is how all of our original plays have evolved," valle said. "Philip takes into account the actor's range and talents and crafts a role true to the central story. Then, the actors and myself take the text and begin deconstructing it."

That deconstruction starts and evolves with movement, Elzalde said. In 15-minute exercises, the student actors would try things with their bodies, with their words, with lights, with sound.

"Finding different ways that we can create gestures with our body. You need to create a movement piece that has to do with love," Elzalde said as an example. "What's a scary thing you can do with your body under a strobe light?"

Most of it didn't make the cut.

"A lot of it was just a lot of experimentation," Elzalde said. "We were all just diving into this interactive, scary theater that's usually not done, and so how can we make it work."

Each person with a role in getting the production to the stage was there from day one. Actors. Set, light, and sound designers. Playwright. Directors. The tech crew, Elzalde said, doesn't normally get involved until a couple of weeks before the show opens. And tech week is traditionally when sound and light gets added to the production. But the tech crew was involved throughout the whole process, designing sound and light as the play developed.

"We were all collectively deciding what is a story that works, what is a story that can be told to an audience. It started off with our movements and then we added to the script as we went along. We called it a living document because it was constantly changing," Elzalde said. "We all envisioned the same world, which is why it was able to work."

During the first run of Ghost Ship in November, the crew staged 48 shows—at about 40 minutes apiece. During the second run, which ran for three weeks, they performed 44 shows to raise funds so students didn't need to pay out of pocket to travel to the festival. Often, the students performed three or four shows a night, every hour on the hour—with minimal time to re-touch makeup and re-cue the set before the next show. At KCACTF, the ensemble pulled everything out of a truck, set it up, put on nine shows, then struck the set, and packed it all back into the truck, 29 hours later.

"What we did at Cuesta prepared us a lot because we were used to getting ready quickly," Elzalde said. "We had our adrenaline going, so it was good for the show because it was high energy the whole time."

That energy flows all the way up to their fingertips, something Elzalde said Artistic Director valle likes to tell them. 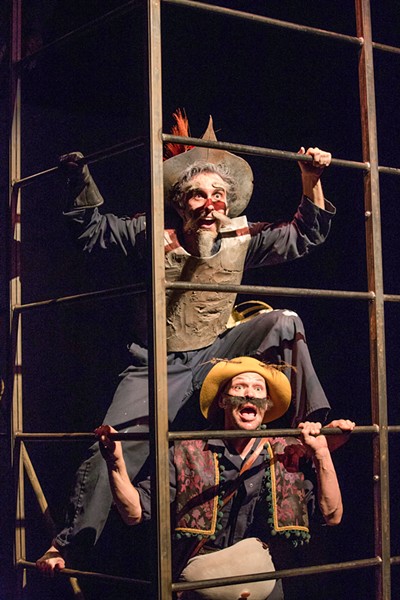 Fingertips, feet, body, gestures. What Cuesta does is physical. The actor becomes part of the work and pushes it forward, valle said.

"We call it 'dismantled theatre,'" valle said. "I believe that together as collaborators we can make something more compelling than only relying on the director, a solo voice to dictate the performance. Rather, each voice in the rehearsal room has importance—all the tech crew, all the designers, all the actors—together we have shared responsibility for the development of the show. Empowering the voices of all."

This way of designing and directing a play is a necessity, valle said, because it allows every student to be part of the process and keeps the numbers high in Cuesta's acting classes. Actors have to take those classes to participate in that semester's play, and the college requires the department to have a minimum student count of 16 in the class that performs a play.

It's hard to find plays with 16 or more characters in them, valle said. Plus, she said, each established play comes with a contract—a set of rules and conventions that could limit the scope of creativity and experimentation. Those plays also limit the types of actors who can participate. All of these reasons are why the program often performs original pieces, such as Ghost Ship, pool '63, and Refried Elvis.

"With original work, we can shape the play for those actors already in the company. We can also disregard or play with or disrupt issues of gender and ethnicity," valle said. "In the case of pool '63, we were emboldened by the murder of Trayvon Martin and felt this immediacy, a need to respond to that tragedy by focusing on the early history of the civil rights movement. That play, the one we needed to produce (and the one our audiences needed to see) didn't exist yet. So we made it."

The classes, CPAC supervisor Joan Hurwitt said, make it easy for the students to fit the play into their schedule. Most students work part time or full time or have families. Hurwitt added that the beauty of Cuesta is it's a community college, so the classes and the learning environment that valle and Jackson have created in the Drama Program are accessible to a wide range of people.

"Bree has really fostered such a creative and innovative space where students want to come and create really provocative art," Hurwitt said. "You always know you're going to get something special." Δ