'Exquisite Corpse' pops with color, blends into architecture at Kreuzberg

There’s a lot going on at Kreuzberg Coffee Company in downtown San Luis Obispo. So much that if you don’t look up, you just might miss it.

It is a very large surrealist-inspired graphic art piece where vivid colors contrast, interweaving black with trees growing into the sky and the Earth with a woman. One element from each panel of the piece bleeds over into the next, pulling a portion of the story with it and developing into something new.

Exquisite Corpse, is 8 feet tall and 30 feet wide, wrapping around the soffit that extends down lower than the rest of the ceiling, right above the coffee bar at Kreuzberg. It’s been a fixture at the coffee shop since it opened, even at the original Monterey Street location.

Designed by local visual artists Jimmy apRoberts and Brian Christopher, Exquisite Corpse was inspired and designed by a game or creative process of the same name. When apRoberts and Christopher were under a tight deadline to produce a piece for Art After Dark in 2006, the age-old drawing exercise exquisite corpse came to mind.

“It was embraced by the Dadaists and surrealists,” Christopher said. “The basic premise is you take a piece of paper and fold it into thirds. Someone draws on the first panel, but in such a way that their lines just go over the fold so their lines can be continued by the next artist. It was also done with poetry.”

The duo took that concept, but used Photoshop as their medium, with one only sending the other a one-eighth inch wide strip of the panel they had just completed as inspiration for the next panel. Both Christopher and apRoberts would only get to look at the whole picture after 12 panels or a round had been completed. 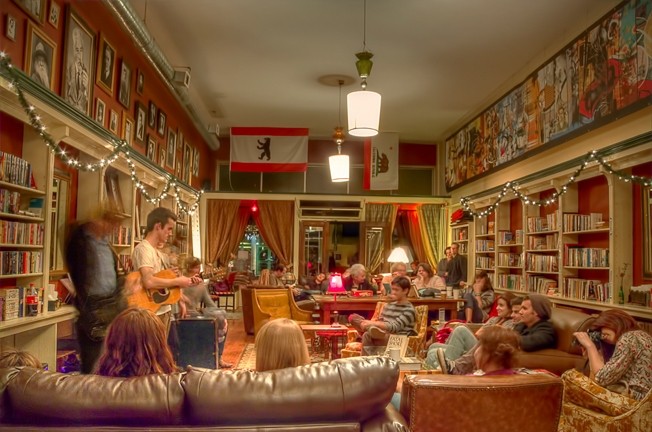 “Because Jimmy and I work together so much, our minds are kind of shared,” Christopher said. “A lot of the imagery repeats. There’s a lot of trees in there. It’s funny what ends up happening. The thing that’s appealing is that we’re not having to come up with meaning ahead of time. We’re just putting this together by visual decisions and quick ones.”

While prints of Exquisite Corpse have been displayed in gallery settings and sold on Etsy, apRoberts and Christopher both acknowledge that having their piece in a very public place where the sole purpose isn’t necessarily to consume art is a very different experience.

“A lot of times I wonder if people even see it,” apRoberts said. “In a way, it’s so big that it feels like it’s a part of the architecture, that it might get lost. When you have something that’s displayed on a wall in a more traditional way, people stop and look. You go to Kreuzberg to get a cup of coffee.”

Their piece came to call Kreuzberg home after Dave Whitaker, an acquaintance of apRoberts, told his brother and Kreuzberg owner James Whitaker about it. Exquisite Corpse just happened to fit perfectly above the space in between the built-in bookshelves and the ceiling at the coffee shop’s original location on Monterey Street, and it found another uniquely well-fitting spot when Kreuzberg moved over to Higuera Street.

“It was a piece of art that we came across that we liked and it fit perfectly,” James said. “Then it was fortuitous that it fit in the new spot too.”

While apRoberts and Christopher say much of the comments on the piece come from the online world, James said it also catches the curiosity of his coffee shop patrons.

“They’re always interested to know about the volleyball nature of how it was made,” James said. “I think people see it and think it’s cool. I definitely think it’s beautiful.”

And the game of back and forth is still going between apRoberts and Christopher, who now own and operate Subplot Studio, which offers design services for theater companies.

The print piece that hangs in Kreuzberg is comprised of about 36 different panels, but its digital sister is 72 pieces strong and still growing. While the last round of 12 panels was completed more than a year ago, the pair said next year just might be the year that Exquisite Corpse gets another limb. But they’ll need some external pressure first.

“We have to prematurely agree to an art show,” Christopher said. “Give us a deadline,” apRoberts added.

Ryah Cooley is always looking up because everyone else is too tall at rcooley@newtimesslo.com.