Nicki Parker of Heaven Squared Brownie Company believes wholeheartedly in the 80/20 rule of health, and so do I. It’s really the only way to go, if you want to 1) live a long life and 2) actually enjoy yourself while you’re living. Brownies rank high on my list of life enhancers, right after good cheese and salted meats.

Naturally, our conversation was punctuated by ceremonious forkfuls of thick, chocolaty goodness. Sometimes, you’ve just got to throw caution to the wind and let the crumbs fall where they may. 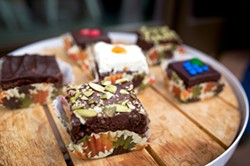 I know, right? You love her already. Parker knows that she’s loveable and she knows what people want. She likes to say that she spent 20 years in the medical industry making people healthy, and now she gets to make them happy.

And with 25 flavors of heavenly brownie offerings, including Apricot Cardamom infused with local Therabee Honey and luxurious Blueberry Syrah peppered with Paso Robles-based Robert Hall vino, she also understands the halo-effect that surrounds all things local.

“There’s not much that you can think of that we haven’t tried to make into a brownie,” Parker said. “There’s nothing controlling what we are doing except imagination and following the heath code.”

Beer geeks will rejoice in that yumminess that is Parker’s Pliny the Brownie, fashioned after the gold standard of IPAs, created by Russian River Brewing in Santa Rosa. No, the baker didn’t swipe the ultra-secret recipe for the cult brew. She simply asked a few solid questions, purchased the raw ingredients, and taste-tested like mad. Her trusted co-judges? A couple of San Diego friends who just so happened to own a brew pub.

“They had 150 people lined up to get a sample of Pliny the Elder one morning at 10 a.m., and that was my introduction to the beer,” Parker said. “San Diego is such a huge craft beer area, so I went around and started talking to the brewmasters. I used the actual malts, grains, and hops that the brewmasters use and integrated that into the recipe.”

It’s as if Parker simply said to herself, “Well, this brownie isn’t going to make itself into a delicious IPA-flavored treat. Someone’s got to do it.”

Many of Parker’s eureka moments happen like this. She gets a wild hair—maybe cherry-cabernet sauvignon or carmel macchiato—she sleeps on it, then she wakes up with the answer.

“It’s like magic,” Parker said. “It’s exciting and amazing, but I would be lying if I didn’t say it was a tad scary at times.”

Parker and her husband of 19 years, Jim, have a right to be a bit nervous. They both recently ditched their steady jobs in San Diego to move to Paso Robles and pursue the sweet life.

The decision was not easy, but it did lead to joy and freedom.

“For years, I told myself: When I retire, I’m turning my brownies into a business,” Parker said. “We don’t know what’s going to happen next, but we’re having fun with it.”

Although the couple has called Paso home for less than a year, they know what’s up with the food and wine scene. Like so many SoCal transplants, they were fans before they became locals.

“We used to come up for long weekends and made friends with the wineries,” Parker said. “We patterned our whole brownie business after the wine industry—that’s why we actually have tasting notes on all our brownies.”

Opolo Winery in Paso Robles recently presented a tasting comparison featuring its Mountain Zin alongside a mess of Heaven Squared brownies infused with the popular, peppery wine. With layers of flavor, notable tannins, and complex use of spice and depth, you can talk about these treats like your favorite glass of red. Or, you can just eat them.

Looking for a brownie spiked with your favorite vintage? Parker encourages custom orders, and is currently working on both a chocolate porter and nut brown ale flavor to satisfy her discerning customers.

“I will always bend over backwards to make a flavor happen,” the baker said, adding that she only uses high quality, single-origin chocolates. Parker is currently on the lookout for a fair trade, organic purveyor as well as local retailers to carry the goods. Orders currently come in via the Heaven Squared website, which accommodates deliveries to SLO County residents.

Parker is already busy with holiday gifts, and readers can order her cutely-wrapped boxes of six, 12, or 24 brownies for their loved ones now.

“The feedback has been amazing. Every comment is literally the ‘O’ face,” Parker said. “We are thinking of doing a compilation video showing all of the best Heaven Squared ‘O’ faces.”

Now that is something the public needs to see.

Truth be told, I too, rolled my eyes back into my head and squealed after nibbling on one of Parker’s sensationally spicy Ghost Chili brownies. Like I said, sometimes you just have to insert the chocolate and let the joy out.

And although Parker creates her flavors with a foodie’s fanaticism, she isn’t into overcomplicating the experience.

Like she told me: “Take a great big bite and chomp it on down. Just enjoy the heck out of it!”

Brown is the new black

Treat yourself to the craftiest local brownies in town at Shale Oak Winery’s Holiday Market Place event kicking off this Dec. 13 in Paso Robles. Or, order your own batch of Heaven Squared Brownies online by visiting heavensquaredbrownieco.com. Follow these delightful treats—from Lemon Goat Cheese to Rosemary Olive Oil—on Facebook for updates and upcoming tasting opportunities.