At SLOMA, Bruce Barton presents a collection of 'visual sonnets'

Bruce Barton insists he’s not all that into art. I can’t tell if he’s just saying this because no one expects him to, like Andy Warhol famously claiming “I like boring things,” or if he’s serious. 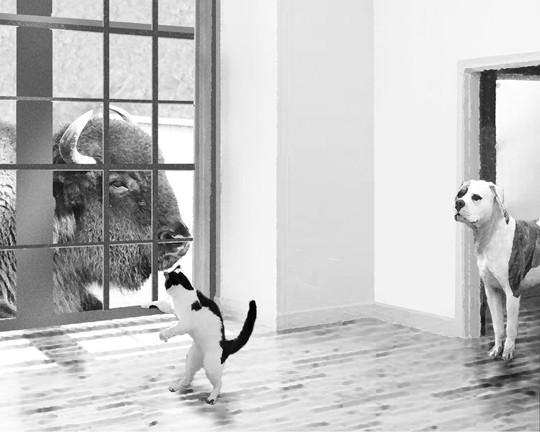 An exhibit of Barton’s near-photographic digital drawings—the majority of them bizarre juxtapositions of animals in human places and situations—is currently on view at the San Luis Obispo Museum of Art. But try and talk about art with him, and he bristles.

“It bores my butt,” the artist says, fervently.

Barton would much rather discuss the social narratives that populate his images: a dog riding shotgun in a pickup truck; two goats screwing in an art gallery; a pair of polar bears dancing atop a layer cake, the top of the Space Needle just visible outside the window, like an afterthought. I refer to these situations as “absurd,” but Barton quickly corrects me, countering that, on the contrary, they are purposefully mundane, modest, and ordinary. I get the feeling that no matter what I write about the exhibit, titled “Visual Sonnets,” Barton will disagree with it.

(The artist even challenges me when, absorbed in my note-taking, I absentmindedly mutter “interesting.” “Is it interesting?” he asks. Damn.)

Barton refers to the works he creates as “nature/culture dialectics,” an intersection of the natural world with the cultural life of humans. Often this intersection is oddly funny. A dog, limply trailing a leash behind him, pees next to a picture of Niagara Falls. In a piece titled Sonnet 11907: Bakersfield, CA, a sheep appears to graze on a houseplant, above which is a picture of a motorcycle in a gilded frame. The composition seems deliberately skewed, like a cropped photograph. The viewer sees only a portion of the story: part of the sheep’s body, the back end of the motorcycle, the top half of the plant.

A donkey, with a rooster perched on its back, looks amiably, quizzically, at the viewer, next to a sign that reads, “Go A Way.”

Other works are more poignant, more imbued with melancholy. There’s something sad about the lone dog howling atop an enormous pile of rubber tires in Sonnet 12276: San Luis Obispo, CA. In another work, a rooster in a pristine bedroom seems to gaze wistfully at the chickens in the coop outside. It’s as if these creatures have been trapped in our human world, a place where they can live but never thrive, where they might be cruelly punished for acting upon their instincts. There’s even something melancholy about the image of an empty art gallery filled with pictures of chickens, eggs, and nests—simple, outdoor life recontextualized into part of some glossy, human, indoor agenda; nature made into culture.

The head of a great, gentle cow peers through a window into an empty, white room. (Here, as in other places, the artist plays with scale and space, making the cow’s head bigger than the window. I ask Barton if this approach is informed at all by collage, which proves to be a mistake. I worry I may be boring his butt.)

There are, as far as I can see, no humans present in “Visual Sonnets.” One might not notice this right away, though there is, perhaps, a certain feeling of something being absent. Somehow, seeing the world this way, a world devoid of us, is inexplicably calming.

Barton also avoids using color. Otherwise, he says, “People get arty about it—‘Oh, that’s beautiful color.’ I want them to see honestly what it is they’re looking at.”

A graduate of the San Francisco Art Institute, Barton has exhibited nationally and internationally. Before he began “Visual Sonnets,” he says, he focused on drawing fish for 12 years. But in addition to the arts, Barton has also led a career in corporate communication, and once worked for Northrop Grumman Corporation as creative director for the B-2 Stealth Bomber project. He’s also published a book called The Tree at the Center of the World, a look into the traditions of California’s missions. He’s all over the map. It’s as if he’s lived his life determined not to be typecast.

Even Barton’s use of the word “sonnet” to describe his art—a word he says he chose to convey the pieces’ tightly structured nature—seems to hint at a sort of mavericky, cross-disciplinary approach.

Although he probably would disagree.

Arts Editor Anna Weltner has been labeled a non-labeler. Contact her at aweltner@newtimesslo.com.