'Extremely Wicked, Shockingly Evil, and Vile' is more interested in how Ted Bundy maintained normal relationships than in what motivated his crimes

Glen I, and I think all of us, should be embarrassed by our fascination with serial killers. After all, they're disgusting excuses for human beings who would be better off forgotten rather than a source of entertainment. And yet here we are watching another film about a depraved killer. Maybe it's because it's so difficult to imagine what it would take to go there—to lure, rape, and murder. Maybe it's because people like Ted Bundy had relationships, friends, and lovers, and we can't imagine how they didn't know, didn't suspect, didn't realize they were in the presence of evil. That's really what's at the heart of this new Netflix film, which almost never resorts to depicting the violence and the horror of Bundy's crimes. Instead, it focuses on his relationship with Kendall and her daughter as well as his apprehension, his escapes, and his eventual trial in Florida—the state that put him to death in 1989. His charisma and intelligence were enough to have many people believing he may be innocent, and the film has the good sense to allow its viewers the same misconception by never showing him committing his crimes ... until the very end. Instead of walking through the sleaze and sensationalism of Bundy's deeds, this film is about how he manipulated and how he passed through society undetected, eventually killing 30 women. Pretty boy Efron, who grew up in Arroyo Grande, is perfectly cast as the killer, and between his resemblance to Bundy, his skillful affectation of Bundy's mannerisms and speech patterns, and the public's knowledge of Bundy and his crimes, it feels like you're in the moment. I just feel a little guilty that I'm interested and giving this reprobate my attention 40 years after his crimes and 30 years after his execution.

Anna As someone who is enthralled with the world of true crime, this is an argument I've had countless times. Bundy was fractions of what he has been touted as for years—a good looking, smart, charismatic charmer. It simply isn't true, and glorifying a malicious killer should never be the aim in any type of retelling. However, Bundy is a fascinating character even beyond what is covered in the film. His trial was a sensation—the first to be aired on television—and his antics were so bonkers that the country—young, pretty women in particular—was fascinated by him. I appreciate the approach this writer and director took with the film, focusing in on his relationship with Liz, his trials, and escapes. Interspersed with re-created news footage and home movies, there is no denying Efron's resemblance to Bundy. For people less familiar with Bundy's string of trials, they may find some of his antics shocking. He escapes prison twice, once by leaping from a window and once by crawling through a duct in the ceiling. He fired his lawyer and represented himself. He manipulated the system any way he could, and he maintained his innocence until the bitter end. This guy was a piece of work. As someone who is very familiar with his life before, during, and after his horrific crimes, there was nothing new here for me. However, I think Efron did a fantastic job as the ruthless con man, and the fact that they chose to not re-create his crimes on screen was very much appreciated. 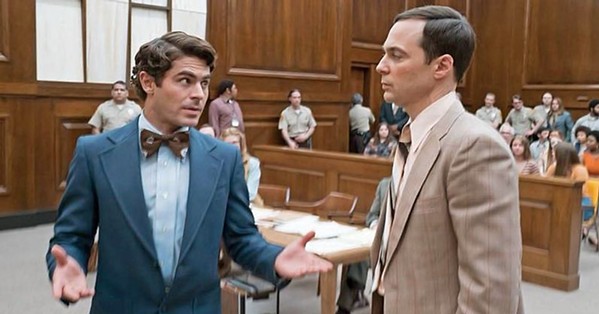 Glen Aside from Kendall, who eventually withdrew from Bundy, he also found a partner in Carole Anne Boone (Kaya Scodelario), who sought him out in Utah when he was on trial there and again in Florida, where he went after his second escape and where he murdered his final two victims. To escape twice is pretty remarkable, and to escape, move to a new state, and start killing again is even crazier. Unlike a lot of serial-killer films, this one takes no interest in what drives Bundy. There's no backstory about an abusive upbringing, no attempt to understand what motivated his heinous crimes. I think that's a problem because I want to know why anyone would do what he did. The film's so busy showing Bundy's kinder side that it offers no insight into the why of his murders. How was he able to have a seemingly normal relationship with Kendall? How did he climb into bed with her, charm her daughter, make her love him, and never resort to violence against her? What's the switch he was able to turn on and off again? Maybe Berlinger, who's best known as a serial-killer documentary filmmaker, doesn't know, or maybe his documentary background prevents him from editorializing. For me, it's the big missing piece of this puzzle. If you want to see a film that depicts how a serial killer charmed those around him, this might do just fine, but if you're hoping for insight and answers, you'll find none here. If this was in theaters, I'd probably tell you to wait for a rental. Since it's on Netflix, let your schedule be your guide. Got a couple of hours to blow? Watch it for nothing else than Efron's performance. It's the best thing about this film.

Anna It is 30 years after his death and yet the fascination with Bundy is still strong—Netflix also released Conversations with a Killer: The Ted Bundy Tapes earlier this year, and Theodore: The Documentary by director Celene Beth Calderon is in post production. That film takes the focus away from Bundy himself and instead shares the stories of victims and survivors, which is absolutely who should be recognized and lauded on screen. I can't quite pinpoint the intended audience here, though Netflix is full of true crime documentaries and series, so this does seem like a logical project for their production company. This movie is based on a book written by Ted's longtime girlfriend, Liz, and while I haven't read that, the details of their life together were already known to me after reading The Stranger Beside Me, a detailed account of Bundy's life in its entirety by true crime queen Anna Rule. I think one of the fascinations with this particular monster is that his motivation is so unclear. After receiving his death sentence, Judge Cowart (John Malkovich) told Bundy, "It is an utter tragedy for this court to see such a total waste of humanity, I think, as I've experienced in this courtroom. You're a bright young man. You'd have made a good lawyer, and I would have loved to have you practice in front of me, but you went another way, partner." There is no accounting for Bundy's horrific actions, and the fact that he wouldn't own up to them until the very end in a ploy to stay his execution shows just how wicked, evil, and vile he really was. Efron gives a great performance, and this is worth watching for that. If you want the real nitty-gritty minutiae of his life, trial, and his victims, pick up a copy of The Stranger Beside Me and prepare to be even more disgusted by this killer. Δ