Eye of the beholder

Or how I spent five bucks

I should have gone yesterday,” I’m thinking to myself as I drive out to Morro Bay on Sunday, April 11, for the citywide yard sale. Gray clouds blanket the sky. Wind whips through the trees. I figure I’ll attack the town from the south and head north, so I’m sneaking in the back way, cutting through the golf course and taking a right onto Kern Avenue, the location of two of the 75 or so Sunday garage sales.

There were about 100 official locations on Saturday, but I heard from a friend that there were actually more—a whole lot more of Johnny-Come-Latelys who set up shop at the last minute to take advantage of all the bargain hunters.

The first thing you need to know about this event is to WATCH OUT! When people are driving around looking for yard sales, they’re not paying attention to the road.

Just like last week at the SLO swapmeet, I’m on the lookout for art. The first three locations I visit are filled with junk, clothes, toys, bric-a-brac, kitchen items … no art. Hmm. There’s a portable 8-track stereo that’s semi-awesome. Ten bucks? Sold! But I’ve got to find some art!

I start doing some math. I’ve stopped at three locations, and I’ve been here 30 minutes. It’s now 9 a.m., so even at this rate the best I can hope for is 36 more sales before the 3 p.m. closing time. What if I don’t find any art to write about?

I pull over and walk down a driveway. More kitchen stuff. A woman behind a card table talking to some women about beauty creams and stuff. A shotgun shell re-loader. Hmm. Nope, it’s for a 20 gauge. Hey, wait a minute. There, in the back of the garage, are three things leaning against a workbench.

One’s a print of Picasso’s Nude with a Towel, and it’s really old. There’s a tag that says “$79 Antique Picasso Print (Color coordinates with paisley duvet cover),” and sure enough, a paisley duvet ($49) is sitting next to the print. I’m not sure how Picasso would react to his print being sold in conjunction with a bedspread.

Next to this print, however, are two really remarkable Cibachrome photo collages by Enid Fisher for $30 each. It turns out all three pieces belong to Bonnie Wolfe.

“I’m moving to Los Osos and trying to thin down,” she explains. “These just aren’t going to work in my new place, and I’m hoping to get a little cash for the move.”

If I had $60 to burn, these photos would be mine. They’re really kind of creepy, especially The Blind Doll, which features a little black baby with its eyes cut out. I’ve been poking around for 20 minutes, so I shove off, and next I come across Barbara and Jeri Saia’s sale. They don’t have any art—well, unless you count these really kitschy pineapple lamps—but I do pick up four nice throw pillows for $10. Then Barbara points out her shoes: hand-painted Vans decorated with cupcakes and El Dia de Los Muertos-style skulls by her daughter Natellie.

After a string of another five sales with no art—argh!—I decide to hit one more before I give up. There’s some duck prints. Pretty cheesy, but as I move them to get a better look, I see a little painting of an orange. It looks old! The paint’s cracking in that old painting way. Seeing my interest, the guy there, Brian, tells me to wait a minute—there’s something in the garage I might want to see. A couple minutes later, he comes out with four more things under his arm. One’s a print from a Hawaiian artist named Herm Lau, two are from a local Morro Bay fellow (J. Senclair) who died a few years ago, and the final one is a little painting of Berchtesgaden, Germany, near Hitler’s Eagle’s Nest. It’s covered in bird shit and feathers. Eagles? 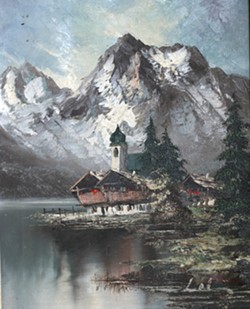 “Um, yeah, it needs some restoration,” says Brian, who tells me it belongs to his stepdad, who went to the store. “Make me an offer.”

On the back is an old typed page saying it’s by an artist named M. Hoetel. When I get home, I look him up on the Internet but find nothing—then, as I look closer at the front after swabbing off bird shit with a Q-Tip, I see “Lei.” Nope, nothing on the Internet about a Lei in Germany either.

Oh well, what do you want for five bucks?

Glen Starkey is willing to haggle. Talk him down at gstarkey@newtimesslo.com.