Eyes are on Paso prison plans

State officials are steaming ahead with plans to convert the Paso Robles Youth Authority facility into a prison for senior citizens, regardless of what the neighbors and city leaders think of the idea. But the Paso Robles City Council will have a say on another prison proposed for the 160-acre Airport Road site: a "rehabilitation" facility for local offenders facing parole.

Known as a "reentry facility," the new concept is designed to

# counteract California's record-setting rate of recidivism, where seven out of 10 prisoners end up back behind bars. The San Luis Obispo County Sheriff's Department is pushing the proposal in the hopes of receiving state funding for a new women's jail near SLO. Counties with a site for a reentry facility will receive priority for funding new county jails.

Under A.B. 900, California's prison reform legislation, the Paso Robles City Council must pass a resolution of support for the new "reentry" prison before it can go ahead.

But many questions about the proposed facility remain unanswered, even after officials from the California Department of Corrections and Rehabilitation met with city officials and concerned residents in a standing-room-only session at City Hall on April 28.

"There's good and bad to this, but there were a number of questions they didn't have answers for," Paso Robles Mayor Frank Mecham pointed out in an interview outside the meeting.

"There's just not enough clarity on what exactly does this mean. This is a test case--the state hasn't done this yet. I understand the concept of rehabilitation, but how much do you want to put on one community?

"I could imagine the City Council voting no if we hear from enough folks who are opposed to this," Mecham added.

# The mayor and other city officials are also concerned about the conversion of the former boys' school into a 900-bed prison for senior citizens, all men aged 50 and older. That plan--which doesn't require City Council approval--includes erecting two 14-foot fences around the perimeter, complete with razor wire and guard towers, all in a highly visible location near the airport and next door to a new business park.

Inside the fence will also be a 100-bed prison for younger men who will serve on a fire crew for CalFire.

So far, Paso officials have convinced the state to consider a Tuscan-style design for the guard towers to fit in better with the local landscape. They're also encouraging state prison officials to hire the staff from the soon-to-be-closed youth authority.

The proposed 200-bed "reentry" prison on the site may be an employment boon for the Paso Robles area. Although it's still unclear exactly how prisoners would be "rehabilitated" for their "reentry" to the community, an information sheet handed out at the April 28 meeting stated that the new facility would employ people with specialties in education, health care, substance abuse counseling, arts, recreation, and "other essential program areas." 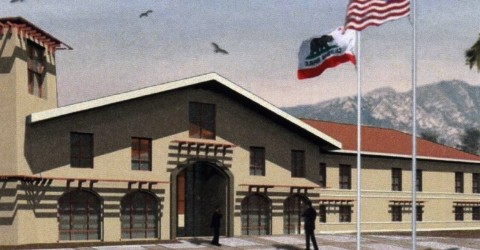 # "The principle of best practices and promising programs will be part of the program planning," the handout explained, without including details.

Local employers will also be asked for advice on job training for prisoners who are facing release in SLO County. Of the county's 524 current parolees, 30 percent served sentences for drug offenses, 31 percent for property crimes, and 28 percent for crimes against people, according to state figures.

A new "reentry" prison will target inmates and parole violators "who are most at risk to re-offend when placed in the community," according to the handout.

State prison officials will announce on May 8 whether SLO County has been selected for a "reentry" prison and a state-funded--non-Tuscan-style--county jail for women.