Justin Lin (Better Luck Tomorrow, The Fast and the Furious: Tokyo Drift, Star Trek Beyond) directs this ninth installment in the popular Fast & Furious franchise. This time around, Dom (Vin Diesel) is confronted by his estranged brother, Jakob (John Cena), who's been enlisted by villain Otto (Thue Ersted Rasmussen) to find a device that can upload a computer virus to a satellite and give Otto control of all the world's weapons systems. (145 min.) 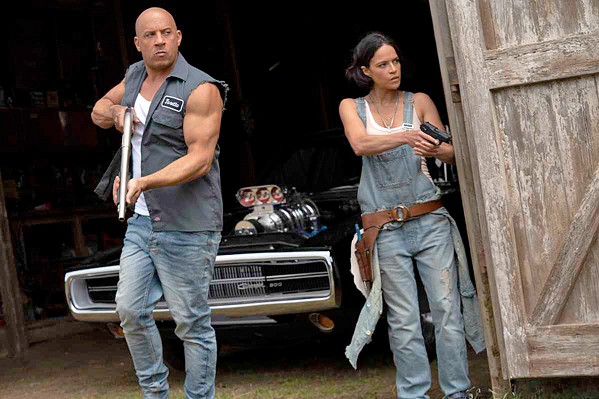 Glen If you have a middle-school grasp of physics and a general idea of how magnets function, you're going to have a really hard time suspending your disbelief for this inane pile of over-the-top nonsense. Between the stunts and the "technology," almost every moment on screen is preposterous in this unintentional comedy. When it's trying to be funny, it's not, and when it's trying to be serious, it's laugh-out-loud hilarious. I'm not familiar with the entire series, having lost interest early on, but apparently the franchise's raison d'être is to one-up—or maybe 10-up—its predecessor to the point of utter absurdity. The film opens with a flashback to Dom and his brother, Jakob (Dom has a brother? Apparently!) watching their father in a race that ends in tragedy. Dom lands in prison for beating up the driver that caused the crash but comes to the realization that his brother is actually responsible. After Dom is released, he and Jakob have a street race, with the loser being exiled, which explains why we didn't know about Dom's brother for, like, eight films. Dom's now retired from the international saving-the-world game, living in seclusion with his girlfriend, Letty (Michelle Rodriguez), and Dom's son, Brian (Isaac and Immanuel Holdane), from a previous relationship. Then his old crew shows up. Just when he thought he was out, yada yada yada, car races, explosions, fistfights, gun battles, and a rocket-propelled Pontiac Fiero in space. Ta-da!

Anna I'll preface this by saying the only related film I've seen was Hobbs and Shaw, so I have no idea who these characters are, what they've done in the past, or how they relate to each other. Needless to say, it didn't take more than a minute to get the gist, and even without their backstories, I was able to piece together enough of the relationships to not feel lost. Over-the-top insanity follows for a solid 2 1/2 hours where each scene is trying to one-up the last and where the writers prove that much like Insane Clown Posse, they too have wondered, "Water, fire, air, and dirt. F***ng magnets, how do they work?" Well, kids—it isn't like this! I can tell you that much. The dialogue is eye-rollingly bad or cheesy, but let's face it—we didn't come here to hear Shakespeare. This is all about cars that swing off of a cliff, catch onto a metal cable, and land safely on the other side of a canyon, which is apparently across some border. It's a wild ride, and one I never, ever intend on going on again.

Glen Nice Insane Clown Posse reference, dear! A lot of the characters are fun in their own particular ways. Roman (Tyrese Gibson) has a theory that they're all unkillable, otherwise how would they pull off these amazing stunts and weather these hails of gunfire and never get so much as a scratch on them? That's about as close as this film gets to acknowledging how outlandish it is. Ramsey (Nathalie Emmanuel), the British tech whiz, manages to hold her own in this boys' club, making her my personal hero. Otto (Rasmussen) is a scenery-chewing villain who's gleefully evil in an adolescent way. My trio of favorites is Sean (Lucas Black), Twinkie (Shad Moss), and Earl (Jason Tobin), who are the Pontiac Fiero "engineers." They're the closest we get to intentional comic relief. There is also a bevy of gig stars in small roles like Charlize Theron's Cipher, Kurt Russell's Mr. Nobody, and Helen Mirren's Queenie, and they all do their part to make this as watchable as possible, but they're no match for the real battle between Diesel and Cena to see who can offer the most wooden performance. I'm calling it a tie, and the audience is the loser.

Anna Here I thought those two were in a thick-neck contest, which is also a tie and also puts the audience solidly in the loser position. We know why they're here though: Someone has to fill the screen with an outlandish amount of muscle. I actually really liked Roman. He was a little bit of comic relief, and those few moments where the film isn't taking itself seriously are welcome. Kudos to the actors who managed to not have their characters killed off and continue through this series. There's no end in sight, and these films are always huge money machines. Its first weekend made more than $70 million, and we're just barely walking around without masks on, let alone back in theaters! There's only one way to see movies like this, which is on a big screen. Can your huge flatscreen translate closely enough? Maybe, but would I have actually watched it if I had the option to get up and entertain myself with a nice puzzle or podcast in the other room? Probably not. If you're a fan, you know it and you don't need me to tell you how to spend your money, so if seeing unbelievable driving surrounded by an even more unbelievable storyline is your jam, have at it. Δ