It all started with Steve Caparone, a former student who grew older and more experienced with the imbalances of existence,” David Settino Scott said of his newest endeavor, portraits of 44 of his male friends. “His was the first portrait that I did.” 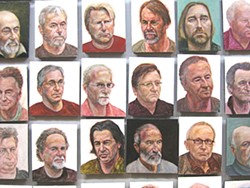 On July 1, David will attend the opening reception of his new show at the Steynberg Gallery, displaying all 44 of these small, intimate portraits.

“I didn’t intend to start a project,” Scott said. “Steve and I were hanging out in the studio and we were bored, so I asked him to sit. He came back for two more sittings, and I was so pleased with the exchange and the process that I decided to continue to make portraits of my friends. I’d intended to do about 12, but the project sucked me in. Then I painted my friend Marc Norman, who wrote Shakespeare in Love, among other films. His wife is a psychologist, and when she came to the studio and saw all the portraits, she suggested having everyone write about his experience of sitting for me. It really fleshes out the show and is an important addition, because it makes these people very real, and it’s something I wouldn’t have thought to do on my own.”

Some of his models, such as Michael Hannon, wrote poems: What face is this/ the painter sees?// A mask—a Janus./ Pain without humor,/ the whole face hidden/ in the face that guards/ the secret heart.// An honorable working/ by an honest friend.

Others wrote narratives of the experience, such as John Laughney: I wandered into David’s studio that day to find him surrounded by stacks of paintings leaned up against every available vertical surface. Some of the paintings still had their protective cardboard and duct tape wrappers. He was putting them back in their storage spaces after spending the better part of a year preparing them for the biggest exhibition of his career. He had made a lot of paintings in 25 or 30 years. These paintings were his life work. The show was over.

“What the hell are you going to do now?” I asked him.

It was kind of depressing.

“What are you doing today?” he asked.

“Come over here and sit in this chair.”

“I’m going to paint your portrait,” he said.

He got started quickly. After a little while he asked, “Do you mind if I turn on the radio? Because sometimes I like to listen to the radio when I paint.” 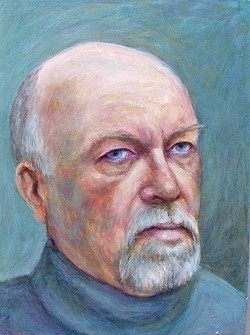 He switched it on. It was some kind of news program about the latest war atrocities in the Middle East or Afghanistan or some place. I sat still, he painted, and we both listened. The people on the radio talked urgently about the war on terror, roadside bombs, extremist factions, and American policies. I asked David about his time in the military. As he painted, he told about the time he spent in Cuba when he was in the Navy. Some time passed.

“Do you need to take a break?” he asked.

I got up, stretched, and walked outside. When I came back, the news program was off. We got back to work and the beautiful Cuban music he put on filled the studio. 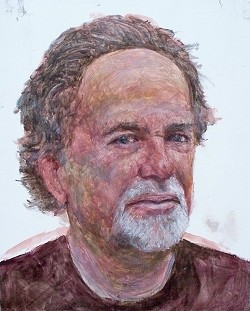 Of course the question that’s frequently come up among Scott’s female friends is: Why no female portraits?

“Ha! You know I love women—they’re so beautiful—but I feel like if I can’t capture that beauty then I want to forego it,” he said with a laugh. “When I paint a nude, that’s a figure painting, but painting a face is difficult. I love women, but I don’t want to make them look ugly! I’m just not that good!”

Ah, modesty. In the spirit of full disclosure, I should admit that both New Times photographer Steve E. Miller and I were among Scott’s models. I’m the good-looking one. Miller’s is the one that looks like a portrait of Rubeus Hagrid.

These are fascinating glimpses, a moment captured, an interpretation by a man who “sees” for a living.

“I just wanted to pass the time in a positive way,” Scott said. “Later, I realized what a treasure it would be to accumulate portraits of my friends, and I started the process of making what is now an exhibition. I intend to continue doing portraits beyond this show. Why stop?”