The owners of a local martial arts gym are in the midst of a nasty fight, but unlike most of their battles, the punches being thrown aren't in a ring—they're on the internet. 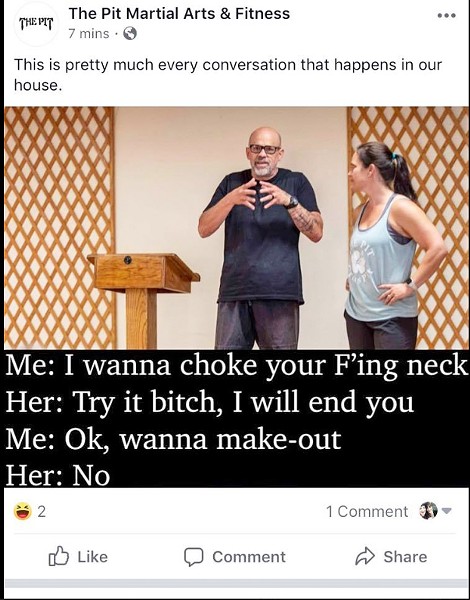 John and Heather Hackleman, owners of The Pit Martial Arts and Fitness in Arroyo Grande, are facing scrutiny after posting a homemade meme on Sept. 8 that some felt poked fun at domestic violence situations. A single comment condemning the post spurred an impassioned back and forth between the Hacklemans and the commenter, leading to online harassment, threats, and The Pit's first ever negative reviews on Yelp, which were eventually removed for violating the platform's terms of service.

"It was shocking and it was upsetting because I've never had this stuff happen before," Heather told New Times. "I felt that we were being attacked and that our business was being attacked."

The meme in question depicts Heather and John standing next to each other, John motioning as though he's going to choke Heather. The meme is in a conversational format, with John saying, "I want to choke your F'ing neck." Heather responds, "Try it bitch, I will end you." John says, "Ok wanna make-out?" And Heather replies, "No."

The caption posted alongside the meme reads, "This is pretty much every conversation that happens in our house."

Although the original post and many of the comments associated with it were deleted, screenshots provided to New Times show that the situation quickly escalated after one Central Coast resident, Whitney Fugate, commented, "This sounds like domestic violence, but ok."

"If this meme honestly sounds like domestic violence to you," The Pit responded in a comment, "and not the self-deprecating humor it was intended to ... you have way too thin skin and seriously need to lighten up ... hopefully you were joking."

Soon the negative comments on the post were deleted, offended commenters blocked, and then the original post was deleted entirely. On Sept. 9, Fugate created a post of her own about the meme, saying she was appalled that a local martial arts studio would promote, even unintentionally, domestic violence. Several of Fugate's followers responded with outrage to the meme, throwing out insults about both John, Heather, and The Pit, and calling on each other to leave negative reviews for The Pit on Yelp and Google.

When Heather saw those comments on Facebook, she immediately checked The Pit's Yelp page and saw several of the first negative reviews the business has ever had, all citing the meme and giving one star out of five. None of the reviews were written by people who have ever stepped foot in the gym, Heather said, and one was even written by someone living in Tennessee.

Although Heather was able to get those reviews removed, she said she wishes Yelp and platforms like it had a more efficient way of policing for fake or malicious reviews. Reviews online are huge, she said, and these days most consumers check out customer ratings before using any business.

A spokesperson for Yelp said any review can be flagged by users or business owners, and those reviews are then evaluated by Yelp's content moderation team. Yelp reviews are required to describe a firsthand consumer experience, and reviews that don't focus on such an experience are often removed.

Yelp also uses an automated recommendation software that is engineered to highlight the most useful and reliable reviews by continuously evaluating dozens of signals, the spokesperson said. Reviews that might be solicited or biased may be moved to a business page's not-recommended section.

None of the negative reviews were written by Fugate, the original commenter who called out The Pit's meme. Although Fugate herself received threatening messages from fans of The Pit, and was the target of harassment and name calling over the situation, she never asked anyone to leave bad ratings for The Pit publicly online.

"I never promoted that," Fugate told New Times. "I never would. I grew up with a small business in the area. But I think it's a way to have a little bit of power on the internet. We the people have a voice too."

Fugate said she didn't even want an apology, which she never got; she just wanted the meme off the internet.

John, the owner of The Pit, said the meme was supposed to be empowering to women. The photo included in the meme was taken at a women's self-defense training that he and his wife taught, he said, a class The Pit often offers along with anti-bullying classes and other self-defense classes for kids and adults.

He said it's ironic that people who are apparently so against domestic violence are willing to cyberbully small business owners, and that verbal violence is just as bad as any other kind. Meanwhile, he's dedicated his life and career to teaching people how to protect themselves from attackers when necessary.

"If I truly offended anyone I'm really sorry," John said. "But I honestly don't think I did." Δ