Cambria's playhouse is temporarily closed for lack of a sprinkler system 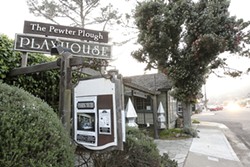 The latest drama unfolding at the Pewter Plough Playhouse is a ticket-free affair that has not only drawn the curtain on stage productions, but shut down the entire structure, piano bar and all. Supporters of the playhouse have until July 31 to raise $32,000 to install a new sprinkler system, and in the interim have been banned from opening the playhouse to the public.

According to Pewter Plough representatives, the trouble started in 2007 when then fire marshal Michael Miller made a routine inspection of the building and discovered a number of fire safety code violations. Miller, who is now Cambria’s fire chief, dates the code violations much further back, citing a 30-year history of failure to meet contemporary safety standards. Though the two camps might sound like they are at odds, playhouse representatives characterize their relationship with the Cambria’s CSD Fire Department as amicable, and Miller insists that he’s doing everything he can to ensure that the purchase and installation of the sprinklers is feasible.

Miller first toured the playhouse—originally a single-family dwelling that Jim and Olga Buckley purchased and converted into a playhouse in the ‘70s—in 2006. That same year county officials and the Cambria Fire Department began a campaign to get the playhouse up to code, without much progress.

“There were problems with the structure, the storage of materials. They had a lot of stage props. They had flammable paint thinners that they were storing by the stage in a closet,” Miller described. “On the other hand, the Pewter Plough has always been kind of an entertainment amenity in this town. As a fire code enforcer I have to try to weigh between what’s too big of a hazard and keep the quality of life intact. I definitely didn’t want to run them out of business.”

The following year the Pewter Plough Playhouse was sent a letter with a list of required upgrades. To renew their permit, issued by the county, they would have to makes tens of thousands of dollars of upgrades. Between 2007 and 2009 the majority of these improvements were made, including new exterior fire-retardant siding for the back of the building, permanently securing auditorium seating to the floor, a new electrical system for stage lighting, and a new emergency exit—changes to the tune of $22,000 according to the playhouse.

The last and most expensive of the upgrades, the installation of a sprinkler system, still hasn’t been made. In late November playhouse supporters sent a letter to Chief Code Enforcement Investigator Art Trinidade requesting a one-year extension. In early January, Buckley received a response from Trinidade stipulating that if the sprinklers were not installed by Jan. 30 the theater would have to close. Buckley then appealed to Supervisor Bruce Gibson who, with the help of Miller, negotiated a deal with the county. The playhouse would be allowed to remain open through the scheduled conclusion of its show Finishing Touches, on Feb. 28. In order to do that, a fireman would have to be present at every performance and the playhouse had to reduce its capacity from 61 to 45 seats. Rather than pay an estimated $90 each night for the fireman, the playhouse secured retired fire captain John Brennan to do the job for free.

Besides extending the deadline an additional six months, Miller attended a board of supervisors meeting and successfully petitioned that the board waive the playhouse’s permit fees. The CSD also moved a water main and brought in a water line to supply the sprinkler system, significantly reducing the expenses of installing a system.

Still, playhouse representatives are frustrated that they have been banned from using their facilities in their fundraising efforts.

“If we’re open we’re in touch with the playgoers,” said Buckley’s son, James. “Also, we have some money coming in to pay the overhead. Now we’re disconnected in a sense. We have to do even more outreach.”

The effort kicked off with a public meeting after the final show on Feb. 28. Attendees made suggestions for fundraising including a golf tournament, wine tasting, and pairing with a restaurant for an evening. The playhouse also announced that it welcomed donations of any size. The campaign kicks off with a Save the Playhouse Benefit at Cambria’s Vet’s Hall on April 18.

Ordinarily, Buckley assumes responsibility for any upgrades that need to be made at the playhouse. But in 2007 he was one of thousands of local investors to lose their life savings in the Estate Financial fraud case in 2007. According to James, his father lost $1.6 million, making it difficult for him to continue to privately fund the theater.

“There was certainly nothing wrong with what we were doing,” he said. “Once you’re in a situation where you have someone coming in and looking for things, they’re going to find things. Some of the things they had us do we had on our list for awhile.”

But Miller insists that there’s no question that the situation was unsafe. He referenced a nightclub fire in Rhode Island that killed 100 people in a matter of minutes, and pointed out that the victims of that fire were, on average, considerably younger and more nimble than the average Pewter Plough patron.

“If that situation occurred at the Pewter Plough, with the age of that crowd, I don’t think anybody would get out,” he admitted. Of course, that was prior to the safety improvements that have been made over the past two and a half years. But the most important feature is the sprinkler system, which would have given the crowd at the nightclub enough time to escape, had one been installed. Miller is frustrated that the issue has drawn out as long as it has, and another anonymous public safety official speculated that the decision-makers at the playhouse may have been trying to get out of installing the sprinkler system altogether on the strength of the fact that they had completed the other items on the list.

Miller also points out that the Pewter Plough Players do have other venue options while fundraising for the sprinkler system. The old grammar school is a performance-ready venue that meets all required safety codes. But, for now, he’s doing everything he can to make their chosen course a little easier.

“We live in a modern society where certain things aren’t really acceptable anymore and there’s liability attached. It’s definitely an obvious issue,” he explained. “But I think when all is said and done they’re going to be very happy they’ve invested in the playhouse and made it a place where people can enjoy plays in a safe environment.” ∆