Writer-director and controversial leftist polemicist Michael Moore (Bowling for Columbine, Fahrenheit 9/11, Sicko, Where to Invade Next) takes aim at the Trump era, asking how we got here and how we get out.

Glen I think of Michael Moore as the left's Dinesh D'Souza, except Moore is not a convicted felon who was pardoned by Trump. Moore does, however, engage in similar tactics as D'Souza, cherry-picking facts and examples to bolster his narrative. In this case, Moore's story is that Trump never wanted to be president and his entire campaign was a stunt to get NBC to pay him more as the star of his former reality TV show The Apprentice. Moore also demonstrates that Bernie Sanders was robbed of his shot at the presidency, including making the case that the Electoral College electors of states such as Vermont completely ignored the will of voters, who overwhelmingly chose Sanders over Hillary Clinton. Inside his explanation of how Trump inexplicably made it to the White House is also a scathing indictment of Michigan Gov. Rick Snyder and his woeful handling of the Flint water crisis, and just to make sure liberals aren't too smug, he skewers Obama for his lack of action in Flint and pillories the Democratic establishment for not staying true to its core values and for misreading the public. Moore's claim is that the Democrats went wrong starting with Bill Clinton, whose centrist positions, mass incarceration of minorities, and dismantling of the social safety net turned Dems into de facto Republicans. It's all very depressing. Yet, there are also many moments of levity and poignancy. True progressives will certainly be buoyed by the film, but mainstream Democrats may feel rebuked. A conservative, should one accidently attend the film by walking into the wrong theater, will also enjoy Obama, both Clintons, and the Democratic power structure being attacked by Moore. He certainly makes an interesting case, but as with D'Souza, I question Moore's ability to be fair. He's a one-sided filmmaker, and this time around he's both preaching to and attacking the choir. 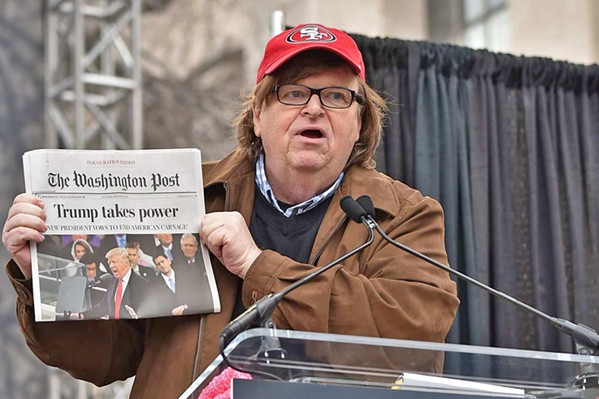 Anna Moore is certainly a filmmaker that you can see coming, and this piece fit right into his expected narrative. The storyline became a bit disjointed for me, jumping from an indictment of Trump to Flint to Obama to March for Our Lives and union movements, all attempting to wrap it up in a neat package, but falling a bit short. At just more than two hours, Fahrenheit 11/9 felt a little long for my liking. While it did a fantastic job of riling me up and pissing me off, I'm not sure what to come away with except a general malaise of doom and gloom. I was introduced to some things I wasn't aware of, as you mentioned Bernie Sanders apparently won in many states that then claimed to have a majority vote for Hillary, a vastly infuriating fact if indeed true. I do take Moore with a grain of salt. He does skew his narrative unapologetically to his left agenda. Full disclosure—I'm also unapologetically left, as (I assume) was the entirety of the audience. There were plenty of shared laughs, groans, and sighs to know we were in the company of fellow liberals. It's probably not a film that's going to change minds, but instead it tries to set a fire in the hearts and rile up activism in the young men and women about to reach voting age.

Glen Many of the film's most emotionally potent moments are thanks to Emma Gonzales, the Stoneman Douglas High School shooting survivor who spoke so effectively and passionately at the March for Our Lives rally. Moore certainly capitalizes on her and other activists' supercharged spirits. He introduces us to pissed-off liberals running for various offices, suggesting that if progressives stop appeasing conservatives and meet them head on, liberalism can win control again. Through polls and stats, Moore makes a convincing case that the majority of the U.S. supports progressive positions, and that conservatives' stranglehold on power is manufactured by manipulating the system. About this, I buy his argument completely. Between gerrymandering and voter suppression, the right has seized control. More troubling, Democrats are complicit, taking money from the same corrupting influences and propping up the same greed machine. Moore has some important lessons to teach, but his heavy hand—such as yet another extended comparison between Trump and Hitler—acts like a cudgel and undercuts his ideas. As entertainment, Fahrenheit 11/9 delivers. As left-wing propaganda, it's mostly successful. As a film that might actually change some minds and work toward fixing the divide between conservatives and liberals, it's an abject failure. The question I'm left with is which of these, if any, was his goal? I honestly don't know what he hoped this film would accomplish. 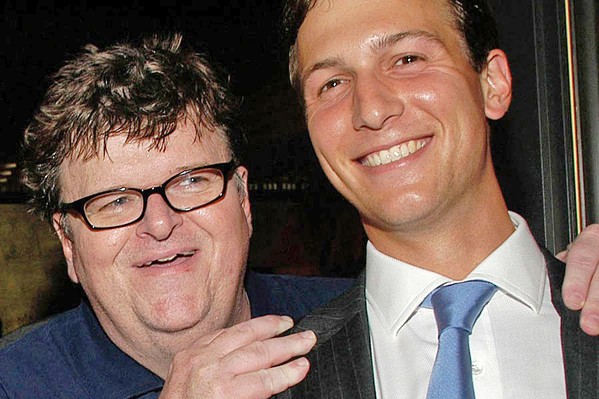 Anna Sometimes anger builds and you can't help but throw a punch, even if the intended target is thin air. It's that cathartic release of anger that lets you move on, and maybe the real intention of this film is to share that gut-punch to the right experience. I don't think the film will be particularly effective in changing minds, but its content is valuable, and Moore's message and call for awareness is clear. In the beginning, Moore himself admits to a little overly cozy relationship with some on the right and calls himself out for backing down years ago when he and Trump appeared on Roseanne Barr's talk show together. He isn't afraid to admit his own guilt when it comes to elbow rubbing with the best of the worst, and he wears his passions on his sleeve. Obviously as his hometown, Flint's water crisis is the first and foremost concern for Moore, and he isn't afraid to call out Obama for his inaction. He makes clear that we can't take for granted a win by the reasonable and viable candidate, that there is in fact a reason we ended up here with a misogynistic reality star as president and no one to blame but ourselves. Go grab some popcorn and see this one when it's going to feel good to get pissed off, but also laugh along the way. Luckily, Moore knows how to tie the two together. Δ