In some ways, the era that marked the “Me Generation” seemed like a cultural wasteland—shallow, corrupt, and sleazy. The most popular artist was Patrick Nagel, whose slick, sultry, and highly stylized illustrations of women seemed to hang in every fern-festooned and mirror-and black-accented bachelor pad. Just behind Nagel’s dominance was another artist, Dennis Mukai (a one-time Nagel student), whose own work chronicles the glamour and glitz of this glamorous and glitzy decade. 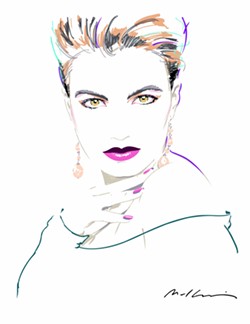 Mukai’s ’80s work appears in a retrospective this Saturday, Feb. 22, at SLO’s Just Looking Gallery from 6 to 9 p.m. New Times spoke to Mukai via phone.

“There’re mainly two versions of work I’m showing: gestural drawings I did as precursors to more finished prints, and the stuff I did for Playboy that does feel like Nagel’s work. I don’t like to reference him—he was my teacher for one semester, but I didn’t learn anything from him. I liked what he was doing, shooting models and creating glamorous images. I was attracted to his lifestyle, which had a real mystique to it.”

While similarities between Nagel and Mukai are readily apparent, Mukai took great strides in differentiating his style from Nagel’s, and his current work is light years from the sort of work he did in the ’80s (see more at dennismukai.com). In fact, Mukai and Nagel were close friends and shared the same publisher.

“I basically went to him for advice about work,” added Mukai, who started publishing in Playboy in the early ’80s. “My original style was in conflict with Nagel’s so he asked me to develop something very different, so I worked very hard to come up with something very unique.”

A lot of the work that will be on display this Saturday was never meant to be seen publicly.

“I would do marker drawings as studies for final canvases, and I turned some into limited-edition prints. These are about 70 drawings in my archives that were just in my drawers. I have hundreds of drawings left over, over the years. Originally, I didn’t want to sell the drawings though my publishers thought I could get good money, but I didn’t think they were final art, so when [Just Looking Gallery owner] Ralph [Gorton] came to me and said, ‘There’s a resurgent interest in your work,’ I said this work is from my past and I’m not interested in resurrecting it, but I decided I would show it as a retrospective. I didn’t really want to bring this back, but I pulled from my drawings, found about 30 Playboy illustrations and 70 studies, 95 percent of which have never been seen by anybody. I thought this would be a unique kind of a show. Ralph’s point was that there was a whole new generation of people to rediscover the work, and some of the people interested in the work in the ’80s didn’t have the money then to buy the work and are jumping at the opportunity to buy it now.”

Mukai will also show cover illustrations he did for the duPont Registry as well as a series he did in collaboration with photographer George Barris, using shots Barris took during Marilyn Monroe’s final photo session before her death.

Don’t miss your chance to see a living legend and to relive the wild and wacky ’80s through the art of Dennis Mukai!