Among a certain set, being a fan of Built to Spill is the symbol of one’s belonging, a sort of secret handshake—“Oh, you’re into Built to Spill? You pass the esoteric test.” Based in Boise, Idaho, the indie rock act was brought together by Treepeople's guitarist-vocalist Doug Martsch in 1992. Martsch intended to have a new set of collaborators for every album he released, and while it didn’t quite turn out that way, the band has remained a purveyor of poignant, quirky, frequently haunting music.

All told, Martsch & Company have released eight studio albums, the most recent being 2009’s There is No Enemy, which was 3-1/2 years in the making. On his website, his wife wrote of the experience, “I watched him work, pouring hour after hour, day after day into writing. Song lyrics were labored over then thrown in the trash, guitar parts revised again (and again). A musician and artist like Doug edits far more than he keeps.”

There’s no denying the lush, rock guitar sounds, mesmerizing rhythms, and ethereal melodies of this act, which could be described as shoe gazing or math rock. Don’t be surprised to see kids in parkas dancing by themselves at Built to Spill shows.

Built to Spill is on a West Coast tour that will take the band from Sacramento to Napa to three nights at Slim’s in San Francisco to SLO Brew on Tuesday, Aug. 19 (8 p.m.; all ages; $25)—with opening acts Slam Dunk and The Warm Hair—and then on to Santa Cruz, Visalia, and L.A. We’re lucky to have them here. Don’t wash your hair for five days, grab your parka, and I’ll see you dancing by yourself in the corner.

SLO Brew kicks off the weekend with reggae act Natural Vibrations on Thursday, Aug. 14 (8 p.m.; all ages; $13 presale or $15 at the door). The Hawaiian band, called Natty Vibes or Da Vibes by their fans, describes themselves as a “wild, sexually explicit, three-ring circus-like, hard-partying, fun-loving, pop/rock/reggae band.”

Country fans will want to check out Aaron Watson on Friday, Aug. 15 (7:30 p.m.; 18-and-over; $14 presale or $16 at the door), whose 12-year career he described as having “Jesus on one shoulder and the ghost of Waylon Jennings on the other.” His most recent album, Real Good Time, was inspired by the tragic death of his newborn daughter: “I thought the last thing I want to do is make music, to get up there and sing,” he said in press materials. “So I said, ‘God, I don’t think I can do this. If music is what you need me to do, then I need some help. Because I can’t write a song to save my life.’ And over the next month I wrote a record like it was no big deal—and I think it’s my best one yet.” This is some great Texas-style, narrative country music.

If you need your ’80s fix, SLO Brew’s got you covered on Saturday, Aug. 16, when The Police Experience and Strangelove—The Ultimate Depeche Mode Tribute play the club (7:30 p.m.; 21-and-older; $14 presale or $16 at the door). It’s like seeing The Police fronted by Sting and Depeche Mode, but without having to travel back in time. How’s that for convenience? 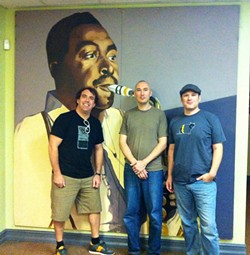 It’s pretty hard to listen to JoE-LeSs ShOe and not feel at least a little bit hip. The jazz act clearly has a sense of humor, as their name references Shoeless Joe Jackson, the infamous MLB outfielder tied to the 1919 Chicago White Sox scandal. Their 2007 self-titled debut introduced the jazz trio to the world. Then, they took their music into somewhat-outside-the-box jazz territory with Outsole in 2010. Their new one, due out next month, is called Midsole. See? They got the funny!

I’m listening to Outsole as I type, and it’s a surprising album. If you think you know where they’re going next, you’re wrong! This is jazz that can appeal to jazz lovers but also lovers of eclectic world music, pop, and quirky instrumentals.

The L.A.-based trio is led by drummer/composer/bandleader Jason Harnell, features Matt Otto on tenor saxophone, and Jamie Rosenn on guitar, and they’ve been together a whopping 12 years! 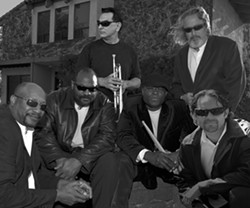 When I think of Urban 805, I mostly think of smooth jazz, and trust me, if you like your jazz smooth, listening to these guys is like petting a baby seal. But the local contemporary jazz act can also stretch out into funk, rock, reggae, and soul.

The group features studio musicians who decided to get together and jam, and then discovered they were freaking awesome together. They don’t play a lot of local shows, but when they do, they’re worth the trip.

This Wednesday, Aug. 20, the sextet plays the outdoor concert series at Black Lake Golf Resort (5 p.m.; all ages; bring a low-back chair or blanket). No outside food or beverages are allowed, but drinks and barbecue will be available.

The Black Resonators, a trio recently back from traveling through Europe playing music in the streets and stages of the old world, play Thursday, Aug. 14, at Linnaea’s Café from 7 to 9 p.m.  Featuring Nathan Rivera, Shine Delphi, and Jessie Andra Smith, the trio performed their original gypsy blues music for Fête de la Musique in Paris, France, and Nathan and Shine performed at the Festival de Blues in Barcelona, Spain. Their fusion of gypsy jazz and blues music is played on National Reso-Phonic guitars, made locally in San Luis Obispo. Add in an accordion and some harmonica, and there you have it! 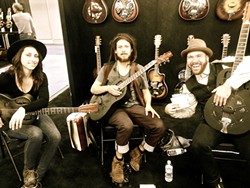 Truth About Seafood hits Concerts in the Plaza this Friday, Aug. 15, from 5:30 to 7:30 p.m. “One thing for sure, these Central Coast hometown gents know how to rock,” they wrote to me in an email. “But what happens in between the rockness is what makes this show a ‘not to miss’ event. Their unpredictable performances have featured dancing dogs, earthworm races, wedding proposals, women’s arm wrestling, and levitating ponies. Many remember this band as the local favorites who opened up for Stone Temple Pilots in Avila Beach. Whether you were there or not, this is one Friday concert you don’t want to miss.”

SLOfolks is bringing three touring favorites back to the area this weekend when Steel string virtuoso Peppino D’Agostino  is joined by special guests Frank Martin and Aleza D’Agostino for two shows: Friday, Aug. 15, at Coalesce Bookstore (7 p.m.; $22; 772-2880); or Saturday, Aug. 16, at Castoro Cellars (7 p.m.; $22; 238-0725). You can purchase tickets in advance for the Castoro show at Boo Boo Records (a service charge will be applied), and a 6 p.m. catered dinner by Giussepe’s Cucina Italiana will be available for an additional charge. Three great guitarists all on the same stage? You know the sparks will fly!

Oakland’s Jimbo Scott will deliver his original brand of soulful folk this Saturday, Aug. 16, at Linnaea’s Café at 8 p.m. as well as play this Sunday, Aug. 17, at Sculpterra’s Songwriters at Play singer-songwriter showcase from 1 to 4 p.m., where he’ll be one of several performers. You may have heard his music on The Krush 92.5 FM.

National touring duo The Littlest Birds (David Huebner on cello and Sharon Martinson on banjo) return to the area this Sunday, Aug. 17, at The Pour House from 5 to 8 .m. “The combination of instruments and voices is unusual and yet perfectly balanced, lending an altogether new sound to even the most traditional of old time Americana tunes,” according to their bio. I checked out their video for “Two Dollar Bill” and it was some real down home fun. They have a new live album called Live & Lucky that’s been getting some good press.

Frog and Peach hosts The Long Black Veils this Wednesday, Aug. 20 (10 p.m.; 21-and-older; free). This is a band that never meant to be a band. Singer-songwriter, guitarist, and harmonica player Rob Avalos was just trying to record a personal album in memory of a friend, but when he got together with Johnny Serpa (drums) and Robbie Weeks (bass), the magic happened.