A dozen candidates have filed papers to run for the San Luis Obispo City Council this fall. The pandemic-backdropped race will feature two incumbents, a former mayor, and an eclectic mix of both familiar faces and newcomers to local politics.

Three seats are open—Mayor Heidi Harmon and Councilmember Andy Pease are seeking reelection, while Councilmember Aaron Gomez has opted not run for a second term.

Residents who've run before are jumping in, such as Don Hendrick, a repeat mayoral candidate known for his unconventional public comments at meetings; Jeff Specht, a city government critic who called for the firing of the city manager in his City Council campaign statement; and Jan Marx, SLO's mayor from 2010 to 2016, who's now running for a council seat.

"I'm not trying to turn back the clock," Marx told New Times about her candidacy. "I feel like I could help. The city is facing a very difficult few years ahead with the pandemic, the economic collapse, and the civil unrest. I feel that the City Council needs someone who can offer experience, expertise, and a track record of understanding policies that go way back." 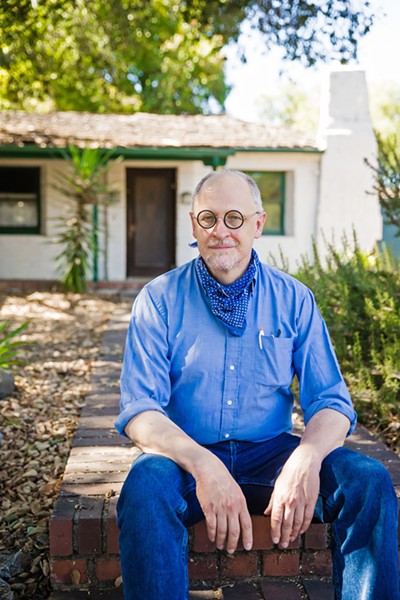 Others are first-time candidates, like Robin Wolf, a restaurant manager and activist propelled by COVID-19 and the Black Lives Matter movement; Erik Long, a former political science professor; Abrianna Torres, a young professional seeking more "diversity of thought" on the council; Kelly Evans, an event coordinator; and James Papp, an architectural historian who was recently ousted from the city's Cultural Heritage Committee (CHC) after he clashed with developers and council members.

"I did exactly my job," Papp said about his recent dust-up over a proposed project on Chorro Street downtown. "This town went to a huge amount of effort to develop rules, laws, and guidelines [for development]—and the people at the very top seem to think it's impossible to have development that actually follows the rules. And it isn't."

Candidates running against Harmon for mayor include Cherisse Sweeney, owner of the downtown store Basalt Interior, who's voiced concerns about how the pandemic and protests are hurting businesses; and Sandra Marshall-Eminger, a longtime environmental activist.

With COVID-19 roiling the economy, and as the local Black Lives Matter movement has reached a peak after the arrest of protest leader Tianna Arata, several candidates said they felt compelled to step up and run for office at a time of crisis.

"The decision that this is the year for me has a lot to do with the immediacy of the issues we're facing," said Wolf, who's participated in local protests against police brutality. "I feel like we're living in the midst of a national racial reckoning right now. We're faced with an opportunity to acknowledge and examine these longstanding inequities and injustices we have, and work toward actual change."

As the manager of The Hatch in Paso Robles, Wolf added that she's seen firsthand the economic effects of COVID-19 and believes she could bring that experience into public office.

Other candidates spoke from a similar economic vantage point, like Torres, who's a small-business consultant.

"The consensus here in SLO is that business owners have not been supported, and they're wondering, 'OK what's next? What's the plan?'" Torres told New Times. "I think SLO has dropped the ball."

Since she joined the race, Torres said she's faced racial stereotypes and double standards from some community members. As both a Black woman and the daughter of a SLO County Sheriff's Office correctional deputy, Torres has offered her "full support" for law enforcement while also noting that "to my core, I stand against racism and bigotry."

But in a recent Instagram post, Torres alleged that she was told by a local protest leader that she was not truly Black.

"I feel like people of color are being put in a box, and that's not fair," Torres told New Times. "There are groups that say they're promoting diversity, and those exact groups are the ones sending out messages that 'Not this one. She's not on our side.' The sides are hurting us."

Papp, the architectural historian, focused his criticism on the city's handling of COVID-19. He said the City Council should have issued a mask order early on, and in general it was too reactive to the crisis. It's a trait that defines the council, he said—"symbolism over substance."

"I think part of the reason the pandemic response has been so lame, so slow, so uncreative is that we don't have a City Council that thinks deeply about these issues or is used to taking action," Papp said. "We need to come back to a 'can-do' era in this city."

Marshall-Eminger said she wants to inject positivity and unity into the race as a mayoral candidate and is in favor of taking a pause on development.

"I want to have more conversation with the community to do what the people want—not what developers want," she said. "We need to think about it. I don't know if we're going to see open space if we keep building."

Long, who taught political science at Cal Poly and most recently at College of the Canyons, told New Times he's running on the idea of hosting summits to address the three most discussed issues in SLO: housing, parking, and homelessness. The summits, he said, would bring together regional, state, and international experts.

"Summits are usually very effective," he said. "Maybe there's a different or better way to address these issues." Δ