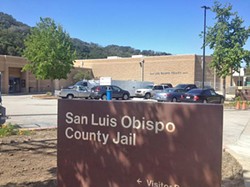 Portions of jail security camera footage released March 16 by the SLO Tribune spurred public protests and raised more questions about the circumstances surrounding Holland's death in the SLO County Jail. SLO County Sheriff Ian Parkinson has recently been answering some of those questions publicly in interviews with local media outlets. But members of Holland's family claim that some of what Parkinson has been telling the public differs from what they were told after Andrew's Jan. 22, 2017, death in the jail.

Part of that dispute involves Parkinson's statements about who made the call to place Holland in a restraint chair and keep him there for nearly two days. In a March 28 interview with local television station KSBY, Parkinson said that he didn't make that decision, a claim he repeated in an April 2 interview with New Times.

"I have never in my 7 1/2 years [as sheriff] directed anybody to be restrained in any way," Parkinson said.

But J. Tavener "Tave" Holland, Andrew's cousin and the Hollands' family lawyer, said that Parkinson told him the opposite during a four-hour meeting in March of 2017. While the meeting was not recorded, Tave said he wrote down what he remembered about the conversation shortly after the meeting took place, later turning it into a written memo to Paula Canny, an attorney who represented the Holland family.

According to that memo, Parkinson allegedly said that "at all times" he had the ultimate call on Andrew's placement in the chair, continued restraint, and the decision to release him.

"He said he made the call to put Andrew in," Tave told New Times.

"I don't know where that would have come from," Parkinson said.

The sheriff said the first time he knew specifics about Andrew's situation was when he was notified of the inmate's death on Jan. 22.

However, Tave's memo states that Parkinson allegedly said that he'd gotten a call about Andrew being placed into the chair on a Friday. That would have been Jan. 20, 2017, two days prior to the death. Tave said that the sheriff told him that he had received the call while attending a meeting or rehearsal for a musical charity benefit for the Women's Shelter of San Luis Obispo. Parkinson told New Times that rehearsals for the event had not started at that time, and said that he was at a private reception related to the shelter on Jan. 22, when he was notified of Andrew's death. New Times couldn't verify the details of the event's rehearsal schedule.

"I don't know where those two got mixed up, but that is absolutely not accurate," Parkinson said.

Tave stood by the statements in his memo.

"So that's not a misunderstanding," he said. "That's [Parkinson] changing the story."

Tave added that he made the same statements about what Parkinson reportedly said during the March meeting in an official interview with the FBI, which is conducting an investigation into possible civil rights violations at the jail.

"As an attorney, I am well aware of the kind of trouble you can get into by lying to FBI," he said. "It's not something you do."

A clearer picture of what actually happened in the days leading up to and immediately after Holland's death might be established by records of communications between the sheriff, his staff, and the SLO County's health agency, which was in charge of inmate mental and medical care at the time. But those records aren't completely available to the public.

In November 2017, Tave made an oral request for any and all communications between the sheriff, the jail, and the public health agency made between Jan. 20 and Jan. 23, 2017. The county acknowledged the request in a Dec. 14, 2017, letter obtained by New Times.

The records the county responded with showed little communication between Parkinson, the jail, and county mental health during and after Andrew's stay in the chair. The response contained no phone records or text messages. It did show emails between jail and mental health staff indicating that Parkinson requested information about individuals charged with misdemeanors found mentally incompetent to stand trial and the number of days they'd been waiting for a transfer from the jail to the county's psychiatric health facility. Those emails were dated Jan. 23, 2017, the day after Andrew's death. At time of his death, Andrew had been found incompetent to stand trial and had been waiting for a transfer.

In the Dec. 14 response, County Counsel Rita Neal wrote that two communications had been held back from disclosure. One occurred the day after Andrew's death. The other occurred the day he was placed in the chair. Neal wrote they were kept from disclosure under a legal exemption that covers material that "may reflect the mental processes by which a government decision was reached."

Parkinson acknowledged that public trust in the department had been hurt by Holland's death and the subsequent release of the video.

"I haven't heard anybody that frankly doesn't believe that there's a broken system or [a] mental health system in dire straits, in need of significant repair," he said. "My job, my responsibility, is to do everything humanly possible to repair that system. And that is where I think the public trust with those individuals will be restored."

Parkinson is currently running for re-election against local private investigator Greg Clayton, who's made the Holland case the centerpiece of his campaign and has received $25,000 in funding from the Holland family. Δ