Wine Country Theatre's production of Other
Desert Cities shows through March 31 at the
Park Ballroom in Paso Robles. Tickets are $15 for
students, $20 for groups of eight or more, and $25
for general admission. Visit winecountrytheatre.com
for more information.

Every family has one.

That big, unspeakable thing that if not fastidiously ignored might just blow every complicated, nuanced familial tie up in smoke.

It's uncomfortable, but oh so real, and Wine Country Theatre in Paso Robles manages to bring all of those sensibilities to its current production of the contemporary drama Other Desert Cities. 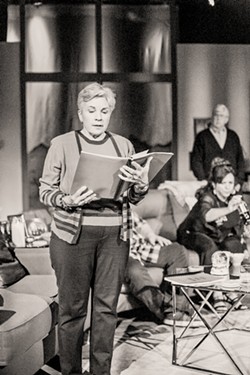 Written by playwright/screenwriter Jon Robin Baitz (Stonewall), this Broadway play debuted in 2011 and digs deep into a Hollywood family's dark past a few years after the 9/11 terrorist attacks on the Twin Towers in New York.

The whole thing takes place in the Wyeth family room and essentially boils down to five people talking (and sometimes avoiding talking) to each other. But it is a masterful work of love, secrecy, tension, and the trauma of one family that director Elaine Fournier (acting and directing credits include The Great American Melodrama, Cuesta College Theatre, and the Pioneer Players) has woven together.

Boiling underneath the surface of chitchat about where to eat dinner is a barely scabbed over wound. Years ago, the family's oldest son, Henry, got involved with a radicalized group. He may or may not have been involved with planting a bomb that led to the death of an innocent man. Henry's body was never found, though he is assumed to be dead.

Brooke, who moved all the way to the East Coast to get away from everything, has struggled with depression since the death of her older brother. In an attempt to grapple with that, she's written a memoir about her Hollywood family and what led to Henry going astray. This revelation leads to some truths about love, blame, and perception and ultimately unburies yet another family secret.

At the heart of the story are many universal questions, one of which Trip brings up when his sister refuses to see the family's issues with her memoir.

"What do you want?" Trip asks Brooke. "For me to say 'Oh boy sis—sure—art comes before life?'"

It's hard to look away from start to finish, thanks in no small part to standout performances from the entire cast. Miller is relatable in her pain and search to find meaning in her brother's seemingly senseless death. Larsen adeptly shows the struggle of the peacemaker in the family who is trying and failing at keeping everyone together. Laird and Maloof both walk a fine line between tightly wound parents who don't see the world the same way that their kids do and trying to love them anyway. And Anthony is delightful as she slips between the alcoholic aunt on the edge and sage family truth teller. Δ

Arts Editor Ryah Cooley is staying out of the family drama at rcooley@newtimesslo.com.