Lost in Yonkers will show at the SLO Repertory
Theatre through May 20. Tickets range from $20 to $35.
Visit slorep.org for more information.

"All happy families are alike; each unhappy family is unhappy in its own way," Leo Tolstoy famously wrote in Anna Karenina. But I don't think that's quite right. Look hard enough and you'll find a common frayed thread marked by distance and pain running throughout the unhappy ones, too, like in the Pulitzer Prize winning play, Lost in Yonkers, currently onstage at the San Luis Obispo Repertory Theatre. 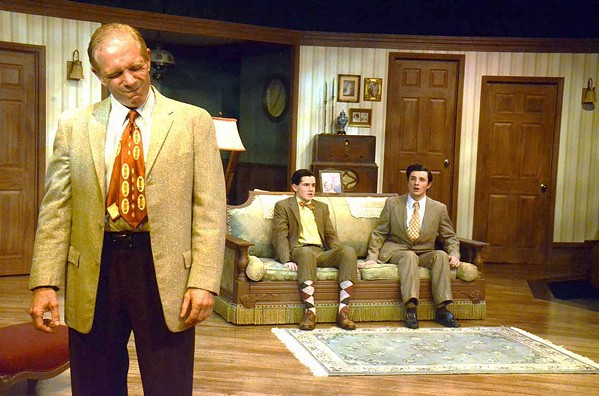 Written by Neil Simon (The Odd Couple, Brighton Beach Memoirs), this production is helmed by longtime SLO Repertory Theatre director Suzy Newman (also the newly appointed capital campaign director for the theater's proposed new building) and tells the story of one family's journey through pain and distance. Eddie (Gregg Wolff, When The Rain Stops Falling) brings his two sons, Jay and Arty (played by sibling duo Elliot and Phineas Peters, previously see in Our Town), to live with his stern German mother (Patty Thayer, the theater's communications and development director) and his developmentally challenged sister Bella (Kerry DiMaggio, education director) in Yonkers, New York, in 1942 so he can work as a traveling salesman for a year to pay off debt he incurred while caring for his dying wife. We also meet Eddie's other siblings, Louie (Mike Fiore, The Nerd), who works as a "bag man" for some local gangsters, and Gert (Jackie Hildebrand, The Producers), who is so nervous around their mom that she frequently takes in a little too much air while talking.

The entire play takes place in the living room of Grandma's apartment. The boys don't want to be there and their grandma doesn't want them either, but she relents after an outburst from Bella. Having fled Nazi persecution in Germany by maintaining a stiff upper lip, this matriarch tried to instill a similar "suck it up" attitude in her children but went a bit too far. Thayer is wonderful as a relic from the old world who wants to keep her people safe by making them strong, but she breaks them a little in the process. She charmingly plays a German grandmother right down to referring to her grandsons as "Yakob and Artur," and accusing them of stealing pretzels in her shop, when she knows full well her customers bought them. Elliot and Phineas Peters are convincing as brothers since they are really brothers, with Phineas playing the clueless, joking little brother to Eliot's young adult, looking for ways to fix his dad's financial problems.

In spite of being "a child" mentally, as Grandma puts it, Bella longs for more in life than working for her mom and strikes up a romance with a movie theater usher who can't read. Kerry embodies the tension Bella feels being forever caught between childhood and womanhood. Hildebrand's intermittent appearances as Gert show a daughter who has chosen to stay away from her fraught family dynamics. Outside of Grandma and Bella, the boys share the most stage time with Louie, who Fiore plays simultaneously as a slick, tough gangster and a compassionate uncle who gets what his nephews are going through.

Lost in Yonkers is described as a memory play, and it's just that—a memory of people who love each other struggling to figure out how to show it to one another. Δ

Arts Editor Ryah Cooley is sitting in the back row at rcooley@newtimesslo.com.