Family works together in Heart of the Matter art show

The Heart of the Matter art show, featuring work by Leviticus Sullivan, Page Graeber, and others, will be on display at Studios on the Park in Paso Robles through Feb. 27. Visit studiosonthepark.org for more information.

Leviticus Sullivan is an award-winning painter, but he's only been painting for a few months, with just one hand.

The 32-year-old artist has cerebral palsy and is used to playing—and winning—his favorite video games, like Soul Calibur VI, but it wasn't until his grandmother, former president of the Paso Robles Art Association Page Graeber, suggested he look into another creative outlet that he gave painting a try. His first painting, Identity Krisis, won second place in his debut show.

Both Graeber's and Sullivan's work is currently on display at Studios on the Park in Paso Robles as part of the Heart of the Matter show. The exhibit focuses on the vision, creativity, soul, and core behind the art.

"I told Levi, 'You have such a good imagination, why don't you come to art club and put it on paper?'" Graeber said.

While Sullivan is new to painting, he isn't new to the creative process. As a member of the Adventure Club in San Luis Obispo, which brings together adults with learning, developmental, and physical disabilities, Sullivan regularly works as an actor and behind the scenes on the group's movie projects. He's also drawn in pen and ink for most of his life, depicting fantasy and science elements like dragons and how they breathe fire.

‘For me the Heart of the Matter kind of pulls me in different directions. I don’t know if I should be feeling one way or the other.’ —Leviticus Sullivan, artist tweet this

In his art lessons with his grandmother, the two focus on techniques like design, color, composition, and shading and then work quietly together on their own pieces. 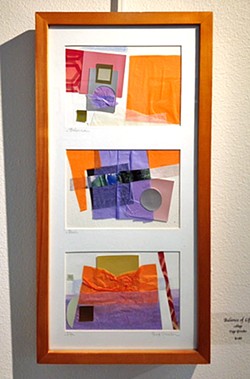 Sullivan's Identity Krisis started out as a pen and ink piece that he later added acrylic paints to. The piece features three figures: In the center is Sullivan, to the left is his guardian angel, and to the right is an imaginary friend.

"For me the Heart of the Matter kind of pulls me in different directions," Sullivan said. "I don't know if I should be feeling one way or the other."

"I think everyone has a balance in their life," Graeber said. "Sometimes they get off balance and need to be centered. Sometimes they need to try new things and find they can do it."

Sullivan describes his work as a mixture of who he's been, who he's going to be, and a little pain. He hopes his art will cause viewers to take a beat and consider what's before them.