Popular culture tells us your blood can leave your body for a handful of reasons. For example: It could be sucked out by a thirsty vampire.

Another option: You could volunteer to give your blood willingly and receive a pair of vampire fangs in return. Sound like a good deal? Scarecrow Vampire Fangs and United Blood Services are teaming up for Bloody Good Deed for Halloween, a blood drive on Oct. 29. Everyone who donates blood will be handed a free pair of the infamous Scarecrow fangs that are taking the underworld by storm. 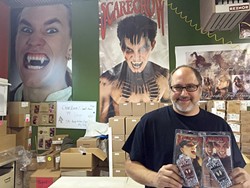 “There wasn’t anything like this,” Goldiner said. “These custom fangs [for the costume shop] were selling for $150 in 1990.”

Goldiner experimented and came up with his own creation; instead of time-consuming specific custom fit fangs, he invented a generic cap that could be easily molded to any person who purchased the kit. He made the move from New York to Boulder, Colo., to start Scarecrow Vampire Fangs, settling on the Central Coast in 1994. Now, Grover Beach is home to a warehouse full of fangs.

“I patented it, created a business around it, and have been making vampire fangs for over 22 years,” Goldiner said.

The immensely popular fangs are different from many mainstream tooth-filled mouthpieces because the package comes with two individual caps to go over the two front eye teeth, which are typically where fangs go. The international span of Scarecrow fang enthusiasts makes it the largest vampire fang company in the world, selling to more than 28 countries outside the U.S.

“It really is a specific niche market,” Goldiner said with a laugh.

While learning about the costumed world in New York, Goldiner was also receiving a degree in sociology, and now not only teaches sociology and criminology at Cuesta College, but is an expert in the sharp-teeth department as well. Goldiner was the “fang tech” for Cuesta’s Dracula performance last year—Scarecrow supplied fangs, and he supplied fang knowledge—as well as for other performances in SLO County.

Every component of the vampire fangs, including packaging, is made entirely in the United States. In the company’s first years, Goldiner was reminded daily of the authenticity of its domestic origins.

Now those little fangs are made with injection molds. And, due to his intimate experience with the product, Goldiner can tell when his fangs make public appearances. Scarecrow Vampire Fangs have been used in America’s Next Top Model, Dancing with the Stars, and more. According to Goldiner, CSI reached out to Scarecrow to work with them on providing fangs, but all the others received Scarecrow fangs indirectly, because it’s a wholesale manufacturer.

“I was just watching Unbreakable Kimmy Schmidt, and I saw my fangs!” Goldiner said. “[Seeing that] was gratifying and a bit exciting to have this connection to what I was watching.”

As Scarecrow does not sell directly to consumers, there are only a few local stores that stock the product. Costume Capers was a retailer, and Let’s Party in SLO will carry on the torch. Of course, if you’re feeling extra vampiric, the upcoming blood drive offers direct access to these famous fangs, just in time for Halloween.

“It’s nice to be involved in the community and to give back as well,” Goldiner said.