A toast to the individuals and organizations that entertained, enlightened, and questioned

Whatever your personal take on 2008 might be, there’s no denying that it was chock full of singing, dancing, acting, painting, writing, filming, hula hooping, and just about any other creative endeavor that haunts the recesses of your imagination. Unless you didn’t make an effort to attend any local exhibits, shows, or concerts, in which case, I hope your relationship with your television is satisfying. Philistine.

But if you did happen to make the gallery rounds or pack the theater seats, here’s an overview of 2008 in art, with which to reminisce. And, perhaps—hopefully, dare I say?—inspire you to seek out more art in the coming year.

*In May the Central Coast Shakespeare Festival received word that Bellevue Charter School, its home of more than five years, was terminating the relationship, rendering the festival homeless a mere two months before opening night in July. The festival’s Artistic Director, Zoe Saba, decided to cancel the summer’s festival, and announced in December that the festival will relocate to River Oaks Hot Springs in 2009.

*In September Cal Poly Arts introduced Steven Lerian as its new director. He officially stepped into the role on Oct. 31, replacing Cal Poly Arts Program Manager Peter Wilt, who had been serving as Interim Director since 2006. 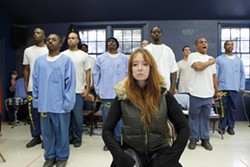