The arts community reflects: Without the Compact Gallery, whatever shall we do? 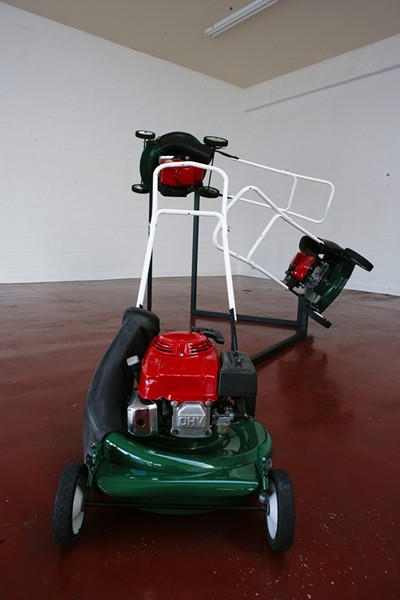 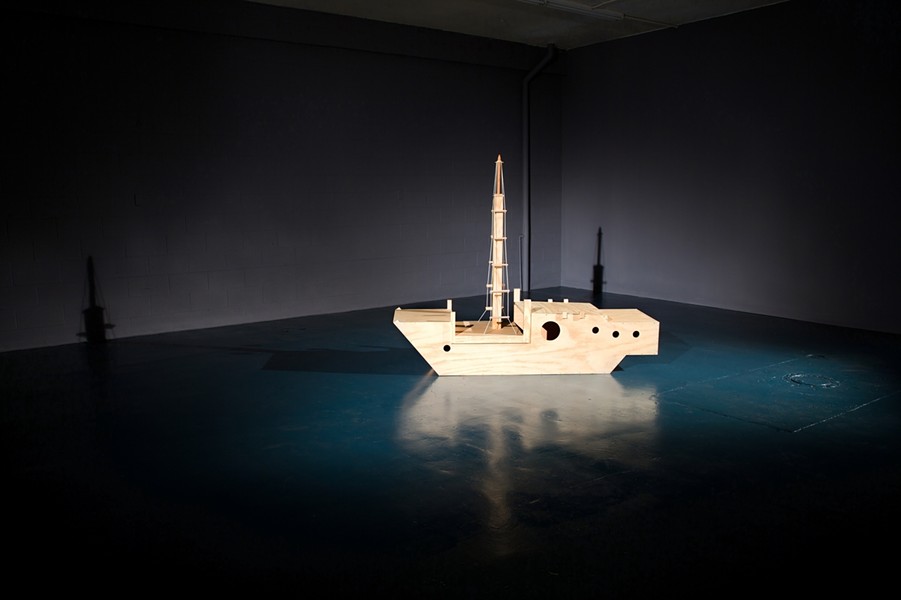 PHOTO BY STEVE E. MILLER ADRIFT : The Start of a Gauntlet of Beings, an installation by Euan Macdonald and Kevin Hanley, was an eerily beautiful piece that was best viewed after dark.

Over the past few years, Compact Gallery has been quietly showing groundbreaking, strange, uncomfortable, and lovely art in San Luis Obispo. The gallery was the kind of place one could walk into, month after month, and never be quite prepared for the experience that awaited the senses on the other side of its smoked glass doors. Perhaps there would be a show of paintings by Daniel Dove, or perhaps an installation of three lawnmowers welded together. Perhaps the room would be pitch dark save for an eerily glowing boat, in whose ghostly presence viewers’ chatter was reduced to reverent whispers. Compact was the exact opposite of most local art galleries: placing great emphasis on site-specific works—often drastically altering the space with every new exhibit—while caring very little about the marketing of saleable objects. So it sucked when, on Saturday, March 31, the gallery officially closed its doors.

“After some careful thought, I’ve decided to shut down Compact,” owner Jeff Jamieson explained in a simple e-mail to the gallery’s followers. “In a few years I’ll get the itch again and Compact 3.0 will rise.”

Jamieson, an artist and furniture craftsman who currently teaches sculpture at Cal Poly, opened Compact in 2003 as a group effort with several colleagues, among them artists and art teachers Rupert Deese and Dave Prochaska. In its first incarnation, the gallery was located in the SLO Creamery and functioned as an art collective of sorts. After a run of several years, the gallery closed down. Then, in the summer of 2010, Jamieson reopened Compact at its unobtrusive 1166 Higuera St. location. Situated just outside of downtown San Luis Obispo, the odd little building was an appropriate place to house an art gallery that operated just outside the radar of many local residents, and just outside the collective comfort zone of a rather conservative arts community. But this is precisely where Jamieson wants to be.

In 1984, after he graduated from the San Francisco Art Institute, Jamieson moved to New York City, where he pursued his own art in addition to working as a furniture fabricator for the artist Donald Judd. After 10 years in New York, Jamieson relocated to San Luis Obispo, seeking a better environment for his children. In Compact, perhaps, Jamieson found a way to recreate—and share with the community—a slice of the contemporary art scene he’d left behind.

“The work was conceptually based,” said Prochaska, who continued working with Jamieson after the gallery reopened. “That ruffles the feathers of those in San Luis Obispo, where they want to see paintings of mountains.”

“I would say it was even more contemporary than we were,” said Jeff Van Kleeck, referring to the Cal Poly University Art Gallery, where he works as gallery coordinator.

“What’s funny about that space is you couldn’t find a worse environment to show art in,” Van Kleeck continued, citing the building’s unfortunate fluorescent lighting and cement walls.

But during the day, sunlight streaming in, the gallery was a thing of beauty. Jamieson once held a reception in the middle of the afternoon in order to take better advantage of this.

Compact exhibits included “The Start of a Gauntlet of Beings,” the aforementioned glowing boat installation, a collaborative effort by Kevin Hanley and Euan Macdonald; “Six Decades of Stoneware,” a retrospective of the work of ceramicist Rupert Deese, Sr.—father of the aforementioned Rupert Deese—and “Double Flat,” the geometric paintings of German artist Mai Braun.

“The shows were a mixture of younger and older artists, local and national artists,” Braun recalled. “There was an openness and generosity in his vision for the space that I really liked.

In addition to nationally known artists, Compact also showcased the work of well-established locals, such as prints by Leslie Sutcliffe and paintings by Daniel Dove.

Then there was a show of photographs by Steven Boothe, a computer technician at Cuesta College who discovered Compact at a time when he’d only recently developed a serious interest in art.

“It was instantly a place of my admiration,” Boothe recalled of the gallery. “I saw it as a central hub of the community.”

He introduced himself to Jamieson as someone interested in joining the artistic community, bringing along a collection of experimental photos he had taken. To his surprise, the gallery owner took an interest and worked with Boothe to develop the beautiful installation “More Than Watching.” It was Boothe’s first art show.

That Compact would take a chance on a promising unknown spoke to the gallery’s unique ability to be intellectual without being elitist—and to the rare freedom its owner enjoyed to do what he wanted with no intention of making money. The gallery’s expenses were purely out of pocket.

“What differentiated Compact … was the sense that it was there to nourish the public, not to attract customers,” noted Eric Greening, who, like Boothe, was one of the gallery’s regular attendees. “Its very existence seemed to serve as an example that community could be built around sharing rather than commerce.”

“It’s pretty rare to come across something like Compact,” Jeff Kopie, an artist who worked for Judd alongside Jamieson in New York, wrote in an e-mail. “I think his programming was pretty sophisticated and pretty challenging. Doing something like that, without the real possibility of making money at it, takes a lot of passion and skill.”

But such projects take a toll, even on the most passionate, and Compact has vanished again. Fortunately, the thing many people considered the best part of its existence—the conversations it inspired—can still be had, though it will be hard to find more stimulating topics of discussion than those the gallery provided.

“The most compelling, the most interesting—what brought me back, and left a mark on me, from exhibition to exhibition—were the conversations I had,” Boothe said. “I never walked away unchanged.”

Arts Editor Anna Weltner is a different person. Contact her at aweltner@newtimesslo.com.