Steven R. See, music impresario, heads to the big concert in the sky

Steven R. See was a rascal, a raconteur, and a music junkie with a real bad habit, a habit so bad, in fact, that he spent his whole adult life squandering what little money he had to pump that sweet sounding juice into the veins of fellow Central Coast music lovers. He passed away a couple weeks ago after a battle with cancer.

Like plenty of SLOhemians, he arrived here thanks to Cal Poly. It was 1973, and the then-college kid quickly joined Cal Poly’s ASI Concert Committee. The next year he was elected chairman and brought John Fahey, folk legend John Stewart, and Journey (on their third gig ever!) to perform that summer, but he got his concert promoter start before that.

“I started out in the mid-‘60s charging the neighborhood kids a nickel to watch my brothers lip-synch to Beatle records,” he told me last year during an interview for Soundcheck magazine.

For the last several decades, Steve has run the wildly popular, financially useless Hoot Road Show. More often that not, he lost money bringing music to the area. He didn’t care. He loved to see great live music himself, he loved to watch the faces in the crowd as they lost themselves in the concerts, and he loved to make the musicians happy, paying them more than he could afford.

“I’ve been lucky enough to have had my hand in some rather remarkable bookings over the past 35 years,” he said last year. “My longtime friend Dennis Koda and I brought the Jerry Garcia Band to the Pismo Theater in the late-‘70s. We made a pact while eating lunch on campus one sunny afternoon that we’d do whatever it took to bring Garcia to town. That was a pretty amazing process. You can still stand on the very stage where Jerry once stood while ordering a hamburger.

“There was a series of concerts at the Great American Melodrama in the late-‘70s that featured The Dillards, Jim Ringer, Mary McCaslin, and the Byron Berline Band. Byron had a then-19-year-old Vince Gill playing guitar that night. The crowd was in musical awe. I worked with the talented Dr. Warren Balfour on bringing the Ray Charles Orchestra to Cuesta College in the 1980s that, for a variety of reasons, was not an easy thing to do. We used every trick in the book to pull it together. That concert sold out.

“My favorite was a one-nighter in Baywood Park featuring the late Kate Wolf and the original Cache Valley Drifters. This was in the late-‘70s, tickets were $2.50, and of course we didn’t fill the house. I still miss Kate.

“You certainly aren’t in this racket for the money,” he laughed, something he did frequently. “I’ve been told that I have a fairly good knack for picking good entertainment and my tastes in music run pretty wide and eclectic. I worked my tail off bringing Steve Forbert to town once and couldn’t believe how difficult it was to get 70 people into a small venue for such a talented person. I still remember the day his first album came out while I was working at KZOZ some 30 years back. He gets tremendous airplay on KPIG. I’m still confused about that one.

“We took a chance on Amy LaVere a few years back and had a show with her at the Steynberg. The band had played in front of seven people in Santa Barbara the night before and truly didn’t want to play for us that night. As it turned out, we filled up the joint, the band went to that special place that bands sometimes go, and the crowd loved it. There was a really strong standing ovation at the end of the first set and it was the first standing ovation that they had ever received.

“There was a concert we did in Cambria at the Painted Sky Studios with singer-songwriter Darryl Purpose. He was singing a song about a sister he never really knew that had tragically drowned in a pool at the age of two. Darryl’s singing this heartfelt song about leaving flowers at her grave and I look up to see everybody in the crowd with tears streaming down their cheeks. That was intense. Darryl has that kind of power with his music and I’m a huge fan.

“This whole concert scene in San Luis has really changed over the last 40 years. There’s more for the people to choose from right now than ever before. We truly have a much more vibrant music scene here than in either Santa Cruz or Santa Barbara. We all should be very proud. However, it’s never been more difficult than it is today to actually sustain a break-even level. My concerts are always in smaller, more intimate settings. The words and music really matter to me and you need to be able to connect with the performers in order to really appreciate the entire experience. Lately, attendance is down for everybody who’s presenting concerts but I’ve still managed to keep the quality of the concerts extremely high and the ticket prices very reasonable. Will I make it to my 36th year of this labor of musical love? Who knows? I hope so.”

Sonnie Brown, host of KCBX’s Song Town, will be emceeing the event, which features progressive bluegrass legends, Grammy-nominated The Greencards, who “draw from a wide variety of musical influences, ranging from Bob Dylan and the Beatles to the Celtic tone of Irish traditional music, gypsy themes, and Latin sounds.”

In case you were planning on going to the May 14 SLOfolks concert with Brian Gore & Scheherazade, they’ve postponed it “in order to invite all of you to celebrate Steve See and his Cambria Hoot Concert Series,” wrote Elisabeth Demongeot of SLOfolks.

Punk juggernauts PK will be on hand for the release of their debut video, “A Night in London,” this Thursday, May 13 at Native Lounge.

The guys are “inviting all to come celebrate life, love, and the survival of the ‘new depression’ by reliving the 1920s in full swing at the ‘A Night in London’ Music Video Premier Party.”

This 7 p.m., all ages show costs $7, and guests are “encouraged to go ‘Great Gatsby’ in attire, for a flapper-tastic night of hors d’oeuvres, door prizes.” Special guests John Miller (of Santa Cruz) and From the Top (of SLO) will provide live music, followed by a closing set featuring the softer side of PK, who’ll perform acoustic.

“We don’t get a chance to do this kind of thing very often. We’re usually more concerned with volume than style but, hey, maybe we’ll clean up nicely,” said PK bassist Mikel Van Kranenburg. “No, I’m not going to be chopping the hair,” he added, snickering.

The song “London” is off the band’s first full length CD released earlier this year, and was shot in one day on an old train at the Sylvester Winery in Paso Robles, but, said the band, “the viewer will see magic, romance, and nostalgia.”

Local fans and friends of the band are featured in the video, making the day’s complicated single-shot, double-time filming techniques “way more fun. To say there were challenges in the editing process is an understatement, but fans will relish and appreciate the hard work from the team and SLO can be proud of their local heroes with this production,” added the band.

“Yeah, it was a bit like doing the 400 meter dash backwards. We were practically sprinting through the train in reverse,” said director Lam Nguyen. 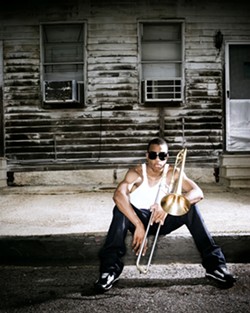 Raw talent—that’s the best way to describe this jazzman whose sound straddles genres as diverse as rock, funk, jazz, hip-hop, and soul, a sound he calls “Supafunkrock!”

Born Troy Andrews, Trombone Shorty is touring in support of Backatown, the locals’ term for the area of New Orleans that includes the Tremé neighborhood in the city’s 6th Ward, where Troy was born and raised—getting his nickname at four years old when he was observed by his older brother James marching in a street parade wielding a trombone twice as long as the kid was high. 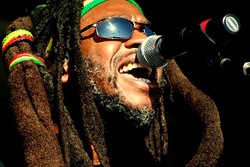 Reggae fans hold onto your dreadlocks, because Fuzion 2010 is about to drop in at Pozo Saloon. On Sunday, May 16, iconic legends Steel Pulse headline a show that also includes Groundation and Orgone (2 p.m.; all ages; $20 presale or $25 at the door).

Of course the big news is Steel Pulse, who have been exploring the many rooms in the house of reggae since they hit the scene in 1975, but when it comes to the message, Steel Pulse has “continued their commitment to fighting injustice, educating the masses, and promoting positive messages through spiritually uplifting music.”

The Grammy Award winners (for their Babylon the Bandit, and nominations for Earth Crisis, Victims, Rastafari Centennial, and Rage & Fury) became the first reggae band ever to perform during the inaugural festivities in Washington D.C., courtesy of Bill Clinton.

Dig the scene at one of the most soulful venues in SLO County.

Gilles Apap and the Transylvanian Mountain Boys hit the Red Barn Community Music Series at South Bay Community Park on Sunday, May 16 at 7 p.m. (pot luck supper at 6; $10 at the door; BYOB and a dish to share). Apap is a virtuoso of gypsy swing, and he’s huge in Europe but chooses to live here, where he finds joy in everything he does, from surfing to performing with world-class orchestras on international stages. The Transylvanian Mountain Boys features Chris Judge (guitar) and Brendan Statom (double bass), and the trio will perform traditional gypsy tunes from Rumania, Bulgaria, and Hungary, along with the 1930s swing sound of Stephane Grappelli and Django Reinhardt, with touches of bluegrass and classical music.

Laurie Lewis & the Right Hands hit Painted Sky Studios on Monday, May 17 (7:30 p.m.; $20; 927-8880). Lewis has been at the forefront of the American folk and bluegrass scene for three decades. The soft-spoken, sweet-singing California fiddler and singer-songwriter is a remarkable performer. Topnotch bluegrass in an intimate setting with spectacular acoustics? Yeah, that’s right. Buy tickets in Cambria at the Business Center and The Yew Tree.

Seattle-based folk rock artist Kris Orlowski hits the Frog and Peach this Monday, May 17 (10 p.m.) as part of a 12-day tour through California to support his new album Happiness is Waiting. “As an independent band without label support, it would be great to have the show mentioned in the New Times.” Done! “Ever had your heart broken? Ever felt like love was the only sensible means of escape? Ever felt paralyzed in the wake of wild emotions? Then you’ll relate to Happiness Is Waiting,” he said.

Nationally touring artists Hunter Paye and Alexa Woodward play Tuesday, May 18, at Steve Key’s Songwriters at Play showcase at the Steynberg Gallery (all ages; 6:30 p.m.; $5). “Woodward’s haunting banjo songs blend her southern roots with the urban folk sounds of Boston and New York,” according to press materials. Paye is “currently preparing for official showcases at The National Folk Alliance in Memphis and then a nationwide tour to release his fourth studio album.”

Glen Starkey knows there’s no cure for birth or death but to enjoy the interval. Contact him at gstarkey@newtimesslo.com.