Hundreds of thousands of Morro Bay’s farmed oysters are growing fat and succulent in a new—and cleaner—part of the estuary, after their earlier home near the mouth of Chorro Creek was closed due to pollution. 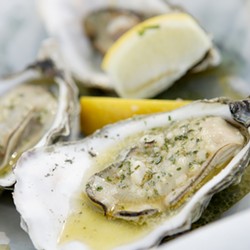 High levels of fecal coliform bacteria turned up in water samples at the oyster farm operated by Tomales Bay Oyster Company near the Morro Bay State Park Marina. When state health officials declared the area off-limits for growing shellfish, oyster farmers were forced to move their floating sacks farther south in the estuary.

“Morro Bay has been a nightmare,” said Drew Alden, the president of Tomales Bay Oyster Company, which started growing oysters in the estuary in 2004.

“It’s been a tough ride. There are a lot of water quality issues in Morro Bay. We just keep getting pushed farther and farther into a corner,” Alden added.

The exact source of the fecal coliform remains murky, but as Lea Brooks of the California Public Health Department noted, “There are many sources of potential contamination: failing septic tanks, wildlife, runoff—and sewage spills.”

Raw sewage from the California Men’s Colony flowed into Chorro Creek in January after an electrical failure at the prison’s new treatment plant. A chlorine spill from CMC three years ago killed 90 percent of the oysters at the Tomales Bay company’s growing area, Alden said.

As filter feeders, oysters can concentrate any disease-causing organisms. Fecal coliform in the water is considered an indicator of the possible presence of pathogens, such as hepatitus or cholera.

Although not native to Morro Bay, Pacific oysters have been grown commercially in the nutrient-rich waters of the estuary for 75 years.

Over at the Williams Shellfish Farms’ oyster beds near the sandspit, the water quality is high and the oysters are healthy. But that area of the estuary has also seen high bacteria levels in the past, identified in a DNA study in 2001 as coming from birds, humans, pets, and cattle.

Since then, some of the pollution sources have been cleaned up, according to Dan Berman, executive director of the Morro Bay National Estuary Program.

“Getting the derelict boats out of Windy Cove, and putting in a better Mutt Mitt program and educating the public about cleaning up after their pets have really helped. Plus there’s been a lot of work upstream to fence the cattle out of the creeks,” Berman said.

In addition, aging sewage lines and a lift station at Morro Bay State Park were recently replaced, he said, and boaters have access to sewage pumpout stations along the city waterfront.

State and local officials met with oyster growers in Morro Bay on July 17 to work on a solution to the water-quality dilemma. They proposed restarting water quality monitoring in former oyster farming areas that are now closed, to see whether they are clean enough to be reopened.

Discussions are continuing about how this sampling and lab work would be funded. Currently, oyster farmers are responsible only for the expense of monitoring the growing areas they actually use.

“The oyster industry is like the canary in the coalmine. This shows we still have work to do. We all enjoy the bay, and we have the responsibility to keep it clean,” said Berman.

Meanwhile, samples of the recently moved oysters were sent off to a state-approved lab on July 21 to see if they are now approved for harvest and human consumption. Alden hopes the shellfish are safe enough to send to the company’s retail market and picnic grounds on the shores of Tomales Bay, north of San Francisco, where families from many diverse cultures barbecue the succulent treats and serve them up with their own special sauces.

He just ordered half a million certified oyster “seed” from Humboldt Bay for the company’s Morro Bay oyster farm.

“I don’t know if we can grow it out and sell it, but you’ve got to order seed if you’re going to farm oysters,” Alden said, adding, “The community needs to take action so the water quality improves. If your canary dies, you need to do something about it.”

Contributor Kathy Johnston may be reached at kjohnston@newtimesslo.com.