As a native Californian, I've heard the sentiment from a lot of people living both in and outside the state over the years. The natural instinct is to protest the claim. Pointing out the cripplingly high cost of living and housing, the near-total lack of public transportation, seasonal floods and fires, and the Kardashians make strong counterpoints to such claims. But deep inside, I know that they are at least partially right. We've got sun, beaches, and amazingly diverse urban cities, as well as great swathes of naturally beautiful wilderness.

Oh yeah. And the food too. 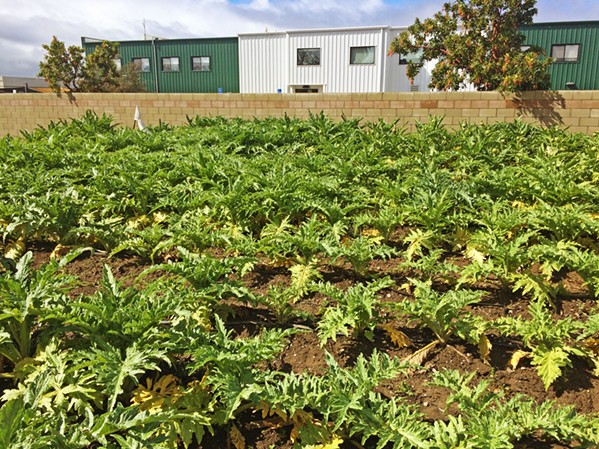 It took me moving out of state and then coming back to truly appreciate how good the food in California is. What kind of food specifically? Literally all of it. Pick a style, flavor, or ingredient, and you can find somewhere in our state where it's served expertly and hailed by patrons or food critics as the best they've ever had.

If you're living on the Central Coast, you know this better than most. From north to south, we've got some of the tastiest bites you can find anywhere. From seafood, to Mexican food, to Chinese food, to barbecue, there's really no way to go wrong when you want to scarf down something truly delicious.

But as good as that food is, it's easy to forget just where it comes from and just how deeply our region is connected to all that great food. This is something I'm reminded of as my fiancée and I pay a visit to the Blosser Urban Garden in Santa Maria.

It's early March, and the Blosser Urban Garden (BUG for short) is a farm and farm stand located at 915 S. Blosser Road. The farm certainly stands out. The old wood stand, large white two-story home, and accompanying farm sit in a semi-commercial and industrial part of the city, flanked by automotive repair shops and a beer distribution company. With its stately house, quaint farm stand, and vibrant green farm, the urban garden stands out like a tiny oasis from its surroundings.

It's our first time visiting the farm stand, and we are greeted by two friendly dogs the moment we step out of the car. They are soon followed by BUG's owner, Jerry Mahoney. He's friendly and chatty as we root through boxes of beautiful produce, selecting artichokes, kale, and some daikon radishes to take home with us.

Before we leave, Jerry is kind enough to give us a tour of the farm, which is a symphony of bright colors and smells, thanks to recent rainfall. I trudge through the damp soil (new sneakers be dammed) as he proudly points out all of the fresh, organically grown produce that would soon be making its way to the stand or the subscription produce boxes that BUG now delivers. We stop by the farm's chicken coop while Mahoney talks with my fiancée about urban gardening.

By the time we leave the stand, it's become clear that Mahoney has a deep passion for local, sustainable, organic farming. Not only am I grateful to have access to such fresh and local food, but also it reminds me of how deeply farming and produce are connected to the area.

Living here, it's easy to drive past the farms and fields of produce or the large herd of cattle grazing, and forget the connection agriculture has to what ends up on our plate when we sit down to one of those amazing meals anywhere on the Central Coast.

Yes, we are spoiled by so much amazing food, but how often do we think about where it comes from, how it's produced, and who and what we support when we eat it. For those, like me, who don't do that very often, getting out to places like BUG is all the more important. Δ

Staff Writer Chris McGuinness is trying to eat more veggies, and can be reached at cmcguinness@newtimesslo.com.