FarmSLO is a new program of Slow Money SLO, a nonprofit established in 2012, whose mission is to support the sustainable growth of small food, farm, ranch, and beverage purveyors to benefit the local food economy and the health of SLO County. The FarmSLO program includes working with San Luis Coastal Unified Food Services and other school food service programs to increase farm buying. For more information on Slow Money and FarmSLO, visit slowmoneyslo.org, or call (805) 300-2805.

In a triple-sized walk-in fridge, I see boxes of gorgeously irregular red, green, and yellow heirloom tomatoes and the few remaining melons from a 100-pound delivery of RobinSong Farms Charleston Grey melons.

This is not a behind-the-scenes tour of SLO Foods Co-op or the inner workings of a posh farm-to-table restaurant in downtown Paso. This fridge belongs to Laguna Middle School, the central kitchen for all of San Luis Coastal school district's cafeterias. 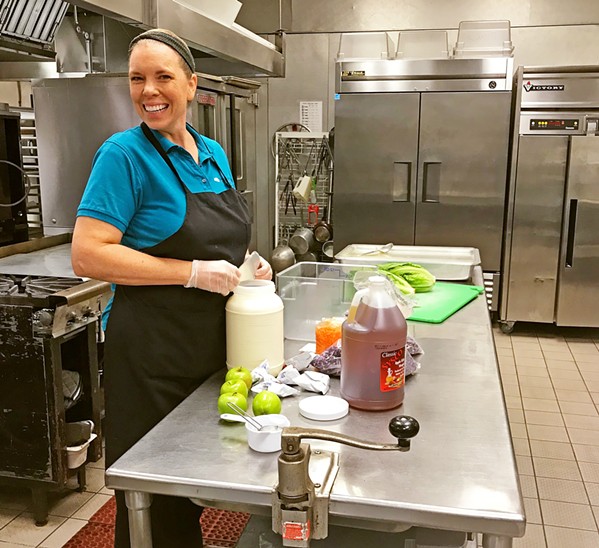 Students not only get to enjoy local tomatoes, melons, and other produce in their school lunches, they get opportunities to talk with the people who grow the food through "meet the farmer" events Primer organizes in school cafeterias.

These are the fruits of the San Luis Coastal Unified School District's labors at the hands of Primer, who became the director of Food Services three years ago. Inspired by the Center for Ecoliteracy to reform school food, Primer not only wanted to make school lunches healthier, but she considered local farmers, ranchers, fishermen, and food purveyors a vital part of the big picture.

Primer is partnering with Jeff Wade, founder/executive director of Slow Money SLO. The nonprofit provides funding for small farms and food purveyors and connects the small farm community to business opportunities. Primer made the decision to bring her school district into the FarmSLO program, which connects schools to Slow Money's big protective hug surrounding Central Coast farms and ranches.

Primer is in charge of providing meals for a district with 7,700 enrolled students at 15 separate food sites, 30 percent of whom qualify for the free and reduced school lunch program. Every meal Primer serves cannot exceed the set meal price of $3.25. Would anyone like to raise their hand to estimate how many healthy food items three bucks can buy in the real world?

Thanks to that national initiative and Primer's know-how, what you won't see at this district's school cafeterias are fried foods and trans fats. What you will see is an opportunity for healthy choices. For instance, Primer just purchased hundreds of pounds of Los Osos-based Kandarian Farms organic grain. Then Primer's team made those ingredients into a carnitas burrito bowl with a side of grain salad, replacing the croutons with a side of toasted farro.

Primer says the kids loved it.

Out back, behind the bike racks, food delivery trucks are pulling up, their sides adorned with big photos of a bright, smiling young lady holding handfuls of sliced oranges.

When an item is organic or local, Primer's interns and food service staff make signs on the lunch line, and children receive regular health and wellness education on ecology, food and sustainability, and systems change straight from the Center for Ecoliteracy playbook.

Her impressive catering background enables her to be right at home in the Laguna Middle School industrial kitchen.

"When I came to school food, I realized so many things are different from the catering world. Budgets are a lot smaller, and plate cost is a lot different. But having that background of high-quality food, local food, amazing food and dining experiences, I didn't understand why that didn't bridge to students," she says, noting that this is the right time to change the school food systems.

"And I saw a lot of opportunity for positive change by having these sorts of values around food and about working with who's around and what is within your local community," Primer says.

Primer and Wade tell me they're working on Lucia Mar District next, and they plan to expand to North County and beyond.

"Look at where we've come from," Primer says. "It's pretty amazing in a short amount of time."

"The work that Jeff [Wade] has done in really wanting to support and promote local farms is incredible," she says. "It's really beyond my grasp."

Wade, who comes from a background of high-tech marketing, sales, and business consulting, says that there's a welcoming culture here for such endeavors.

After he and his wife moved here from Orange County, he says he was glad to learn the SLO community was all about getting locals involved and finding people who share the interest of sustainable farming practices. He has a special place in his heart for helping small farmers and artisan food purveyors thrive.

Primer says she wants to see even more local farms, ranches, and food purveyors walking into the school food arena. She recently sent out a $100,000 pizza bid to the entire county—but the only taker was a large national chain. Maybe with the help of the FarmSLO program, Primer will be seeing more bids from local pizza restaurants

It seems that the right gears are in place to make this happen—since Slow Money SLO began in 2012, the organization has secured 53 lenders, 130 loans, $1.26 million in funding, and has found 26 food system beneficiaries. So keep an eye on what Primer and Wade have going on. Δ