After five months of living with the pandemic, farmworker advocates say that agricultural employees, which the state considers to be essential workers, continue to be vulnerable to COVID-19 infection.

At the start of the pandemic, the main concern was getting enough personal protective equipment for farmworkers and getting local public health information to Spanish and Indigenous-language speakers, but concerns have evolved with the extended length of the crisis. 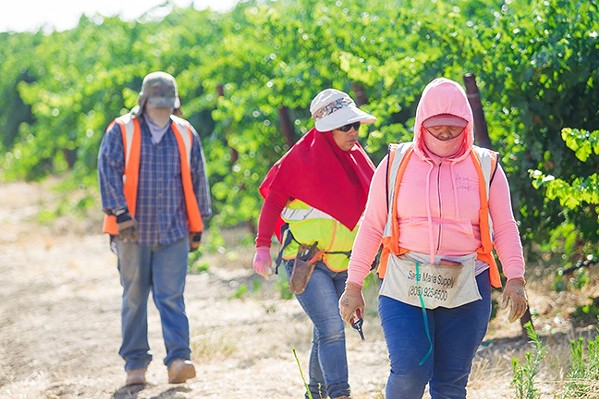 Preliminary findings from a recently released study show that the COVID-19 pandemic has exacerbated existing vulnerabilities farmworker communities endure in their living, working, and health conditions. The study states that farmworkers face additional risks because they lack critical social safety net support that other members of society have access to.

The California Institute for Rural Studies released the COVID-19 Farmworker Study (COFS) in July. A team of 60 surveyors managed by six community-based organizations with connections to farmworker communities surveyed more than 900 farmworkers throughout the state—including on the Central Coast—between May 19 and July 20.

According to the study, California employs an estimated 800,000 farmworkers, and a majority of those individuals work seasonal positions, rarely having a full-time position. The average annual income earned is less than $18,000 a year.

An estimated 90 percent of California farmworkers were born in Mexico, and roughly 60 percent are unauthorized to work in the United States. The study found that of its 900 interviews, nearly half of the survey respondents (46 percent) reported decreased work hours and subsequent income losses during the pandemic. Undocumented workers are unable to access unemployment benefits if they are laid off or furloughed.

A little more than half (54 percent) reported costs, lack of insurance, and/or lack of sick leave as significant barriers that would prevent them from accessing health care even if they were ill.

The study includes an anonymous excerpt from an Indigenous-speaking farmworker in Santa Maria stating that where he or she works, masks weren't given to workers.

The Grower-Shipper Association of Santa Barbara and San Luis Obispo Counties stated that it has been working to provide outreach and education to its members on federal, state, and local information. Association President Claire Wineman said that in addition to ongoing outreach on workplace safety practices, the organization recently increased its outreach efforts related to the importance of using face coverings, limiting nonessential gatherings outside of an immediate core group or household during nonwork hours, and exercising safety practices during carpooling.

The U.S. Occupational Safety and Health Administration (OSHA) hasn't provided clear guidance on employers' responsibility to provide personal protective equipment to employees to protect them from exposure to COVID-19. According to the National Center for Farmworker Health, even if clear guidance was available, OSHA cannot conduct inspections or enforce health and safety standards on farms with 10 or fewer employees.

OSHA did, however, revise its guidance requiring employers to record COVID-19 illnesses that cause their employees to seek medical care or miss one or more days of work.

Hazel Davalos, community organizing director for CAUSE (Central Coast Alliance United for a Sustainable Economy) said that Santa Barbara County formed the Latinx and Indigenous Migrant COVID-19 Task Force to get pandemic-related information out into the community, but it's not enough.

"For us, I think what this has shown more than anything is education has its limits and without enforcement, the laws in the books aren't the laws in the fields," Davalos said.

Anecdotally, she said the organization has gotten calls from warehouse workers, for example, who have reached out to their workplaces' human resources departments asking for more temperature checks. Davalos said in that situation, the human resources departments reportedly responded to the workers' requests by saying, "If you don't like it, you can leave. We'll replace you."

She said CAUSE is focused on the agricultural industry's inability to follow current safety regulations and is calling for more government oversight.

"You can educate workers all day about their right to a safe workplace but when ... an undocumented person who doesn't speak English—and in the case of H-2A workers, their landlords that provide their transportation and food—tell their boss, 'Hey can you provide more protections,' and their boss tells them, 'No, I'll fire you,' what does it even matter that they knew their right?" Davalos said. Δ