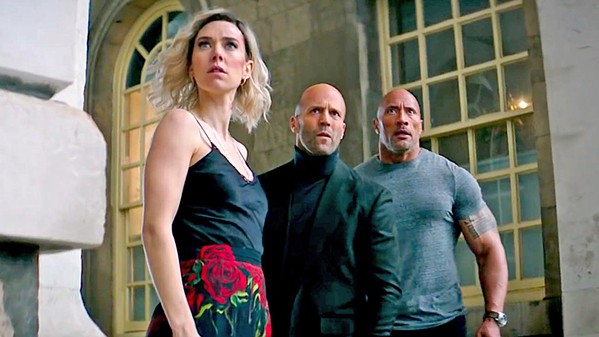 Glen I went into this film with rock-bottom expectations. The only film of the franchise that I've ever seen is the first one, 2001's The Fast and the Furious, which obviously didn't inspire me to keep watching the following seven installments. So, how did I end up going to this ninth film in the series? Mainly because nothing else new came out last Friday to choose from. Hobbs & Shaw is loud, obnoxious, over-the-top ... and entertaining and fun! The action is cartoonish, the story ridiculous, but as a summer blockbuster spectacle, it's a blast of male fantasy and fantastic-sarcastic buddy bromance. It largely works as well as it does thanks to Johnson and Statham's charisma and chemistry. Their characters are both "lone wolves," so when they're forced to team up, the insults fly ... well, fast and furious. Some effective uncredited cameos also up the comedy ante. Ryan Reynolds is hilarious as Locke, a CIA operative who enlists Hobbs. Kevin Hart shows up as Air Marshal Dinkley. Shaw's dysfunctional family dynamics—his mom, Queenie (Helen Mirren), is locked up and his estranged sister, Hattie, has been framed for murdering her Mi6 team—add some emotional heft. More heft comes from Hobbs' estrangement from his own Samoan family—who his daughter, Sam (Eliana Su'a), has never met. Luckily, the film doesn't take itself too seriously. With a genetically enhanced super villain, the film is thankfully aware of how dumb it is, and it simply goes about teeing up one outrageous set piece after another. I admit it: I had fun.

Anna You walked in with more knowledge about the franchise than I did, even with only the original film under your belt. I hadn't seen any of the films in the series, though I did take a Universal Studios tour a couple of years ago that had a whole leg of the ride promoting the eighth film. We trundled out of there in the open-air bus; I was a bit shaken and thoroughly content with never having watched them. It was obnoxious, over-stimulating, and nonsensical. My hopes weren't high after that experience, but I have to say I was pleasantly surprised. Hobbs & Shaw is still an over-the-top spectacle, but at least it's one that's a lot of fun. Statham and Johnson are funny dudes, and they play well off of each other. Hobbs is a hulking giant who can't go unnoticed even if he tries, while Shaw is all spy, able to be a chameleon and blend in. Reynolds is of course hilarious. His appearances bookend the film and bring some pretty good laughs. It's all zany action with a little bit of heart and a lot of explosions. There's tricky driving, crazy chase scenes, and helicopter vs. car battles on the cliffs of Samoa. It doesn't take itself too seriously—just what this kind of flick needs to pull off the epic outrageousness going on from beginning to end. 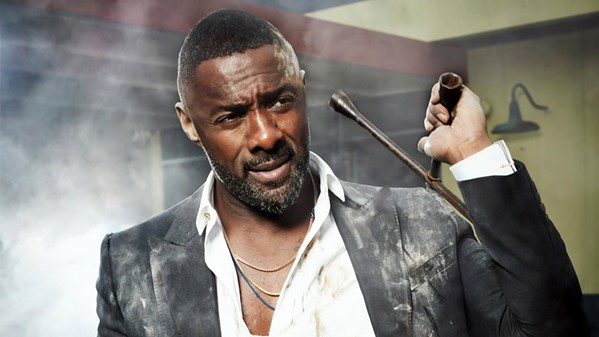 Glen Elba is effortlessly cool as the villain, Brixton. There's been talk of him as the first black James Bond! Yes, please! He's a total badass! Even though this is a male-centric film, there's also a solid female role model in Hattie thanks to Kirby, who's as fierce as she is beautiful. Watching her take on the bad guys is a joy. If you've seen the trailer, you pretty much know the story. Hobbs, Shaw, and Hattie need to "get off the grid," so they end up in Samoa at Hobbs' childhood home. This final sequence is a ballet of PG-13 violence, and when you add in the pumping soundtrack featuring YUNGBLUD, The Heavy, A$ton Wyld, Aloe Blacc, and other popular artists, the ride is a wild romp. The teenage boys seated next to us were flopping around like gasping fish in their seats. This film brought in a cool $60.8 million on its opening weekend. The two previous films—2015's Furious 7 and 2017's The Fate of the Furious—were billion-plus-dollar films in worldwide sales. While Hobbs & Shaw didn't have as strong an opening weekend as the last one, there's every reason to expect it will also surpass $1 billion. The film also sets up another sequel. These films are huge moneymakers because cars, guns, and beautiful women appeal to boys and young men. Thankfully, the filmmakers had the good sense to make this film funny, too. If you're looking for an entertaining—albeit silly—distraction, try a matinee. You may be as pleasantly surprised as I was.

Anna The soundtrack was definitely pumping; it was a great backdrop to all the action and adventure. Like many of these action flicks, the trailer features a lot of the big moments—a string of cars being whipped over a cliff by a helicopter while Hobbs holds them together by chains, the "old-school" battle in Samoa, and Elba's Brixton as the "black Superman." I'd seen all of those moments half a dozen times before we walked into the theater, but there are enough hidden surprises, and the action is so ridiculous that even knowing the best parts, I didn't get bored. It's a pretty long movie but is quick-paced enough to stay interesting. It's such a spectacle. It really should be seen on the big screen. There's a lot of money up there, might as well hit a matinee and enjoy the film how it's meant to be seen—big, bold, and in your face. Δ