A joint diving team locates the long-lost wreckage of the George E. Billings

In the Channel Islands National Marine Sanctuary alone there are more than 150 documented shipwrecks. Of those only 30 have been located and surveyed. Robert Schwemmer’s job is to go find the rest of them. 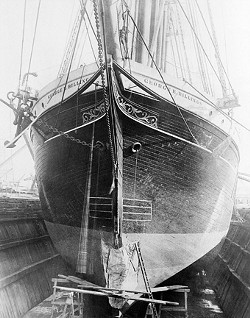 As Cultural Resources Coordinator for the National Oceanographic and Atmospheric Administration, Schwemmer is equal parts historian, detective, and wreck diver.

The guy’s a real-life version of author Clive Cussler’s Dirk Pitt. Although Schwemmer did point out that, unlike Pitt, he doesn’t have a hangar filled with classic cars.

“Closest I have is a first C5 generation Corvette,” he said with a laugh.

While he may not have Pitt’s collection of rare automobiles, he does share the fictional character’s love of maritime history and underwater exploration. As NOAA’s authority on Pacific shipwrecks from Alaska to Mexico, Schwemmer’s been diving for 35 years.

He started exploring shipwrecks in the early ‘80s; he was involved with the team that raised the turret from the Civil War-era ironclad USS Monitor off Cape Hatteras, N.C., in 2002, and he has dived on wrecks around the world.

“I was fascinated by history underwater. I wanted to know the personalities behind the ships, and started collecting the history of shipwrecks,” he said.

It was no wonder then that in February 2011 Schwemmer and a multi-agency team of divers and volunteers discovered the final resting place of the sailing vessel George E Billings, bringing to a close a hunt that had lasted nearly 20 years.

The team held off on announcing the find until last month to allow time to survey and catalog the site. As of press time, the wreck’s location is still being withheld from the public to prevent scavengers from disturbing the site until it’s been fully surveyed.

On a spring day in 1903 the five-masted schooner George E. Billings was launched in Port Blakely, Wash. Built by the Hall brothers—master shipbuilders whose ships accounted for the majority of the Pacific lumber trade—the Billings was their last and largest vessel.

At 224 feet long she weighed 1,260 tons when fully loaded with her cargo of 1.5 million board-feet of lumber—enough wood to build approximately 50 2,400-square-foot homes. She carried that cargo to destinations as far away as Australia.

Almost four decades later—after being sold out of the lumber trade and converted to a pleasure barge in the waters off Southern California—she would be burnt and sunk by her owners. Her remains would lie undisturbed beneath the waters of the Santa Barbara Channel for another 70 years, her final resting place a mystery.

“The historical documentation, meeting the descendants who share their stories and records so we learn about the people—it’s a fascinating journey,” he said.

Schwemmer has been hunting for the Billings off and on for the last 20 years.

Where did that hunt begin? With a picture caption.

The Billings spent her final years as a fishing barge in the waters off Santa Monica. According to an LA Times article from 1941 Schwemmer found, new legislation intended to eliminate offshore gambling ships required bulkheads to be installed throughout the ship. The costs involved meant retrofitting the Billings wasn’t an option.

According to the article, rather than face $500 per day in fines, the owners had the ship towed to a “lonely island reef,” set ablaze, and sunk.

That line, “lonely island reef,” was all it took to send Schwemmer on the hunt.

“We knew it was the Channel Islands. It could have been San Nicholas, San Clemente, or Catalina. We thought ‘lonely island reef?’ OK, that’s probably not Catalina,” he said.

Also at the time of the Billings sinking in 1941, Schwemmer noted, the United States wasn’t at war yet, but there still would have been a military presence on San Miguel, San Clemente, and San Nicholas islands. That eliminated the “lonely” part.

Santa Cruz, Santa Rosa, and Anacapa islands were anything but remote, situated just off the coasts of Ventura and Santa Barbara. That left Santa Barbara Island. The team had their starting point.

Even with narrowing their hunt down to the smallest of the Channel Islands, that still left a considerable expanse of sea to search in order to pinpoint the Billings’ final resting place.

Helping to further narrow the search were two pictures the team had of the Billings burning and sinking: Schwemmer’s from the LA Times article and one from Coastal Maritime Archeology Resources diver Pat Smith.

The two photographs weren’t much to work with, just grainy black and white shots of the Billings ablaze with a glimpse of the island in the background. As it turned out, two pictures—more importantly, two pictures from different angles—were all they needed.

By comparing their pictures to charts and coastal pictures of Santa Barbara Island, Schwemmer and the others were able to get a general idea of the location by noting certain features of the landscape and coastline.

By having two different angles, the team could take bearing lines—lines drawn on a chart from the landmark along a compass heading—from each of the landmarks to locate the wreck. At the very least, the team had an “X” on the chart where they could start their underwater hunt.

“By themselves, each source might not have worked, but combined they might have worked. ...” Schwemmer said and trailed off with a laugh. “Well, actually it worked!”

With a location to start its search, the team went with a multidisciplinary expedition to Santa Barbara Island in February 2011.

Due to limited funding resources, Schwemmer works closely with the National Parks Service, and vice versa, to share personnel and resources. In fact, Schwemmer said, the wreck was finally discovered on a water-sampling dive.

“It was actually [NOAA biologist] Steve Katz who found the first artifact,” Schwemmer said. “Boom! He points out this chock—what the line goes through to moor the ship to the dock—and, because of its size, we knew it belonged to a large ship.”

“For 20 years off and on this search has been going on. We’d get a lead, go to another island thinking, ‘OK, this might be it,’ only to come up empty. When we saw this large artifact, it was ‘OK … This is very compelling to associate with the Billings,” Schwemmer said.

What cinched the deal, he added, was the discovery of the mooring bits, iron pieces weighing hundreds of pounds that were used to tie the ship to the dock.

As a wooden ship—and a burnt one at that—there’s no ghostly hull sitting upright on the ocean floor. Metal artifacts like those the team discovered are all researchers have to go on when surveying a site like the Billings.

One of Schwemmer’s responsibilities is periodically inventorying wreck sites to ensure that none of those artifacts have wandered off.

Scavenging remains a threat to underwater sites, which is why they’re protected by state and federal law. Any artifacts in the marine sanctuaries are property of the state and cannot be removed.

“We have a responsibility to map the site while it’s still in an undisturbed state,” Schwemmer noted, adding, “We want to save them for future generations; we don’t want them looted.”

A thread in the ‘human tapestry’

After the announcement of the Billings’ discovery, Schwemmer got a call from Dr. Jens Birkholm of Solvang. Birkholm’s grandfather, Fredrick, was one of the last captains of the George E Billings.

Fredrick left the sea to become a banker by the time his grandson was born, but Jens had vivid memories of a stern grandfather still accustomed to a sailor’s punctuality.
“My grandfather would always sit down to dinner at 6 o’clock sharp. If the food wasn’t there I can remember him stabbing his finger on the table,” Jens said.
He recalled stories his father and uncle—both of whom sailed with his grandfather as children, his uncle until he was 7 years old—told him of life at sea.
“My uncle loved to sail ... all the trips to Australia. His mother home-schooled him, he had toys on board. It was just a regular home to him,” Jens said.

That “regular home” had its color, though. Not everyone was as willing a sailor as Fredrick.
“The ship’s cook was actually shanghaied,” Jens recalled. “Not by my grandfather, but he was a school teacher before.”
Schwemmer calls stories like Jens’ “threads in the human fabric” of the George E. Billings story.

“The people that worked the ship, their stories—this is what I love,” Schwemmer said.

Schwemmer still has work to do at the Billings site, but he’s already looking forward to the next hunt.

“I picked up a photo of SEALAB III while they were out at Anacapa. It got my curiosity going: what was going on out there?”

For the sanctuary, Schwemmer envisions a “shipwreck trail” at some point in the future.

“When I’m long gone people can hopefully go to these sites and hopefully see how it looks when they discovered it years ago,” he said.