Zac Maurais and Ben Doherty had an idea. 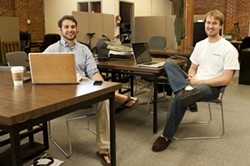 The two had been friends since attending the same high school in New Hampshire. After college—Doherty moved west to Cal Poly; Maurais went to school in South Carolina—they reconnected and decided to start a company. So they read books, learned code, and aimed to find a business incubator, ultimately landing at Doherty’s alma mater for its HotHouse offering.

“San Luis Obispo is fantastic,” Maurais said. “It’s an awesome place to learn and get to figure out what works and what doesn’t work.”

Their original startup concept involved saving yourself a trip somewhere—to the grocery store, for instance—by connecting with other people who are already out and about and might be able to pick up a gallon of milk for you. You’d pay through the app; they’d do you the “favor.”

The problem with that model, Maurais found, was that friends generally run such errands for each other all the time—typically for an IOU, if even that—and likely wouldn’t remember to use NeighborFavor. There are, after all, lots of ways to let someone at Trader Joe’s know you’d appreciate them grabbing you a dozen eggs.

“When the substitute product is texting,” Maurais said, “you’re kind of in trouble.”

The concept morphed into Favor, which focuses more on delivery of food from around town. Maurais explained that Favor will feature a list of popular local establishments with something good to offer; if you see something you like, you push a button and “magically someone’s going to show up at your door with your stuff, and you pay with the app,” Maurais said.

The businesses that sign up with Favor—“a few select merchants,” Maurais said—will put up signage advertising the service; Favor itself will bring in customers hankering for, say, a late-night burrito or tri-tip deal driven to their door.

Maurais explained that users will pay $5 (in addition to the cost of the meal they’re ordering)—$2 of that will go to Favor, and the remaining $3 will go to a minimum tip for the driver. The delivery drivers are technically independent agents working for tips; they apply through the app and go through a screening process before being approved to cart tasty treats around town.

College students and young, working professionals have been the app’s main audience so far, Maurais said. Users can share their love for food delivered to their dorm via social media or actively spread the word as a company rep by handing out promo gear—T-shirts, postcards, and the like—on their own.

The duo is looking to launch in a bigger city within a couple of months. They’re eyeing either San Francisco or Austin as the next metropolitan market for their service, mostly because both cities have large student populations.

Visit neighbfav.com, which still has text on the original app, but should redirect to the new model soon. For more information on Favor, call 1-603-235-8468. They also have an office at 955 Morro St.

The Five Cities Dog Park Association is holding its annual garage sale to benefit the Arroyo Grande Elm Street Off-Leash Dog Park from 8 a.m. to 1 p.m. on March 2. The group is asking people to bring donated items—each marked with a suggested donation price—to the event the morning of the garage sale, between 6 and 8 a.m. You may also donate something earlier in the week by calling 270-6364. For more information, e-mail info@fivecitiesdogpark.org.