Local talent draws from within 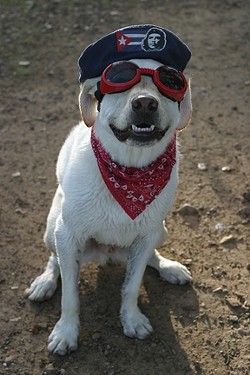 It’s 8 a.m. on Saturday, March 27, and I’m at Laguna Lake off-leash dog park for the first ever Laguna Dog Art Show. Canine and objet d’art lovers are packed in thick, vying for a look at the fecund display of dog sculptures, many being created on the spot.

Unlike cat painting, a phenomenon that’s generated such books as Heather Busch and Burton Silver’s Why Cats Paint: A Theory of Feline Aesthetics, dog sculpture is a little known movement, but for a small and growing group of aficionados, it’s perhaps the most fascinating of all art-based animal anthropomorphic fantasies currently recognized by the American Journal of Psychiatry.

Hey, there’s Boxer owner Elwood Lempher, whose little guy is standing proudly next to his work of art: “Untitled No. 688.”

“I think a lot of Buster’s talent comes from his diet,” says Elwood, whose gray-tinged curls frame his face like the poorly designed Roman columns of some ruin now unrecoverable to archeology. “That and his 170-beats-per-minute heart rate. He’s really more a Jackson Pollock-style expressionist than a sculptor, per se. When he starts walking while he’s making ‘art,’ it can really get interesting and drippy.

“Honestly, I think Buster may be Pollock,” continued Elwood. “You know, like a reincarnation. First, obviously, is his talent and style—so Pollocky. And then his addiction! At home, the humping never stops! See this worn spot on my slacks? Yes! Seriously! He’s humping holes in my pants! I know, I know … at least it isn’t alcoholism.”

Oslo, a massive Newfoundland whose walrus-like drools dangling from his jowls make him look like a furry Count Dracula, trots nervously near a patch of freshly shorn grass, seemingly considering both the terrain and his competition. To this observer, there seems to be considerable concentration building behind Oslo’s bulging Newfie forehead. Suddenly tapping into the muse, Oslo’s creation is complete—an epic gesture on par with Mount Rushmore or the smaller of those three pyramids in Egypt. Holy cow! That’s not a sculpture; it’s an installation! The judges certainly have their work cut out for them today.

Full disclosure: My own dog, Elmer, will also contribute to today’s exhibition. To be honest, art is more my thing than his, but he’s got that darn need to please. Good for him for playing along, eh? More of an athlete, he’d rather be fetching the ball over and over again until I throw it so much my elbow gets that hurty feeling it used to get when I was playing tennis a lot.

Anyway, Elmer’s primed and ready! Yesterday my friend Keith Bond came over and we were going to grill a couple New York strip steaks, but when I went to turn the grill on, Elmer jumped up and snatched Keith’s steak off the cutting board and ate it.

“Keith,” I yelled, “Elmer ate your steak! Why weren’t you watching?!?” 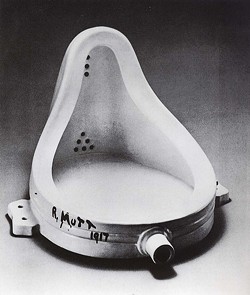 “I didn’t know I was supposed to be watching,” said Keith, the dumb ass.

Anyway, I split my steak with Keith. Elmer went outside and threw up Keith’s steak, and then Elmer and his dog Mavis (long story!) re-ate Keith’s steak. I mention this because I’m expecting something special from Elmer today. That steak he ate cost, like, six bucks!

Awesome! There’s Diane Anthony and her trio: Mike is a Labrador mix with a fear of loud noises, Jordie is a deaf (irony, right?) geriatric and nail biter, and Phoebe is a divorced mother of five with an invisible butthole. Together they’re an art collective with a Marxist-Dadaist aesthetic.

Here’s a fellow I haven’t seen before, whose glowing orange Vizsla has created something special under a pine.

“That’s quite a design,” I compliment.

“Huh?” he grunts, scooping up Domonkos’ addition to the exhibition in a complimentary Muttmitt™ before knotting the top and tossing it into the trash.

“Whaaa! Aren’t you going to wait for the judging!” I blurt incredulously.

What’s this supposed to be, performance art? Some kind of comment on the ephemeral nature of creation? Vizslas! So pretentious! And the lengths some of these dog nuts will go to! What a cheap stunt!

Hey … a urinal? Oh, I get it! Ha! But if art really does imitate life, it would have been a commode, right Duchamp? But I digress.

“Good boy!” I encourage as he looks nervously over his shoulder.