Fed up: A former Chipotle employee is suing over allegations of racial discrimination 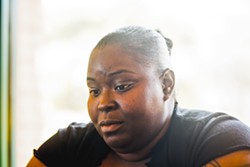 It was mid afternoon and Janeka Samuels had her first opportunity to take a break since starting work at 7:30 a.m.

As the only manager working at one of two Chipotle locations in San Luis Obispo, she wasn’t able to take a break unless another manager was there to take over. And when the regional manager of Chipotle’s Central Coast locations, Ben DeBilzan, arrived, Samuels said she asked him for a break. In response, he asked if she had seen the show Roots.

“He said, ‘If you ask me for a motherfucking break one more time I’m gonna hang you like in the show Roots,’” Samuels told New Times.

The incident was later recorded in a complaint to the California Department of Fair Employment and Housing, which led to one of two lawsuits Samuels has lodged against DeBilzan and Chipotle. Another former employee confirmed Samuels’ account in a sworn witness statement obtained by New Times. A former Chipotle manager who worked with DeBilzan and Samuels, Jake Whiddon, gave a similar account.

“My personal recollection was, ‘Wow that’s extremely racist and not very positive at all,’” Whiddon told New Times, adding that it was his job to speak with other witnesses and collect a record of the incident, but DeBilzan told him not to report it higher up the chain of command.

It wasn’t the first time DeBilzan had brought up Samuels’ race, she alleges, and it wouldn’t be the last. In a town where African Americans account for about 1.2 percent of the population—less than one-fifth the statewide average, according to most recent census—Samuels claims she was often reminded that she was very clearly in the minority.

“I was always told that I was black and I would never get a job in SLO,” she said.

And on March 4, Samuels filed her first lawsuit against DeBilzan and Chipotle, claiming that she was discriminated against because of her race. Samuels alleges she “was frequently subjected to racially discriminatory and humiliating comments by her supervisor, Ben DeBilzan, who would state that plaintiff was ‘lucky to have a job’ because she is black.”

In another incident, Samuels said she was given a nametag, as are all employees. Instead of her name, Samuels’ tag had a sticker with the word “black beans rule.” She said DeBilzan gave her the tag, and when she protested he told her if she didn’t wear it she would have to clock out and go home. Whiddon confirmed that DeBilzan gave her that nametag, and said other employees received similar tags.

“It was pretty much if Ben could make a racial slur out of your name or some sort of Chipotle pun he would do it and put it on your nametag,” he said, adding that DeBilzan gave him the nickname “Chester the molester” because of his mustache. 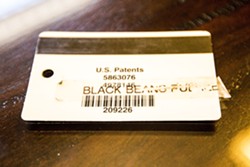 Samuels moved to SLO from Pasadena after her husband was sentenced to prison at the California Men’s Colony. Her unemployment benefits were about four months away from expiring when she was hired at Chipotle in March of 2010. She was eventually promoted to assistant general manager, what is referred to internally as an “apprentice.”

By the time Samuels was fired in October 2013, she had been yo-yoing between work and doctors, taking medical leave for what she claims was anxiety brought on by her experiences at work. Samuels said she was fired only after contacting local attorney Jeffrey Stulberg, which she said she did after making multiple complaints to the company over DeBilzan’s comments about her race, weight, and the fact that her husband was in prison. Her history of complaints culminated in an email she sent to the company’s co-chief executive officer, which she said was supposed to be confidential, but DeBilzan found out and confronted her. She remembers him telling her that she could be fired at any time “and I’ve got to always remember I’m black in a white town.”

Afterward she began to cry and apologized to DeBilzan for sending the complaint, fearing for her job.

“At that point I knew my job was going to eventually be on the line and I thought, ‘Oh my God, how am I going to pay my bills?’”

Over the course of her work there, Samuels said she was diagnosed with anxiety, and later consulted with Stulberg while out on medical leave. When she returned to work, she was fired in October 2013.

On Nov. 5, 2013, Samuels filed a complaint of discrimination with the California Department of Fair Employment and Housing and was issued a “right to sue” notice. In that complaint, Samuels alleged DeBilzan told her he wanted to hang her and had said she should take a position in Southern California “because I am black, living in San Luis Obispo, and that no one would ever like me here.”

“Generally speaking, if claims are made about inappropriate behavior on the part of any of our employees, we conduct a thorough review. If we find merit to the accusations, we take the appropriate steps to address the situation, and disciplinary action that can include termination of an individual for violating our policies,” Arnold said in an email response.

Whiddon told New Times that many complaints were lodged against DeBilzan, but he was never reprimanded.

“Janeka was one of the most vocal about it because she was not only offended but told him to stop and reported him to other people,” he said.

Chipotle Denver-based attorney Charles Cavanagh entered a general denial in response to the claims in Samuels’ lawsuit. Among the company’s defenses, Cavanagh wrote that Samuels failed to exhaust Chipotle’s internal complaint-resolution procedures and failed to exhaust applicable administrative remedies. He didn’t respond to a call for comment.

DeBilzan didn’t return a call to a number listed as his home or return a message left at his work.

Shortly after filing her case in SLO County, Samuels filed another case against Chipotle, this one a class action in Los Angeles County Superior Court alleging the company failed to pay overtime, failed to provide breaks and meal periods, and failed to pay wages in a timely manner after her termination.

According to witness statements submitted in Samuels’ SLO County case, other employees said they were instructed to work long hours without breaks and clock out for breaks even if they were still working. One witness wrote that when employees knew “corporate was coming … those days we would leave around 3 a.m. and would have to clock out by 11:30 p.m.”

Chipotle had not filed a legal response to the class action as of press time.

With no luck finding another job locally, Samuels said she’s preparing to move back to Pasadena, though she’d rather stay where she is.

“It was one person at the company that did me wrong,” Samuels said. “Besides that, I had a lot of love for the company.”

With an openly gay CEO, adoration from financial investors who compare Chipotle to Apple’s level of perfectionism, and a reputation for environmental stewardship, Samuels said her experiences at the San Luis Obispo Chipotle locations seemed to contradict the company’s public image.