In a complaint filed December 2019, a national trade association claims Proposition 12, a voter-approved law, will affect the sale of whole pork meat from out-of-state producers to California.

The law that went into effect on Jan. 1 creates new minimum requirements for farmers to provide more space for egg-laying hens, breeding pigs, and calves raised for veal. 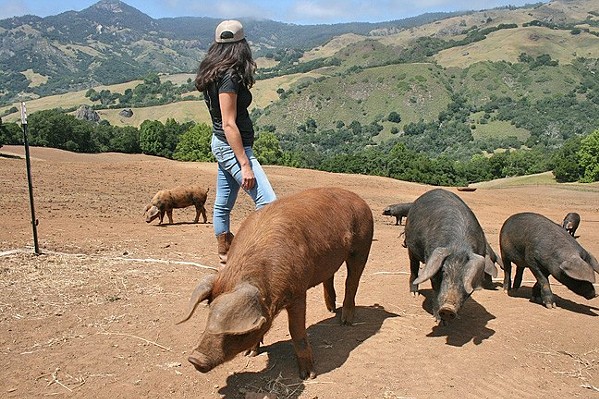 While the pigs requirement may not directly impact San Luis Obispo County farmers, it could change their ability to purchase pork from farms in other parts of the U.S. SLO County has a large beef and veal production industry but a small number of dairy farms, egg farms, and commercial pig farms.

According to the most recent 2018 Annual Crop Statistics, the number of cattle and calves sold during 2018 increased by 4 percent to 44,900. The total gross value for cattle in the county is $43.8 million. Eggs, goats, lambs, sheep, pigs, bees, honey, and milk are lumped into the same category, and collectively the total gross value is $4.8 million.

A San Luis Obispo County Cattlemen's Association official told New Times that most of the hog farms on the Central Coast are small businesses that focus on free-range methods.

The complaint filed last December against Karen Ross, secretary of the state's Department of Food and Agriculture; Sonia Angell, director of the state Department of Health; and California Attorney General Xavier Becerra alleges that Proposition 12 changes how pork is raised and marked in the United States.

Its requirements, the complaint states, are inconsistent with industry practices and standards, generations of producer experience, scientific research and the standards set by other states.

The complaint argues the law will directly affect pork farmers and producers throughout the U.S. because they breed or raise pigs, which don't follow the law's requirements, that may be sold in California.

An independent hog producer from Logan, Utah, said in the complaint that he keeps his sows in individual stalls until he confirms they are pregnant or through gestation. If he complied with the proposition, the complaint alleges that he would lose the ability to provide a peaceful environment for the sows to recover and regain weight from their previous litter. Instead, the producer would be required to subject them to stress and fighting with other animals. He sells about 600 pigs per week under a five-year contract to a packing plant in California.

Proposition 12 forbids the sale in California of whole pork meat from hogs of sows that are not housed in conformity with the laws' requirements.

According to the complaint, California's pork consumption makes up about 13 percent of the national market. In-state sow (female pig) breeding scarcely puts a dent in the demand for pork consumed within the state. Δ