Feed me! Feed me!

Little Shop of Horrors really is one of the loopiest shows ever. Think about it: a talking plant that communicates its demands for human sacrifices by belting out sultry, guttural R&B tunes. Juxtapose this monstrosity against the pastel cuteness of a pink flower shop before panning out to take in the seedy sights of the surrounding Skid Row, and you’ve captured the setting—and inherent absurdity—of Little Shop.

There are several shows that play with the eggshell-surface-with-dark-seething-underbelly idea (Tim Burton’s work leaps to mind), and to a degree, this one does that, too. But here, that eggshell surface is limited to the four pink walls of the flower shop. Outside, gritty reality lurks with cartoonish menace—but the real threat is tucked away inside that pastel haven.

It’s a dark and wonderful premise. As the play begins, we find Mr. Mushnik (played by Mike Mesker) and his shop hands Seymour and Audrey (Ryan Cordero and Jennifer Malman) lamenting the day’s poor sales. They curse their humble lot in life in the song “Skid Row (Downtown),” accompanied by the “urchins,” three tarty-looking girls (Natalia Berryman, Molly Dobbs, and Julia Siebert) who set the tone of each scene with their dancing and backup vocals. Encouraged by Audrey, Seymour presents to his cranky boss an interesting botanical find, a mysterious plant resembling a Venus flytrap. He’s christened it Audrey II, after his coworker whom he clearly adores. The placement of Audrey II in the shop window begins to draw customers’ interest. But despite Seymour’s care and attention, the plant seems to be wilting! While fussing over Audrey II, a pricked finger yields a single drop of blood, and the plant perks up, thirstily opening its trap in search of more.

Though only Seymour knows the secret behind the plant’s growth, this rapidly growing botanical curiosity becomes the talk of the neighborhood—and beyond. Soon television and radio talk shows are abuzz about Seymour’s find, which can only be seen at Mushnik’s Skid Row Florists. Business is booming. The plant is bigger every day. Seymour’s hands are covered in bandages.

Cordero is believable as the timid, innocent florist, and we empathize with his character’s plight as he secretly lets Audrey II suck him dry because he thinks it’s the only way to catch the human Audrey’s eye. 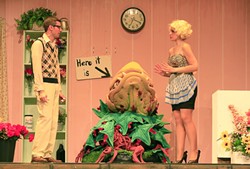 And as Audrey, Malman is excellent, bringing a certain innocence and charm to her bottle-blonde character. Mike Mesker masters a manipulative, miserly Mr. Mushnik.

There’s a lot of campy, satirical fun to be had with this show, something I wished I could have seen a little bit more of in Sorcerer Productions’ staging of Little Shop of Horrors. Don’t get me wrong; this is a great show, with a talented cast and an eye-popping, skillfully employed set. But like that little plant, once I got a taste of fake blood, I just wanted more and more. More wackiness, more camp, more gore, more laughs, more 1950s science fiction god-awfulness. There are many hilarious scenes in this show. But sometimes, dialogue that could have been comedic gold was encumbered by too-conservative acting and timing that felt somehow unnatural. It was a slow start, but as the plant gained strength, the performances began to pick up as well.

With the appearance of Audrey’s abusive boyfriend, a sadistic dentist named Orin Scrivello, the show livens considerably. Jeff Salsbury, who also carries several minor roles in the show, is great as the asshole Scrivello, who embodies everything that is reviled in loser boyfriends and pain-loving dentists alike.

And then, one regular, nondescript little evening when Seymour is by himself in the shop, the plant speaks.

The words become a song—and a very different one from the pansy falsettos and doo-wop ditties that have soundtracked the production thus far. It’s a sultry, deep sound, demanding blood. It’s the id set to rhythm and blues.

Audrey II is the show’s true star. Voiced by Josh Feldman, designed by Randal Metz and Dennis Lancaster, with poor Michael Rogers sweating away inside of her plush leaves, the bloodthirsty plant is an impressive feat. Audrey II is a delight in every scene. Just remember that when it starts to set its sights on people we care about.