Feeding the table: Sharing is the best part of eating at the new SLO Brew

There’s a raging intensity of hunger that sinks in after you’ve just rocked out to one of your favorite bands. A need to feed must be quenched. Right now!

Endorphins are high, friends are plentiful, and the beer is flowing. This is the moment that SLO Brew Executive Chef Thomas Fundaro lives for.

It’s that joyous moment when you all slam into a booth and order with abandon. When you grab a handful of your pal’s sweet potato fries and swipe them through a glistening blob of house-made ketchup or your buddy spoons a helping of your shredded chicken chile verde onto her grass-fed beef burger.

Everyone’s chattering, and no one’s keeping track of who’s eating most of the duck nachos topped with sweet corn and crumbly feta. When the last slice of green pizza (the one with spinach pesto, ’shrooms, and leeks) is gone, you order up another one, pronto.

This is food that’s traded with gusto, like baseball cards or pogs that mixes and matches to create a meal that hits all the pleasure centers of your brain: Spice. Umami. Salt. Freshness. Tang.

It’s food that feeds your crew, your sense of adventure, and maybe even that guy who you kind of know from the Elks Lodge. Room for everyone, right?

Basically: This is real grown-up pub grub for the craft beer-swilling set.

“If you are coming into SLO Brew to drink beer, you will find something pub-like to eat that meets you where you’re at,” Fundaro said of his new menu. “If you want comfort, we have killer fish and chips with housemade remoulade. If you want a beer with a cheese board, we’ll have that but none of it will ever seems pretentious.”

The new menu at the new SLO Brew has all that you’ve come to expect from the old Garden Street locale, just remixed through the sensibilities of a tried-and-true chef known for balancing elevated cuisine with everyman approachability.

If you don’t know Fundaro, you may have encountered his past handiwork at Villa Creek Restaurant and Trumpet Vine Tapas and Wine Bar in Paso Robles. He’s also lent his talents to farm-fresh restaurants in New Mexico as well as at Eli’s Manhattan and the Vinegar Factory in New York City.

Now that SLO Brew’s food isn’t holed away upstairs on Garden Street—and is, in fact, in close proximity to Novo and other diverse downtown restaurants—the chef wants to up the ante. 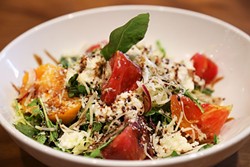 How has he elevated those pub flavors to meet downtown’s changing cravings? His burger patties are hand ground with brisket, pork, and bacon and topped with a fried egg. His “chicken sandwich” is a love letter to Nashville’s cult classic, “hot chicken.” His pizzas are thin-crust and modern, with just the right chew when topped with pancetta, fresh greens and lemon vinaigrette. Dough is made from scratch a few times per day.

Thanks to years of working with local farmers to elevate his creations (he knows where to find the best shishito peppers in Paso), the chef believes in something similar to the Hippocratic oath: “First, do no harm to the ingredients.”

But can farm-fresh still be fun? Rock ’n’ roll, even? Hell yeah, it can. I have lived to tell the tale, and it’s a sweet one. Fundaro’s chicken and waffles with seared stone fruit is a must-try. It kind of says it all.

The main thing that’s happening here, the chef said, is that the food is finally getting its rightful spotlight next to the stage.

Fundaro—like so many longtime Central Coast locals—remembers the old SLO Brew as a concert venue, first and foremost. He remembers spending his 40th birthday with The Devil Makes Three. He had an awesome time, but it wasn’t so much about a music and dining experience. 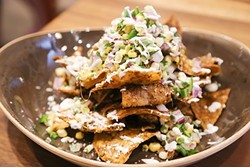 “It felt a little like music first, everything second,” Fundaro said. “So when the owners spent the time, effort, and money to rebuild this space and create a new kind of venue; they wanted the overall ethos of the space—music, beer, and food—to be more equal.”

At 27 years old and counting, the Brew is downtown SLO’s longest running brew pub since prohibition. Obviously, beer and booze are still part of the equation, and you can find all the in-house beers you remember on tap (Blonde Ale, Wave Wrangler Session IPA, Reggae Red, and Cali-Weisse) alongside notable craft offerings and cocktails. Music is also still happening on the new brew’s smaller stage, booked by the folks at the Knitting Factory, Hollywood.

Those lamenting over what the old music venue was (myself included) should know that owner Hamish Marshall has yet to complete his plans. This month, The Rock Brewery and Taproom is slated to open near the SLO airport with a 30-barrel brewhouse, biergarten, kitchen, and ample space for outdoor concerts.

Also part of that plan? A self-serve beer tap similar to that of downtown SLO’s Blast 825 Taproom.

Fundaro admits he’s a wine and tequila guy, and only recently got into the world of craft beer.

“The high hops trend was confusing to me because I felt it was kind of a palate killer. But that was until I started drinking hoppy beers with high cream cheeses and strong varieties like Stilton,” Fundaro said. “So, I went over to Sophie’s [of Fromagerie Sophie] and sat around and ate cheeses and drank beer. What I found was that those high hop beers had a really cool cleansing property. It cuts through and you can move from one cheese to another.”

This inspiration has led to a forthcoming beer and cheese board that has the power to unite foodies, college students, and local farmers. Because, really, … isn’t that what grabbing a beer is all about?

“In the wine world, it’s all about your foie gras or my cheese plate,” Fundaro said. “With beer, it’s not like that. Everyone eats. Everyone shares. That’s what my food is all about. At the new SLO Brew, it’s about feeding the table.”

Hayley Thomas wants to be part of your table. Can she pull up an extra chair? She can be reached at hthomas@newtimesslo.com.