Harvey, a 1944 play written by Mary Chase, will run at the Cambria Center for the Arts Theatre until Nov. 24. For show times, visit cambriacenterforthearts.org/theatre.

A play about a grown man with an imaginary rabbit friend sounds like it would make a great children's story. While this is indeed the storyline behind Harvey, a 1944 play written by Mary Chase, the deeper implications of this production are far more thought-provoking and nuanced than what you'd likely get from a tale for kids.

The Cambria Center for the Arts Theatre's (CCAT) production of Harvey, with showtimes through Nov. 24, is a reminder that the social commentary from a play written 75 years years ago can still ring just as true today. But being a comedy at its core, CCAT's Harvey is sure to make you laugh as much as it will make you think. 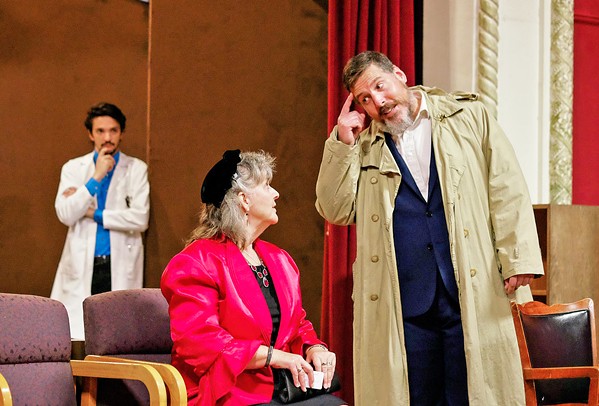 The story follows the social climbing mother-daughter duo of Veta Louise Simmons (Laura Richie) and Myrtle Mae Simmons (Sarah Ruth Smith), who are both terrified that they will be judged by others for the behavior of Veta's brother, Elwood P. Dowd (Hank Wethington). Elwood is a perfectly nice man—in fact, he's exceedingly nice, making friends everywhere he goes and handing out his business card to complete strangers. But there's just one thing about Elwood: He claims to have an invisible friend named Harvey who is a rabbit.

"Harvey's a pooka, which is an imaginary being from Irish folklore that is always large," producer Jill Turnbow explained to New Times before opening night on Nov. 2.

Everywhere that Elwood goes, Harvey follows. When Harvey needs to fit through a door frame, Elwood helps him bend his rabbit ears down. When Elwood enter a room, he carries two coats and hats—one of the hats, of course, bearing two small holes for Harvey's ears. And most mortifying of all to Veta and Myrtle: Elwood introduces Harvey to everyone.

The final straw for the Simmons ladies occurs one night when they are throwing an upscale house party. Veta believes that Elwood will not be in attendance, and she finds herself finally able to entertain guests and accrue the social status she desires. But then Elwood shows up, and with him is Harvey. The party turns to chaos, and a distraught Veta decides she must admit Elwood to a sanitarium (details like this remind us that the play takes place in the '40s).

After some comedic twists and turns, including Veta taking a spin in the sanitarium herself, this silly, feel-good production ends with Elwood's family members accepting him for who he is: a man with a pooka.

But sprinkled throughout the mostly lighthearted production, some serious themes do persist. For one, it's clear that Elwood's character has an affinity for drinking—one strong enough to make you ponder why he really sees his pooka.

"The joke with Ellwood P. Dowd is, does he really see Harvey or is he just a lush?" Turnbow said. "He does drink quite a bit, and the play takes place after Prohibition. It's timely."

Another piece of noteworthy historical context is that Harvey was written and is set right after World War II.

"Mary Chase wrote it to help rebuild optimism," said the show's director, Kelli M. Poward. "At the end of World War II, there was a huge depression, and she wanted to provide a positive outlook. ... In a world where there's so much cynicism and upset, [it brings] that innocence and purity back. Elwood's got some incredible quotes in this play, and the goofiness was really making comedy happen at a time when so much of the world was in an awful depression."

Despite being written so long ago, Turnbow said Harvey still works today as a source of comedic relief from the difficult realities that people face.

"It's so needed," Turnbow said of comedies like Harvey. "We've done some serious shows, but in this day and age nobody will come. People say, 'I don't want to see it. I don't want to hear it. Just make me laugh and entertain me.' So we've kind of shifted gears a bit to try and do that, which is one of the reasons we did Harvey. It's a feel-good show."

Poward said she hopes the show will encourage the audience to be more like Elwood.

"The ideal audience takeaway is that optimism is so important for everything we are in the world," she said. Δ